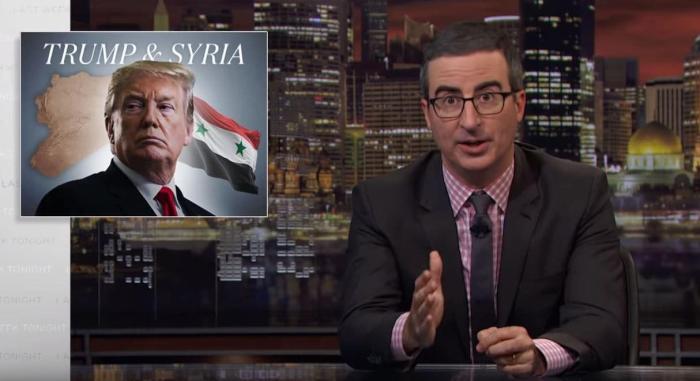 Dustin already answered this question this morning, but there still seems to be a bit of disagreement about how to welcome the President of the United States to a baseball game. So the answer is: Did the sitting POTUS just ignore his advisors, generals, and political allies to order a military withdrawal that killed over a hundred civilians?

Now you might have noticed that my answer wasn’t really an answer but a question designed to make the President and his recent actions look bad. You’ll further notice that when I said “design” I meant “place words in an order that reflect what happened because he’s really that terrible of a person.” There’s also a very simple reason why Trump is a terrible person, and why it’s OK to boo him. He doesn’t think non-white people are of any inherent value unless they can do something for him. That’s not me making wild, Liberal inferences. That’s him saying that a country committing acts of war and genocide against an ethnic minority is the same as two kids fighting it out on the playground.

As Oliver points out, the metaphor fails to accurately portray how people should respond to both warfare and bloodshed, and to children fighting. But, and this is important, it fails as a metaphor. Let’s really dig in.

For starters maybe let’s not compare two nations we’d presumably like to have diplomatic relations with as “kids,” shall we? Especially if one of those countries has what appears to be the roots of the oldest-known civilization. (Of course, Trump doesn’t mean that the countries aren’t old, he means that they’re backward and unsophisticated because they’re in the Middle East, but they don’t have a single Trump tower.) So he’s laying on the condescension pretty thick.

Secondly, have you never been around children, Donald? Were you never a child? Have you seen humans being humans? Because no, that isn’t the way that that ever works. Does anyone remember the last time one kid kicked another kid’s ass, and the kid doing the ass-kicking thought, “Man, that was terrible. I better never do that again?” Because none of the bullies in my high school got that lesson, which underlines Trump’s (non)thinking on the matter. Because both Turks and the Kurds are (as Donald has recently learned to call them) People of Brownness, both sides are not advanced like us, and therefore on equal footing. Again, both “kids,” neither of which could do substantial harm to the other. Except that ain’t it at all. One of the kids is much bigger and stronger than the other, and the other is your buddy, who you pretend you don’t see getting his ass kicked. Except instead of getting his ass kicked, your buddy and ninety-nine of your other friends are being f*cking shot and murdered on a roadside. This is clearly the only way to teach THE GODDAMN MIDDLE EAST THAT WAR IS A BAD THING. BECAUSE I CAN’T THINK OF A SINGLE OTHER F*CKING TIME IN RECENT HISTORY WHEN SYRIA, IRAQ, OR TURKEY WOULD HAVE BEEN EXPOSED TO THE HORRORS OF WAR.

On the plus side, with Donald’s genius “just let them kill each other lolz” plan, at least Jared is out of a job.

← All The Reasons People Are Unsubscribing From Louis C.K.'s Mailing List | Recap: What the Hell Is Going On in the 'Watchmen,' Episode 2? →