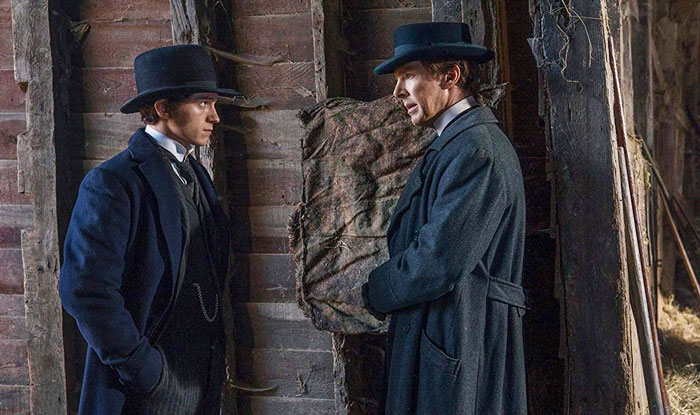 What's The Story Behind 'The Current War's Climactic Execution

The Current War focuses on the battle of watts between electric pioneers Thomas Edison and George Westinghouse. It was a war of words and ideas that turned lethal with the horrific death of William Kemmler, the first man to be executed by the electric chair. The film focuses on how Edison used Kemmler’s impending death as a propaganda tool to demonize Westinghouse’s alternating current. If you’re curious about the man behind this macabre moment in history or his crime, we’ve got you covered.

In The Current War, Kemmler is introduced dramatically. It begins with a montage of film test footage of animals walking. This alludes to the grim experimentation that Edison was secretly conducting to prove correct his claims that Westinghouse’s system could be lethal. Alongside stripes of pigs, dogs, and elephants striding, a man appears. His stripe takes over the frame, then he enters a police station, splattered in blood. He confesses to killing his wife.

In real life, Kemmler murdered his common-law wife, Tillie Ziegler, with a hatchet. A vegetable peddler from Buffalo, New York, Kemmler was known for his drunkenness. According to an account from the New York Times, it was after a night of binge drinking on March 29, 1888, that he returned to the home he and Ziegler shared and started a row with her. Kemmler accused her of theft and plotting to run off with another man. At one point, Kemmler walked out of the home to their barn. He returned with the hatchet. After beating Ziegler to death with it, he did not walk to the police station, but next door to his neighbor’s home, where he promptly confessed to his crime. His trial proceeded quickly, and Kemmler was convicted of first-degree murder on May 10, 1888. He was sentenced to death three days later. But the mechanizations that would lead to his infamously gruesome death were in the works long before.

It all began with a dentist, also from Buffalo. Alfred Southwick became fascinated by the idea that this new-fangled electricity could be used for execution after he’d heard about a man who’d died from touching a generator. In The Current Wars, Southwick’s title card introduces him as a human rights advocate, which is true to his motivations. In the state of New York, death sentences were executed by hanging, a process Southwick saw as flawed and inhumane. If the neck was not successfully snapped in the fall, the executed would be forced to slowly asphyxiate, which could take as long as half an hour. In his mind, a quick jolt of electricity would make for a quick death. So Southwick began designing his electric chair as early as 1881.

Edison got looped into Southwick’s designs in 1887, when the aspiring inventor wrote to the wizard of Menlo Park seeking advice. At this point, Edison was passionate about his rival’s product of fatal electrocution. As seen in the movie, Edison suggested that death by electrocution be called getting “Westinghoused.” However, Edison initially rejected Southwick’s proposal, as he strongly opposed capital punishment. But when the dentist tried again a month later, Edison was more forthcoming.

In a letter, Edison wrote:

The most suitable apparatus for this purpose is that class of dynamo-electric machinery which employs intermittent currents. The most effective of these are known as ‘alternating machines’ manufactured principally in this country by Geo. Westinghouse.

Southwick surreptitiously acquired a Westinghouse Dynamo. Edison helped further by funding the electric chair’s construction by engineer Harold P. Brown. By 1889, the buzz around this invention grew to the point that New York’s Electrical Execution Law was passed, which legalized the new form of capital punishment. The resulting device that would be used on Kemmler involved two electrodes, which would affix from the Dynamo to the condemned’s head and back to deliver an efficiently lethal shock.

Westinghouse wanted to stop his device from being branded “the electrocutioner’s current.” He hired attorney W. Bourke Cockran to file an appeal of Kemmler’s death sentence. The case went all the way to the Supreme Court, but ultimately Kemmler lost. The justices didn’t believe such an execution would qualify as “cruel and unusual punishment.”

The sentence was carried out on August 6, 1890, in Auburn, New York. Kemmler arose at 5am. He dressed in a suit and tie, ate breakfast, and prayed with a chaplain. He was then led by the warden to the last room he’d ever enter. An oak chair sat before him. 17 witnesses—which included members of the press—looked on as a bald spot was shaved atop his head to clear a space for the damp sponge and electrode. A small hole was cut into the back of his suit to allow for the other.

The New York Herald reported there was some debate between the warden and two attending doctors about how long the current would need to run to kill Kemmler. After deciding on “ten seconds at least,” one of the doctors asked if anyone present had a stopwatch. The sheriff lent his.

Witness reports say Kemmler did not wail or resist. He did straighten his necktie, a narrow linen affair adorned with white squares and black checks, as he took his seat. He made a statement to those present, “Gentlemen, I wish everyone all the good luck in the world. I believe I am going to a good place. The papers have been saying a lot of stuff that ain’t so. That’s all I have to say.”

The switch was flipped. For 17 seconds, 700 volts were sent through Kemmler’s body. Then, the current failed. The two doctors told the room the man was dead, pointing to the “remarkable appearance” of his nose as proof. But Kemmler was still breathing, a dawning and disturbing realization that horrified the onlookers. One screamed, “Great God, he is alive!” Another shouted for the device to be turned back on. In the interim, the electrodes had already been removed. There was reported fumbling to replace them. According to The New York Times, “the witnesses were so horrified by the ghastly sight that they could not take their eyes off of it.”

The second charge was upped to 1010 volts, and applied for two minutes. A sizzling sound could be heard. Smoke snaked from the roasting body and filled the room with the stench of burnt hair and charred flesh. Finally, the charge was turned off. Kemmler was dead. An autopsy would later show the electrode on his back had burned so deep his spine was scorched. Yet in the room, Dr. Fell declared “Well, there’s one thing about this. The man never suffered a bit of pain.” Dr. Spitzka agreed, telling the press, “The man was killed instantly, I think.” But the reporters had seen the breathing, the blood, the horror of it all.

The newspaper coverage condemned the disastrous experiment, detailing the bumbling of the doctors and the botching of the execution. The New York Times’ headline declared “Far Worse than Hanging: Kemmler’s Death Proves an Awful Spectacle.” The Herald wrote, “The scene of Kemmler’s execution was too horrible to picture. He died the death of Feeks, the linemen, who was slowly roasted to death in the sight of thousands.”
Yet Southwick counted Kemmler’s execution as a success, declaring, “We live in a higher civilization from this day on.” Edison admitted there was some “bungling,” but remained positive, telling the press, “I think when the next man is placed in the chair to suffer the death penalty, that death will be accomplished instantly.”

Westinghouse was frank, saying, “They would have done better with an axe.”

In The Current War, the film ends with Edison shifting focus to his moving picture camera. However, Edison didn’t move on from his grudge with Westinghouse. To continue to stain the AC current that Westinghouse and Nikola Telsa favored, Edison used his new cameras to capture the effects of electrocution on living things, most infamously recording the murder of Topsy the elephant in 1903. Lesser known is that in 1901, he made a narrative film that re-enacted a man’s execution by the electric chair, though not Kemmler’s.

The film focuses instead on the execution of Leon Czolgosz, who assassinated President William McKinley on September 6, 1901, again in Buffalo, New York. Gizmodo’s Matt Novak recently rediscovered the forgotten film in the Library of Congress; he notes the onscreen re-enactment of the execution lasts 30 seconds and goes smoothly. There’s no smoke. No “bungling,” and it is notably 2 minutes shorter than Czolgosz’s actual electrocution. With this film, Edison created the perfect execution he’d promised the press. Essentially, he made a commercial, which toured the US in 1901 and 1902, helping normalize the electric chair to the public by whitewashing over its horrendous history.

The electric chair went on to become an incredibly popular form of capital punishment in the United States. Over the last century, many states have phased out this form of execution. However, the electric chair is still used in Alabama, Florida, South Carolina, Kentucky, Tennessee, and Virginia. Thanks to Edison.