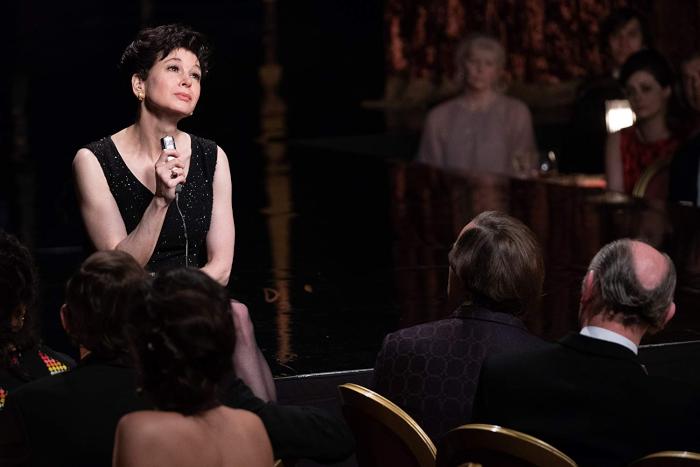 ‘Judy’ and the Enduring Tragedy of Judy Garland

There’s a moment in Andrew Lloyd Webber’s autobiography Unmasked where he describes going to see one of the last-ever concerts given by Judy Garland. In 1969, Garland was performing a residency at the Talk of the Town nightclub in London, only a few months before her tragic death. Lloyd Webber coldly notes that the more accurate term would have been ‘non-perform’, as Garland ‘was an hour late on stage and the dinner-theatre crowd, fuelled by the cheap house champagne’ ended up throwing coins on stage as she tried to stumble her way through ‘The Trolley Song.’ Then she tried to sing her signature song ‘Over the Rainbow’ as ‘the booing and whistling grew louder and louder’. He describes Garland that night as ‘a frail little sparrow crushed in an iron fist,’ a woman being devoured ‘like a vulture on a battlefield’ by the anthem that made her an icon.

I thought about those words a lot when I eventually saw Judy, the Renee Zellweger starring biopic that was released last month to a bevy of Oscar buzz. The film covers the last months of her life during that Talk of the Town residency, showing her at her lowest ebb as she tried to scrape together enough gigs to pay off her debts and fund a home for her youngest children. The film makes brief flashbacks to Garland’s past, as she was working on The Wizard of Oz and doing endless promotional work for her studio, MGM.

Everything about Judy is painfully conventional in the way biopics often cannot help but be. As I mentioned in my review from TIFF, you can practically predict every narrative step it’s going to make and set your watch to its ‘twists’. Of course, this is a film that mostly exists to be the foundations of a great performance, so in that aspect, it’s a job well done. Zellweger gets plenty of big awards-season friendly scenes to show off her range, including a lovely singing voice and reminds the audience of just how criminally underappreciated she’s become after many years at the top. It’s not hard to see why she would be so drawn to Judy Garland’s story, especially this period in her short life that is typically overlooked when her life is retold. This formula, however, means that there’s no way the fullness of Garland’s own life can be conveyed in a mere two hours. No biopic can pull that off any plenty of movies have sunk into flop status trying to cover several decades in one linear narrative. Judy is smart enough to focus on one point in her life, with glimpses of her origin, which is at least a more cohesive way to get the job done. In theory, I respect it, but in practice, it feels like a disservice to a woman who’s been screwed over enough by history as it is.

In many ways, Judy loves Garland too much to show just how bad things got towards the end. Zellweger captures so many of Garland’s mannerisms, as well as the sense of humor that kept her head above ground during tough times, but the movie avoids depicting the real depths of that darkness. We see brief glimpses of those bad performances but moments of the nightclub workers trying to get her stumbling form into a dress and on stage are often scored to peppy music as if these are moments to laugh with. I appreciate the filmmakers not wanting to sink into the sort of lurid voyeurism that often mires the biopic genre, but there’s a sheen to this version of events that takes away from the seriousness of Garland’s plight.

Still, Zellweger seems to wholly understand that crushed baby sparrow quality that made Garland so easy to root for, even as she blew one opportunity after another until she was considered the biggest of liabilities. She still seems a tad too glamorous for how Garland looked at that point in her life, but the film does put emphasis on the fact that Garland, after a lifetime of body shaming, forced diets, and pill abuse, most likely had an eating disorder. It is this detail, as well as her oft-undiscussed insomnia, that gives a deeper portrait of Garland’s many demons and how little help she received for such problems. Garland was such a monumental talent and a figure of endless charisma that you couldn’t help but plead for her to succeed. Just get through this residency, this week, this one concert, and things will get better, surely.

By showing Garland’s early days at MGM, working on the movie that would come to define her for decades to come, the film hopes to show that Garland was set up from youth to not only be a star but to shoulder the agony that accompanies such pressure. MGM head Louis B. Mayer takes a special interest in her talents but emotionally manipulates and abuses her at every turn. She must sell the public the idea that she is the newest Cinderella story, documented by the press as her every move is monitored by the studio. After 18-hour workdays, fuelled by amphetamines, sleeping pills are shoved at her. We see the creation of Judy — albeit spelled out in painfully conventional ways — but we don’t see her as that star who dominated Hollywood for a decade. All we get are the beginning and the end, and the former doesn’t help lift the latter enough to fully convey what it meant to be Judy Garland. The fall hurt but the narrative cushions that blow through a lack of narrative detail.

It took a lot for Frances Ethel Gumm to become Judy Garland, and it took even more for Judy Garland to become an icon. To experience that properly, you have to return to the movies. Go listen to her sing ‘Have Yourself a Merry Little Christmas’ in Meet Me in St. Louis, a moment of such agonizing emotion that I cannot help but cry every single time. Look at her in those black nylons and that tuxedo jacket as she puts on a show of ceaseless charm to ‘Get Happy’ in Summer Stock. Be astounded by ‘The Man That Got Away’ or her gut-wrenching monologue in A Star Is Born where she confesses to often feeling resentment towards her alcoholic husband. Of course, those moments of impeccable beauty and craft are accompanied by the ultimate cost to Garland herself. Summer Stock took six months to complete because Garland often showed up late or not at all, and you can see how drastically she lost weight between scenes. She was especially unstable during production of A Star is Born, a movie produced by her third husband, a man she would later accuse of hitting her (in Judy, Sid Luft is portrayed as the stern but more stable of the two when it comes to the Luft kids).

Of course, depicting everything that made Garland’s life so tragic and the stuff of Hollywood lore would risk the filmmakers falling into ghoulish or exploitative territory. I’m thankful Judy didn’t decide to include endless scenes of her tiny ravaged body being dragged through hotel rooms by beleaguered staff or show her at every concert being pelted by coins. I think this is the main reason we haven’t seen a deluge of Garland biopics, despite her fame and the naturally dramatic nature of her life story. Judy wants Garland to end life on a high, and it gives her a tiny moment of triumph that she never received in reality. The crowd returns to her and they support her even as she crumbles under the pressure. They want to uplift her as much as we continue to five decades on from her death. She always remained an underdog, no matter how famous she got. Judy captures the pleasantness of this idea but not the potency of the truth. Then again, maybe we never really wanted the truth of Judy Garland. It just hurt too much.

← Women's Clothes Are The Devil: Third Time's The Charm: Just Bras | Review: Edward Norton Spent 20 Years Making 'Motherless Brooklyn' And THIS Is What We Get? →