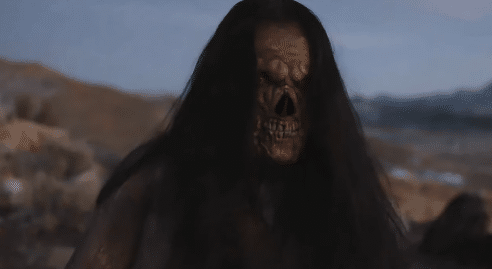 Watch the Trailer for 'Nameless Days,' a Horror Movie Apparently Written by a MAGA Hat

I love a good monster movie. But this is … not that.

From to IMDB.com: On the border between the United States and Mexico, once every 20 years, there are days that locals call timelessness. At this time the gods, to whom the ancient Mayan tribes made sacrifices, descend to Earth to take human souls.

What really seems to be going on here is that there’s a monster at the border who will kill you and steal your baby if you dare try to cross over into America. And the border agents are the good guys.
What kind of propaganda machine are you running over there, Vertical Entertainment? The IMDb.com page says it will be released on April 14th in Russia. Sure, that tracks. I bet they’ll also be screening this at the next Turning Point USA conference and CPAC.

Nameless Days stars a bunch of people I’ve never heard of and was written and directed by a couple of guys I’ve also never heard of. All of them should really rethink this whole thing.