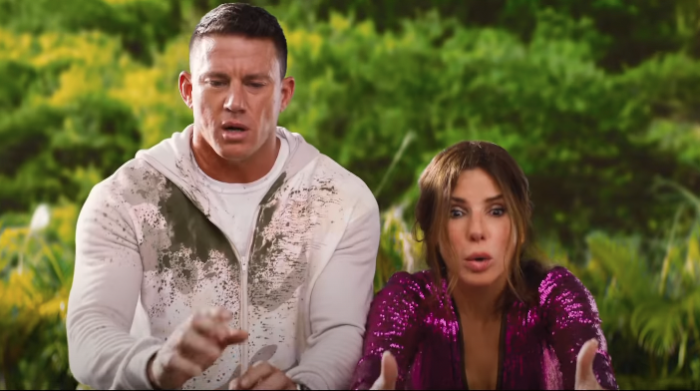 Trailer Watch: We Didn't See That Cameo Coming In 'The Lost City'

You know what the 21st century needs? A shiny new Romancing The Stone Action/Adventure/Comedy/Romance movie. Oh look, here’s one!

Sandra Bullock is romance novelist Loretta Sage, who writes about adventure but is content to sip chardonnay in her lux bathtub. She’s kidnapped by an eccentric billionaire, played by Daniel Radcliffe, who wants her to help him find the real Lost City that she’s written about in her novels. Enter Channing Tatum as the beautiful himbo cover model determined to save her, armed with nothing but his good looks and a rental car full of snacks. Zany jungle adventure ensues. And then there’s some other guy who shows up at the end there.

Previously titled The Lost City of D, and I’m glad someone gave that one a second thought, the film was written by Oren Uziel (22 Jump Street, Mortal Kombat 2021) Dana Fox (Cruella) and Adam Nee, who also directs with his brother, Aaron. It will be in theaters starting March 25th, 2022.

And here’s the Twitter promo because the intro is great:

← Jeff Garlin Has Permanently 'Left' 'The Goldbergs' Because Everyone Wanted Him to Leave | Trailer: 'Aline' is a Celine Dion Biopic That's Technically Not About Celine Dion →