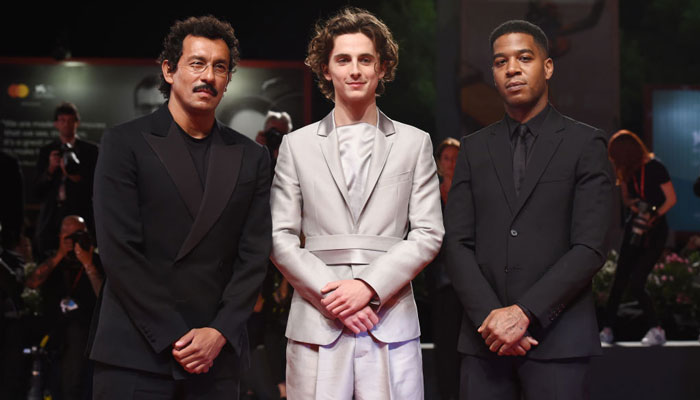 Timothée Chalamet is driving Twitter wild as he traipses through the Venice Film Festival being chic and cheerful. The Oscar-nominated actor is in attendance for the world premiere of Netflix’s The King, in which he stars as King Henry V of England (A.K.A. Hal). He’s been an absolute delight, engaging with fans and strutting out in fierce and fancy fashion that has Twitter atwitter.

A bit of background behind the look: This stunningly tailored suit is designed by Haider Ackermann, who not only regularly dresses the dashing ingedude but also appeared on the Venice red carpet alongside him. (Pictured above in the header, Ackermann is on the left. Chalamet’s friend—and fan—Kid Cudi is on the right.)

Timothée’s suit at the premiere for The King is by Haider Ackermann, whose designs he has worn before and often—including for the 2018 Oscars when he was nominated for Best Actor for his performance in Call Me By Your Name pic.twitter.com/aOd3Ij3xYS

And while the reviews for The King are mixed, Chalamet and this suit got a slew of raves.

This is right after Timothée Chalamet tossed his phone into the fountain and quit working for Miranda Priestly. pic.twitter.com/kr8oEQDvPU

How Timothee Chalamet manages to be a quintessential 2019 heartthrob AND a 19th century women's horse racing superstar, I don't know. pic.twitter.com/FCjSHjBl0h

does tilda know timothée has Bling Ringed her closet https://t.co/I8lWhq4LMn

i don’t have “gender dysphoria.” i have a much more specific condition, aka “why don’t i look like timothée chalament” disease https://t.co/L7RjWTc3PX

timothée chalamet knows this is HIS world and we’re just living in it pic.twitter.com/ee5h9Q9JYE

And boy, does he know how to play to his crowd.

Timothée Chalamet was asked how he felt being at the Venice Film Festival and he responded “I feel like Lady Gaga on the boat” pic.twitter.com/stIEEwk1Ox

Aside from this perfect soundbite, Chalamet also got close to the crowds who came to clamor over him. On Twitter, there are plenty of shots of excited fans getting pictures, autographs, and hugs from the star. But the most astounding interaction was with a fan who showed Chalamet her Call Me By Your Name tattoo and received a kiss right on it!

did I cry over timothée chalamet kissing a fan’s tattoo today? yes, yes I did pic.twitter.com/Fg9r0JgIZn

Nothing satiates me like a man actually trying on a red carpet, thank you world for this offering now pls Timothée send the memo to your comrades pic.twitter.com/MRGmACuymo