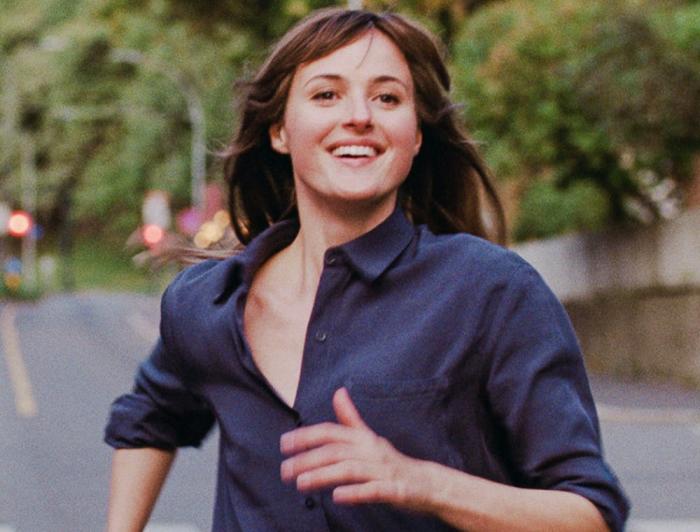 From the very beginning, The Worst Person in the World knows what it wants to be; with twelve chapters, a prologue, and an epilogue, Joachim Trier is setting out to explore coming of age in a way that’s explicitly novelistic. The film’s chapter-driven structure takes the narrative thrust of coming of age films — that a chapter in someone’s life is ending and another is beginning — and brings it crashing together with the structure of a novel. The formal choices in Worst Person also lean into the relationship between novel and film that Trier at once embraces and challenges, thanks to a heavy dose of narration from Julie (a revelatory Renate Reinsve) that feels like the prosaic voice of a novel. But what Trier does with his novelistic form and narrative digressions is set out to craft something that could only ever exist as a film. While it might be tempting to look at Worst Person and think of it as a kind of Nordic answer to Sally Rooney, the more the film goes on, the more it evolves into something both singular and cinematic.

The prologue sees Julie changing potential career paths and romantic partners at breakneck speed, and while there are moments where the film embraces this kind of rapid, chaotic uncertainty, it refuses to show coming-of-age as something that’s simply a mess of mistakes. The moments where it slows down capture what’s both most beautiful, and tragic, about the act of growing up: the road(s) not taken. Every change that Julie makes, from the prologue on, essentially means discarding a version of herself and trying to (re)create a new one, whether it’s bailing on surgery at med school to study psychology instead because the interior, rather than the exterior, is what interests her, or the tension drawing her away from one boyfriend and towards another, Worst Person allows Julie — and everyone around her — to exist in multitudes, as people still trying to work out who they are and what they want, as opposed to simply becoming set in stone by the time they hit 30. In Worst Person, the world itself is constantly changing — there are references to the #MeToo movement, heated debates about “cancel culture,” and anxiety around climate change — and the characters are changing, or at least trying to, with it. When comic book artist Aksel (Trier mainstay Anders Danielsen Lie, brooding and combative but hilarious throughout) is accused of sexism in his art, the defence he attempts to mount for it feels like a painfully familiar echo of so many cultural debates on both the airwaves and the internet; this is the man who spends an impassioned monologue complaining about the fact that his politically incorrect Bobcat has become the face of a family-friendly Christmas film, and even compares his work to depictions of Muhammad. Aksel insists that everyone becoming unnecessarily offended by Bobcat is “generational” — he’s over a decade older than Julie — and the generational tension here instead seems to be about those who are able to change, and those who aren’t. Worst Person is all about this kind of change, both the possibility that it offers, and the sadness that comes from leaving something, or someone, behind.

One of the most breathtaking moments in the film is driven by this desire for change. As her relationship with Aksel begins to decline, Julie imagines herself dating, and falling in love with Eivind (Herbert Nordrum, a charmingly grounded foil to both the shapeshifting Julie, and his ex-girlfriend who becomes overwhelmed with anxiety for the climate after discovering she’s 3.1% Sami). In this sequence, everything in the world stands completely still apart from Julie and Elvind. She darts out of her shared apartment with Aksel, meets Elvind, kisses him, and they fall wildly in love — its swooningly romantic and breathtakingly cinematic. Watching Julie run through otherwise static streets, smile growing broader the faster her own pace becomes, it shows that the world really is her oyster. What might feel like a cliche of the genre becomes something unexpected, written in a language that’s novelistic and cinematic all at once. But even this sequence, defined by movement, has moments of stillness. When Julie and Elvind kiss in the park, their own movement slows down, they get lost in each other as the camera zooms out. The world of Worst Person is sometimes overwhelmingly vast, but the intimate focus on Julie and her inner life reveals beauty in both the possibility of upheaval and also the stillness that comes with making peace with not only all we can do but what we can’t. The imagery of stillness has a mournful coda in one of the film’s final chapters, but one that exists alongside the possibility that comes from a new dawn, watched with slow reverence by Julie.

It’s these moments of visual ingenuity that capture the thematic depth of Worst Person, a film that — like a lot of romantic, or coming-of-age films — is relatively light when it comes to narrative incident. When Julie and Elvind take mushrooms together, Worst Person reinvents itself yet again, taking a strange, psychedelic trip through Julie’s inner life that’s filled with bizarre imagery and moments of strange beauty. It allows the film to dive into its themes in ways that are both abstract and explicit all at once — it’s these kind of tensions between what seem like contradictions that animate Worst Person the most — posing more questions than it’s willing to answer about Julie’s relationship with Elvind; how she relates to her father; whether or not she wants to be a mother. Films that pose more questions than answers can often feel frustrating, but Worst Person finds joy in unanswered questions; it’s easy to say that coming of age films are about the journey rather than the destination, and there’s truth in that. But what makes Worst Person so striking - and ultimately so moving — is the fact that it’s about more than one destination and more than one journey.

The epilogue sees Julie returning to one of the versions of herself that she initially tried out during the prologue, but this doesn’t mean that her journey — or the journey of those around her — is over. She sees a former boyfriend through a window; he has a new girlfriend and a baby. This scene doesn’t offer any final answers about Julie’s relationship to the possibility of parenthood, but instead, it silently asks questions — about why the two of them didn’t have a child together, or if Julie wants a child now — understanding that, even as the credits roll, and another chapter of Julie’s life is coming to a close, the world remains vast and full of possibility. The professional stability she feels, coupled with that personal nostalgia, feels like Worst Person in miniature: all the beauty of what’s to come, and the ghostly hand of the past, serving as a reminder of what was, and what might have been.