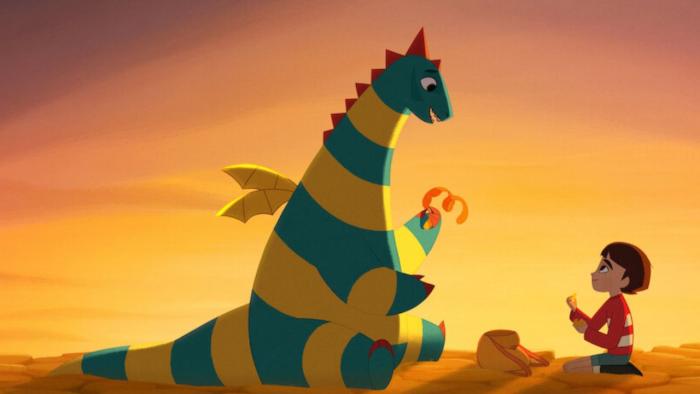 A young boy named Elmer has simple dreams to live a comfortable life with his mother in the small-town shop she runs. When a recession leads to the store’s closure, Elmer is forced to move to a big city, appropriately named Nevergreen. As his hopes of restarting his old life fade, he runs away and encounters a talking cat (as you do) who claims to have the answer to all of his problems. If Elmer can go to the mythical Wild Island and free the dragon who is being forced to keep the entire place afloat, then perhaps he can fix everything for his mom.

It’s oft been lamented that mainstream cinematic animation has been in a rut for the past decade or so. Sure, we’ve had more than our fair share of greatness, from Coco and Turning Red to Luca and Encanto, but it’s also undeniable that 3D has dominated the scene in ways that aren’t always positive. Traditional hand-drawn animation has all but been killed off on the big screen in Hollywood, even as the anime boom brings in millions at the box office. Stop-motion continues to wow audiences, in large part thanks to studios like Laika, but receives a sliver of the commercial attention of its computer-generated counterparts. Welcome exceptions to this, such as Wendell and Wild and Wolfwalkers, don’t seem to be real priorities for the streaming services that acquired them. Fighting for a modicum of attention in a medium still seen by far too many as a frivolity intended only for kids’ entertainment remains tough.

The newest addition to the table, in a year of real excellence in animation, comes to us courtesy of Ireland’s Cartoon Saloon, one of the most striking and downright beautiful voices in modern 2D animation. Based in Kilkenny, Cartoon Saloon has made a name for itself thanks to lush, picture book-esque tales rooted in myth and Celtic lore. Films like The Secret of Kells, Song of the Sea, and Wolfwalkers (each of them Oscar nominees) stand out among a saturated field thanks to their astonishing visuals, universally appealing themes, and commitment to Irishness. Now, they’re making films for Netflix, and My Father’s Dragon has taken them to America, with an all-star cast and perhaps their biggest potential audience ever.

Based on a series of children’s novels, My Father’s Dragon may have a new set of accents but this is still classic stuff for Cartoon Saloon. The stylistic flatness that the studio does so well feels perfect for a story taken from what must have been a favorite bedtime tale to many a child over the decades. Elmer’s journey is given a stunning color palate, from the wistful dream-like tint of his idyllic childhood to the dourness of the ever-rainy big city to the lush mismatches of nature on Wild Island. The design of the dragon, voiced by Gaten Matarazzo of Stranger Things fame, is like that of a child’s imaginary friend. While our dragon is a touch goofy, don’t expect Genie-esque shenanigans. This is altogether a more melancholy tale than such wisecracking could convey.

It does speak to Cartoon Saloon’s impeccably high standards that this, while still being a delight, isn’t even top tier stuff for them. Then again, the bar is extremely high thanks to genuine masterpieces like The Secret of Kells, which felt like a much-needed breath of fresh air when it premiered. That film reveled in the details, those minute moments of dazzling visuals that evoked the Book of Kells from which the narrative took inspiration. Things are simpler here, perhaps even a touch derivative, if not in aesthetics then at least in terms of the story. You know exactly how this is going to unfold from the moment Elmer ends up on Wild Island. That’s not a bad thing, necessarily, especially when the lessons to be learned are sturdy and welcome for its younger-than-usual target audience. Elmer needs to learn that he can’t control every little problem in his life, while Boris, the young dragon forced to save the island over and over again, needs to let go of his fears. If Wolfwalkers felt primed for kids on the cusp of adolescence, My Father’s Dragon is ideal for their siblings just starting school. Not that there isn’t much here for the entire family to enjoy, as is expected from Cartoon Saloon, of course. When it looks this dang good, it’s for everyone.

Netflix have had an excellent year for animated films, from The Sea Beast to Wendell and Wild and the upcoming Pinocchio, which has earned director Guillermo del Toro some of the best reviews of his career. This seems like an ideal way for the streaming service to offer something to the entertainment industry that Hollywood seems unconcerned with fulfilling. And yet My Father’s Dragon was dropped on the platform with barely a ‘hello.’ Their release strategy continues to baffle me. Maybe if Ryan Murphy made an animated project, Netflix would care to promote it (also please, Ryan Murphy, never ever get into animation, for the good of mankind.) For those who care to look for it, My Father’s Dragon is sweet and entertaining. It may not be one of Cartoon Saloon’s best but even their lower-tier efforts are still a delight.


My Father’s Dragon is available to watch now on Netflix.


← Reddit Asks: 'What's the Absolute Best Smell in the World to You?' | If You Want to Save the World, Choose Your Targets Wisely →