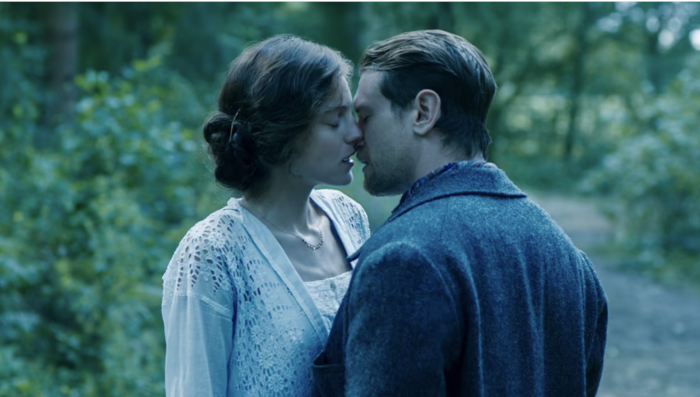 No matter how much polish and finery is on display in Laure de Clermont-Tonnerre’s adaptation of Lady Chatterley’s Lover, it’s not enough to disguise the film’s most significant fault. In a story about a torrid affair, we want to root for the unfaithful couple because it means getting to see what happens when their chemistry combusts. Unfortunately, the Netflix adaptation is a tepid and terse reimagining of a novel that’s all but.

Based on the novel by D.H. Lawrence, Lady Chatterley’s Lover follows Connie (Emma Corrin), an aristocrat who — following her husband’s war injury and their subsequent move to his family’s estate — begins to fall out of love. While feeling cooped up, she begins an affair with the gamekeeper, Oliver (Jack O’Connell), as she begins to uncover and challenge her own internal biases. A story about the pursuit of ecstasy in another’s arms and the shared passion that comes in the embrace of someone who sees you fully, Clemont-Tonnerre’s adaptation needed to push itself further to express the dizzying emotions of the lead characters.

It doesn’t help that “Lady Chatterley” is two hours long and feels approximately 200.

There are plenty of strong ideas from the source material to wade through, though none capture just how revolutionary this novel was for the time period. From the casual elitism and cruelty of Connie’s husband, Clifford (Matthew Duckett) — who arranged for Connie to have sex with another man to become pregnant as simply as he would have arranged a dentist appointment — to the rebellious women who were looking for self-expression, there are hints of the story that would become a classic.

There’s much to commend about the film as a whole, especially how beautiful it looks thanks to cinematographer Benoît Delhomme’s lush fields and designs. It’s a shame the script squanders the atmosphere. The waste of the two leads is also disappointing. O’Connell was once on the cusp of being the “next big thing.” From captivating turns in independent projects such as Starred Up and ‘71 to bigger, blockbuster pictures directed by Angelina Jolie and Jodie Foster, O’Connell possesses an enviable range. Corrin, meanwhile, is following their stint on The Crown with this and My Policeman, both noteworthy performances for the up-and-coming performer. They possess immediate onscreen charisma but to see two charismatic actors rendered so charmless is frustrating.

Following countless picturesque walks through the countryside, longing stares, and frames where Corrin’s Connie lays about the manor looking longingly at the outdoors, the film ends as muddled as it began, taking a rich story and dulling the edges until it’s nothing but a pretty picture. There are pockets of light thanks to the stars and artists behind the scenes who allow the original story and its elevation of women’s sexuality shine through. Still, those moments are few and far between. Everything else is too dull to make us care. Unfortunately, it relies on the basic story beats of period pieces when it should’ve been breaking the rulebook.