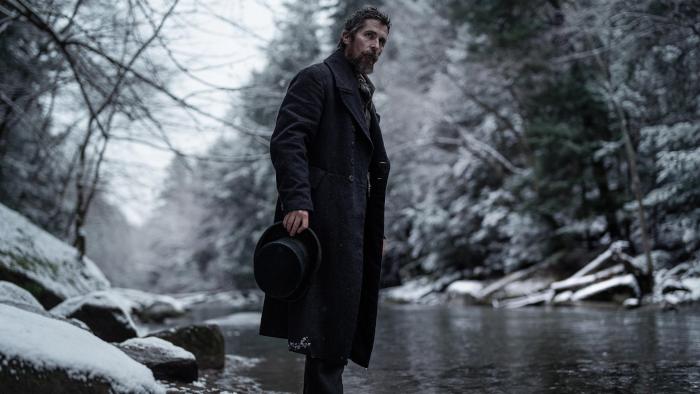 Suitably spooky and sternly gothic, The Pale Blue Eye is a whodunnit so diametrically opposed to Netflix’s other recent top-10 whodunnit release, The Glass Onion, that it feels almost like a personality test which one to click. (And I say, why not both.) The Pale Blue Eye is a calculated, understated detective story that offers a stacked cast and some ambitious performances—as well as a twist that carries the kind of emotional fallout gotcha endings don’t usually inspire in me.

Painterly lighting and precise cinematography frame the story of a mysterious death and postmortem mutilation at the United States Military Academy (AKA West Point) one frigid winter in the 1830s. A cadet appears to have died by hanging in the dark of the night—and subsequently had his heart carved out of his chest only a short time later.

The Academy brings in Augustus Landor (Christian Bale, in gruff backwoods disarray), a New York constable with an impressive reputation for crime solving as well as drinking, who arrives with gruff, truth-to-power gaucheness and a Holmesian disregard for social norms, much to the chagrin of Academy leadership: Superintendent Thayer (Timothy Spall), Captain Hitchcock (Simon McBurney), and the Academy’s Dr. Daniel Marquis (Toby Jones).

Landor finds his Watson in a young, effusive cadet by the name of Edgar Allan Poe (played with remarkable panache by Harry Melling, otherwise known as Dudley Dursley). Melling’s Poe is an adorable, pointedly out-of-place delight, and his relationship with Landor is very Geralt-and-Jaskier energy: the gruff expert and his endearing, slightly ridiculous artist buddy. And boy does that trope work. Melling hurtles past the obstacle of playing a historical figure surrounded by fictious circumstances and remains compelling and convincing, as he investigates his fellow cadets, including Artemus Marquis (Harry Lawtey) and Randolph Ballinger (Fred Hechinger)…as well as falling head-over-heels for Artemus’s sister Lea (Lucy Boynton).

Another standout is Gillian Anderson as the disconcerting Mrs. Julia Marquis, wife, mother, and all-around loose cannon. What a delight it is to see Anderson having such an obviously good time with a role, with little nuances of mannerisms (tucking in her chin, stiffening her lips) making a tremendous impression of a woman teetering on the edge. Julia Marquis is like throwing Anderson’s Lady Deadlock (Bleak House) and her Blanche (from her run on Streetcar Named Desire) together, instilling her with a predilection for all things dark and spooky, and letting her run free.

The mystery progresses in the snowy quiet of the Hudson Valley, the body count rises, and clues fall rather simplistically into place with the kind of immediacy and clarity that only fictional crime can muster, which flies in the face of the film’s attempts at engrossing realism. That said, the hyperbole and tropes of the detective story are alive and well in its execution. While an inventive script slackens into moments of clashing triteness at times, the performances carry a solid, engrossing murder-mystery story supported by arresting visuals.

Bale plays the aloof, tortured soul giving out begrudging smiles, a naturalistic performance that is quietly endearing alongside his protege’s boundless, romanticized fervor. As the outsider detective who acts as a frame for the unfolding mystery, Bale makes an apparently effortless job of exerting his character’s presence while showcasing the constellation of striking characters caught in his web of suspicion. When the twist falls, the minimalism and intensity of Bale’s performance opposite Melling is incredibly compelling.

Admittedly, this plodding “thriller” will no doubt fall flat for quite a few viewers: it takes its sweet time in doling out the plot, and besides brief bursts of violence, it’s a dialogue-heavy movie. But the patient, dark understatement of the whole adventure worked for me and felt in concert with the quiet and shadowed world it portrays.

The Pale Blue Eye is a bit of a surprise—a January release with enough real quality behind it to make that release date awkward. It will probably be swept away from any actual consideration, which is a bit of a shame for how hard Melling and Anderson went on their roles. But c’est la vie. At least we get to enjoy a little spooky murder and mayhem, as a treat.