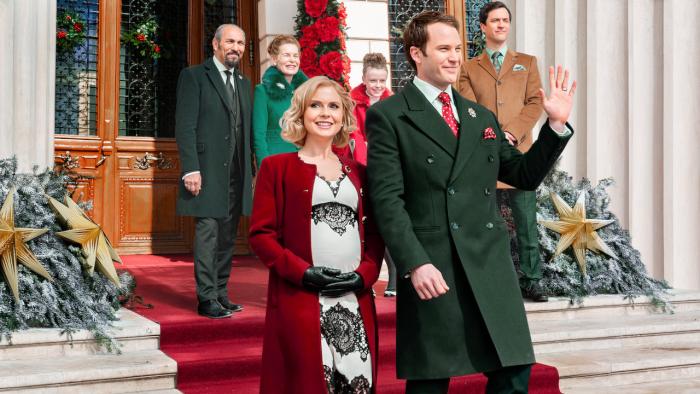 The Most Ridiculous Plots and Moments from 'A Christmas Prince: The Royal Baby'

As one of Netflix’s first holiday films to really become popular, A Christmas Prince, starring Rose McIver and Ben Lamb, helped the streaming service cash in on the holiday cheer (it’s been doubling its output since). A Christmas Prince had the great honor of getting not one, but two sequels. The third one in this dry and demure trilogy, called A Christmas Prince: The Royal Baby, sees the Aldovian monarchy preparing for the arrival of Queen Amber and King Richard’s first child.

The Royal Baby, scraping at the bottom of the barrel for a plot that’s more interesting than watching Amber and Richard interact, brings in a few new characters in a badly-attempted combination of baby story/whodunit/Christmas movie. You see, 600 years ago this cheery fictional country of Aldovia was in a seemingly never-ending battle with the neighboring Penglia. That changed when the two leaders called a truce and signed a treaty, so it became a tradition to reinstate the truce every hundred years.

Enter Penglia’s King Tai and Queen Ming, who have arrived to sign the treaty, though they must do it by midnight or risk their countries going back to a state of war. Insert eyeroll. To waste some time before the baby’s birth, the treaty disappears and then a snow storm hits that strands Tai and Ming and then Amber starts pointing fingers… but I’m getting ahead of myself here.

In short, The Royal Baby is so embarrassing and poorly-plotted that you either have to watch the movie hungover, or risk rolling your eyes back far enough to give you a migraine. Neither is preferable. Naturally, the only outcome is to list all the most ridiculous plots and moments from this movie, primarily to make my choice to watch it a bit more tolerable and, because after several days, I can’t stop shaking my head at all the nonsense. 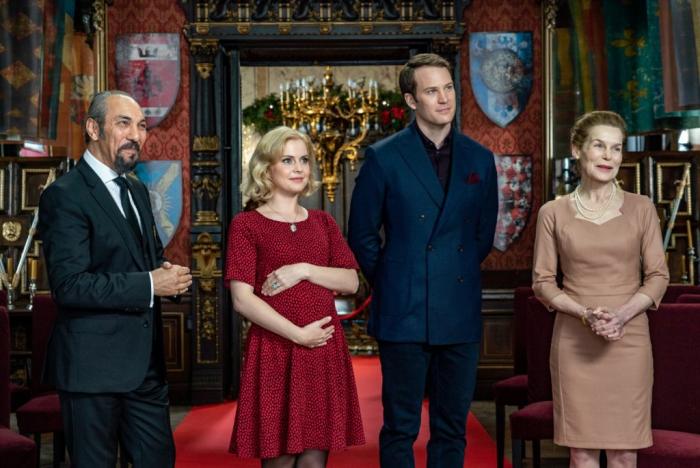 Not Signing the Treaty Risks War
The fact that the treaty has to be signed every hundred years is… well, it’s pretty dumb. In addition to that, the treaty itself is never updated to modern times, it’s just signed, which is why it’s garbage that it would roll back the peace terms between the two nations. Maybe draft a new one with new terms and conditions? If the nations have been allies for 600 years, is signing the treaty at 12:01 am going to make a difference? Also, the parchment is over 600 years old and should probably be in a museum or held in a safe place so the damn thing doesn’t fall apart. It’s a f*cking SCROLL. Do better Aldovia.

Also, There’s a Curse
On top of all the treaty whodunit nonsense, the stipulation is that if it’s not signed by midnight, Amber and Richard’s first-born child will be cursed. For life. Maleficent would be proud. Both Princess Emily and Amber freak out over this for no reason. Oh, did I mention the ghost? Apparently one of the ancestral spirits haunts the dungeons because some member of a third family vowed vengeance on both the Penglians and Aldovian monarchies 600 years ago. Why? It involved a love triangle. The ghost was fake, but it was another stupid plot point the film didn’t need.

Amber is an Investigative Journalist, Dammit!
She isn’t. Not at all. But The Royal Baby wants to convince its viewers that Amber is still doing her job when she’s really just writing posts updating her readers on her personal life in Aldovia. Pretty sure that’s not investigative journalism. What’s worse is that she keeps saying she is because she wants to solve the whodunit. And she does, but there’s not one moment in the film where she actually investigates. Yet, Amber somehow ends up with all the answers because she read a history book before the treaty was even stolen. Oh, sure, she looks through Sahil’s room, but the fact that she believes he stole it with no evidence and he’s a man of color… well, Amber was leaning into those stereotypes and it wasn’t a good look. The man’s a decorator for crying out loud, Amber! WTF does he want with a treaty? A keepsake?

Simon and Lynn Make Fiscal Decisions…
Inside a bedroom. No wonder Melissa thought Simon was cheating on her. Also, why are Simon and Lynn, who shared a romantic history, discussing their countries’ financial welfare alone? Were they going to solve the debt problem atop silk sheets? I don’t know about you, but working out a country’s debt shouldn’t be a surprise. Turns out Simon was buying a ring from his ex to give his new girlfriend. The worst. 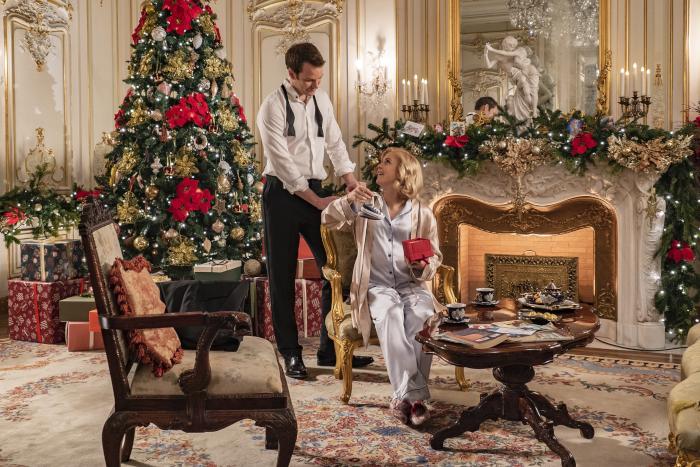 The Royal Baby?
Seriously, poor kid. The film wants to remind the audience the baby IS actually on the way, but it’s always at the most inopportune time. It’s called The Royal Baby but it should’ve been changed to The Royal Treaty. Amber’s due in a couple of weeks, but they decide to throw the baby shower in the midst of all the treaty nonsense. Naturally, Amber ends up giving birth right at midnight, go figure. Didn’t see that one coming at all. And she does it in silk robes and her doctor is rescued by horse after she crashes her car.

Chemistry? Who Needs That?
Probably the most ridiculous thing about this film continues to be that Amber and Richard have no chemistry. Zip, zilch, zero. Their romance is disturbingly unbelievable, but here we are. It’s like the writers knew that, so they kept them apart for most of the second film, A Christmas Prince: The Royal Wedding. Not sure what happened here, but Amber and Richard not only spend a lot of time together in The Royal Baby, but they also share several quick and emotionless pecks. It was cringe-worthy to watch, almost like they were rubbing it in our faces. SEE, we have chemistry, right??? Man, they’re such a boring couple. They have so little chemistry that I’m convinced Richard isn’t even the father.

If you can take sitting through an hour and a half of the pain I just described, A Christmas Prince: The Royal Baby is available to watch on Netflix.

← The Fiercely Feminist 'Mad Max: Fury Road' is the Best Film of the Decade | 'Home For Christmas' Spoilers: Who Was At The Door? Will There Be A Season Two? →