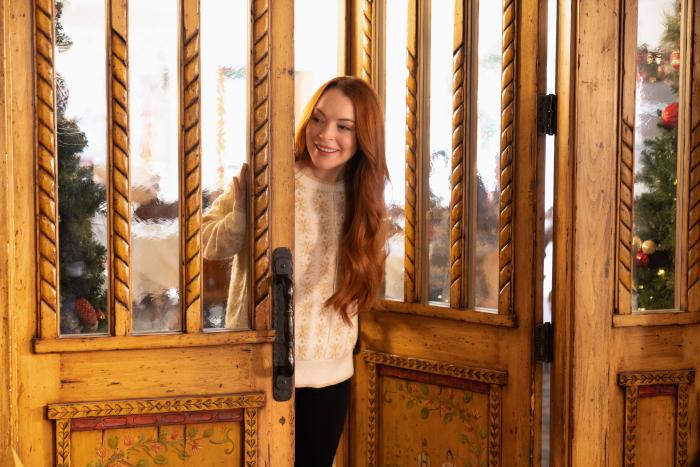 The Lohanaissance Is Here With ‘Falling for Christmas'

Like Mariah Carey after Halloween, Lindsay Lohan’s career has finally thawed after a long deep freeze. Her projects haven’t had much fanfare since 2012’s Liz & Dick, but Netflix’s Falling for Christmas, producer Janeen Damian’s directing debut, marks Lohan’s return to romantic comedy and is a merry and bright start to the Lohanaissance.

The film follows Sierra (Lohan), a hotel heiress with a designer wardrobe to match. Her father, Beauregard Belmont (Jack Wagner), owns a luxury ski resort with the hope that his daughter will work in the hotel business with him. We quickly learn, however, that she doesn’t want to be solely known as the spoiled daughter of a hotel magnate. She wants to make her own mark, but it isn’t easy with this expectation hanging over her head. It also doesn’t help that her influencer boyfriend Tad (George Young) is just another man in her life who doesn’t take her feelings into account.

Enter Jake (Chord Overstreet), a widowed father who owns the North Star Lodge. It’s more like a cozy bed and breakfast than an upper-class ski destination. He can barely afford to keep it running because he’s competing with Airbnbs and resorts like Sierra’s father’s that offer room service and rooftop hot springs. After such a slow season, he needs a miracle. That miracle comes thanks to Sierra getting knocked out in a skiing accident. She wakes up in a hospital room with Jake at her bedside and a case of amnesia. Taking an offer to stay at his lodge with him, his daughter Avy (Olivia Perez), and mother-in-law Alejandra (Alejandra Flores), sparks begin to fly between the pair as Sierra tries to figure out who she is. And as their relationship grows, they help each other in uplifting ways.

Falling for Christmas is the perfect movie to snuggle up to under a warm blanket on a snowy day. It’s endlessly feel-good with that Christmas cheer, sweetness, and magic. Much of the comforting feeling the film exudes comes from Lohan’s performance. We are reminded of her magnetism, her warmth, her natural skill at both comedy and drama, and her singing talents. Just like we recall every year why we love Christmas so much, the film emphasizes why Lohan is so enjoyable to watch onscreen. Of course, this isn’t only her show. Overstreet of Glee fame is charming as Jake. He gets many emotional moments to shine, and the touching scenes he shares with Perez add to the film’s heartwarming spirit.

Meeting through the classic bump and “Oh! I didn’t see you there,” Falling for Christmas has many Hallmark movie tropes, but it also stresses why these kinds of films are so popular during the season. This is explained through the comparison of Jake’s traditional lodge versus resorts that feel commercialized. The latter lacks that old Christmas magic; chestnuts roasting by an open fire and the jingle of sleigh bells. We want that magic, and while these films are all very similar, they never fail to capture the traditional things we love about Christmas. As Sierra’s memory comes back, it’s in significant ways. Mainly, memories of what’s important this time of year: love, family, and togetherness. Jake also shows her that there’s something special about simple things like hot chocolate and marshmallows. We take joy every year in the familiar and in tradition. We take joy in hearing the same carols over and over. The holiday itself is the same old formula, just like the films that come from it. We never tire of Christmas’s familiarity and it’s why, when done successfully, films like Falling for Christmas remind its audience of why we fall in love with Christmas over and over again.