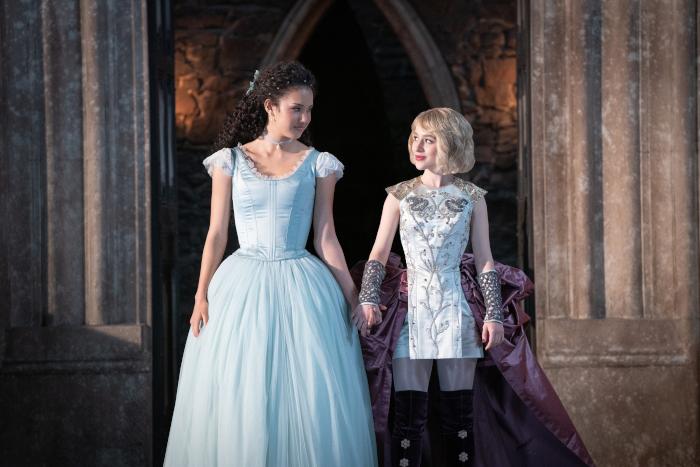 Paul Feig is back in the director’s chair, but it’s not for the Spy sequel we’ve been asking for. With The School for Good and Evil, Feig steps away from comedy and turns to fantasy. He also expands his reach by appealing to a younger audience through an adaptation based on the children’s series of the same name by Soman Chainani. However, this Netflix original is definitely not for kids. Often dark and surprisingly bloody, the film puts a different spin on fairy tales by rewriting their origins. To that end, Feig and David Magee’s script faces a conundrum. Its familiarity and predictability will either be accepted or scolded.

Whimsical notes clash with the spine-chilling sound of crows as two brothers cross swords. As the film explains, Rafal and Rhian (both played by Kit Young) created a school to keep the balance between good and evil by training heroes and villains of all fairy tales. They shared power peacefully until Rafal’s unruly ambition got the better of him. His hunger for evil to triumph over good resulted in a clash between him and his brother that saw their bond of warring souls finally shatter. Then, many years later, a story much similar would unfold that would shake the balance of good and evil once more.

Sophie (Sophia Anne Caruso) and Agatha (Sofia Wylie) are both best friends and the town freaks. They seem like an unlikely duo. Sophie is the bubbly blonde-haired princess who talks to animals, and Agatha is the brooding and standoffish witch. Agatha, of course, is not actually a witch, but she’s looked upon as one. As the strange girl who lives by the graveyard, the whole town glares at her and threatens her, but Sophie is there ready to knock out the haters. Sophie is also, of course, not really a princess, but it’s all she dreams of. Sophie wants to live the life she reads in the fairy tale novels that Agatha sees as little kid books. So, when Sophie learns of a mysterious school where the true story of every great fairy tale begins, she jumps at the possibility of attending and escaping her horrid town. She won’t settle for an ordinary life, but Agatha won’t settle for a life without Sophie. Taking charge of what she believes is her destiny no matter what that means for their friendship, Sophie answers the school’s call when the opportunity comes. Agatha tries to stop her, but they’re whisked away together.

While it seems easy to guess which of the two best friends is perfect for the school for evil and the school for good, they don’t end up where they thought they would. Out of place and clashing endlessly with their peers, who are the children of various fairy tale characters like Captain Hook and Prince Charming, they’re desperate to prove that there’s been a mistake. As their journey progresses, they discover that they may be where they belong as a malevolent force writing their destinies risks tearing their friendship apart.

Feig’s latest feels like both a modern teen movie and coming of age story in a period package, with opulent production design and ornate costuming. It’s a delectable feast for the eyes. There’s also a surprising amount of action scenes here, ranging from sword fights to magical duels (including one sequence with the soundtrack of an awesome “Toxic” by Britney Spears cover). The special effects are pretty solid, too, but definitely feel like streaming quality.

We are also treated to a cast of some of the best in the business. Cate Blanchett provides occasional narration as the documentarian of this fairy tale; Patti LuPone makes a brief appearance as a bookshop owner; Michelle Yeoh fittingly plays the good school’s professor of beauty; Laurence Fishburne plays the school headmaster. Rounding out the cast of legends are Charlize Theron and Kerry Washington as evil school deans Lady Lesso and Professor Dovey, respectively. They, like Sophie and Agatha, are yin and yang. Theron’s Lady Lesso cackles with pleasure at pain and chaos in her deliciously evil turn, which contrasts with the more lively and colorful energy of Washington’s Prof. Dovey.

The film’s characters are well crafted to keep the audience compelled to follow their journey through. It’s not an easy feat to hold an entire film on your shoulders but Caruso and Wylie do it like pros. Feig’s penchant for comedy comes out in the script buoyantly, which can be found in many scenes shared between the duo, as well as naturally on their own. Their chemistry and the relationship crafted makes the film feel both breezy and engaging. It’s easy to see that these two characters have been crafted with care and detail to contrast both their outward and inward appearance which helps the audience easily understand why they end up where they do.

The School for Good and Evil will no doubt feel familiar whether you’ve read the book series or not. There are comparisons to be made with many fantasy films, to the point where the film’s originality can be put into question. As a combination of every fairy tale story you’ve ever read or seen, it may feel tedious to some. But as a story about fairy tales’ origins, that’s the point. Sure, it features almost all the tropes, true love’s kiss for example, but it doesn’t limit a woman’s ambition to finding a prince like many fairy tales do. It takes the trope and creates a very emotional evolution for Sophie and Agatha and presents the film’s overall theme of the power and beauty of friendship. It’s also surprisingly poignant when exploring the complexities of humans and how evil and good aren’t so black and white, things that many fairy tales fail to develop.