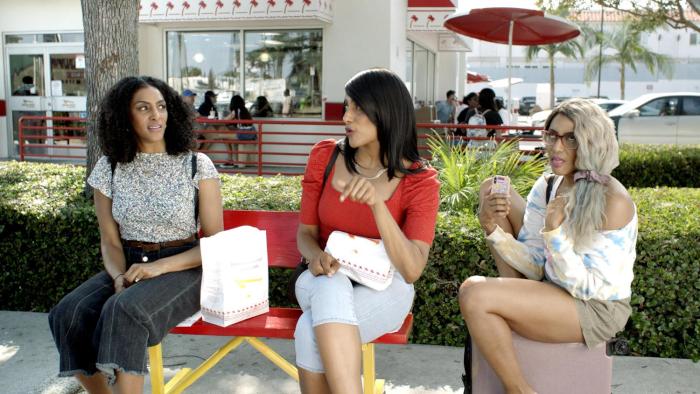 Review: The Controversial “Sell/Buy/Date” Falls Short of Being a Thoughtful Exploration of the Intersecting Worlds of Sex Work and Trafficking

Sarah Jones is a Tony-winning playwright and performer who, in 2016, returned to the New York stage with her fourth one-woman show, Sell/Buy/Date. In the play, Jones plays herself and a number of other characters talking about various aspects of the sex work industry, pornography, and sex trafficking, with the narrative gimmick that this is presented through the lens of a college course in the future. As Jones brings her play to film (kind of), that gimmick is scrapped in favor of a new gimmick: A quasi-documentary about her making a film adaptation of her show.

If that does not seem to make a ton of sense, fair enough. As Sell/Buy/Date opens, we meet Jones closing down her theatrical show, and we also meet several characters from the show. There’s Lorraine (an old Jewish grandmother), Bella (a white ultra-liberal college student), Nereida (a Dominican/Puerto Rican woman rights activist), and Rashid (a young Uber driver). Over the course of the film, Jones and these characters will meet with several of the real people who provided Jones with many of the stories and context that were incorporated into her show. The through-line of the film’s “story” is that she is talking to these people in the lead up to a big announcement of the film at a studio upfront, ostensibly to better understand the real-life controversy surrounding her project. (We’ll come back to that controversy.)

Structured as such, this film is only an adaptation of the play (as I understand the stage show, having not seen it) in the loosest of senses. The characters Jones plays likely reuse some content from the play, but it all has to be incorporated into this new storyline and, more importantly, all of the stories of others told by her characters in the play are here told by the people they belong to. Those parts of the movie, where it’s really acting as a straight documentary, are the strongest and most affecting parts of the film. Everyone’s story, whether positive or negative (or sometimes both), is deeply personal and important. When it is Jones’ characters talking, that’s where the film is in its most non-documentary narrative form, and it’s when the movie is at its weakest. There are some amusing moments, but more often than not the characters fall into one of two modes. They never have any meaningful, distinct characterizations; instead, they either espouse arguments that sound like tin-eared college debate speak, or they’re being painfully naked, stereotypical, and uncreative caricatures.

This is not to say that documentaries that blur the line like this can’t be done (go watch Bart Layton’s masterful American Animals, which proves this point better than I ever could). In this instance, some version of Buy/Sell/Date that was a more standard documentary would have been more interesting and compelling. Not only because it would excise these other, unnecessary characters and elements, but because it would also allow the film to pull some more meat off the bone. Late in the film, Jones comments how the topic of the sex industry has so many issues, and that “my hope is I get to make the [fictional] movie that speaks to all of this … it’s just too complicated to make it simple.” Yet, that’s largely what this film does, failing to address the complexities of these issues. By spending so much time with her characters (and her mother), large portions of the film that could be focused on unpacking these issues are wasted, leaving me wanting a more complicated dissection and discussion.

That said, it’s not fair to criticize a film for not being what I want, and this is seemingly exactly the film that Jones wanted to make, so credit to her for sticking with her vision. She does at least try to touch on some of these issues more than the original play, I gather, in light of the aforementioned controversy. After a film adaptation of Jones’ play was announced with Meryl Streep, Rashida Jones, and Laverne Cox attached as producers, there was some heavy criticism of Jones and her play by some in the sex work industry (and their advocates). While more nuanced, the high-level version is that Jones’ show recklessly conflated sex work and sex trafficking and that producers Streep and (Rashida) Jones have their own complicated histories that are seen as supporting anti-sex work causes and issues. Cox quickly stepped away from the production, but the film otherwise moved forward.

Within the narrative element of the movie, Jones is planning to make an adaptation of her show but, after some producers dropped out because of alluded-to controversy, she goes on this journey to ostensibly learn more and figure out if she should still make this movie (assuming the studio still wants to). It’s all exactly as muddled as it sounds, especially because she references and dances around the controversy without ever really engaging with it directly. To be fair, early in the film Jones does somewhat explore whether she is “allowed” to tell these stories, in a scene with sex workers’ rights advocate Lotus Lain. Lain notes that Jones is an outsider and that “you have to let sex workers speak for ourselves” while also saying that allies who make a mistake should be given an opportunity to learn and grow and be forgiven before being written off. She’s of course correct, but it’s also bizarre subterfuge because Jones never unpacks what mistake she’s already been accused of, and she never has any real frank conversation on the overlap and conflation of sex work/trafficking.

This does a disservice to the audience, but it is also arguably disingenuous. For example, early in the film one of Jones’ characters expresses confusion that the play ran for many months with none of these criticisms that are now coming to light. This is not only untrue but, even if it were true, shows a lack of awareness of the scale of a film versus theater, that a one-woman theater show playing in a handful of cities may not receive the same attention as a Streep-produced film. More troubling, however, is that Jones spends much of the film talking about how she wants to present “both sides” of the discussion, and she doesn’t have her own opinion or point of view which, again, was a criticism leveled against her: That her show had a clear anti-sex work POV compounded by the sloppy conflation of work and trafficking. By the end of the film, it’s clear that she does indeed have a specific point of view, that the film was structured and edited in a way to support that point of view, that she’s not going to engage with the conflation criticism, and that she thinks her critics can sod off.

“I wish we lived in a reality where I could tell just one reality, but that’s not the world we live in, it’s too complicated.” This is Jones seemingly arguing that her critics’ view ignores the reality of the world we live in, which misses the fundamental criticism that sex work and sex trafficking, while inextricably linked, are not the same thing and that it’s not an all-or-nothing proposition. In other words, she’s right that it’s complicated, but unfortunately, Jones doesn’t seem willing to really explore that complication and the nuances that lie within. Late in the film, Jones speaks to another complicated part of this muddle of issue, which is that for many underprivileged and minorities, any involvement in the sex industry is less a matter of choice and more a decision of last resort. It’s an important part of the conversation — where is the work truly chosen and empowering work versus where it’s coercion or something worse — and one that in retrospect clearly drives Jones’ overall view against sex work. But, again, she rushes through it in a way to seemingly really drive back to her family’s own trauma with sex work as an attempted last-minute bona fide for why she can ultimately tell this story. From there, she concludes the film’s narrative by turning down the studio because they were going to make her focus on the decriminalization arguments more than she believes is necessary.

One need not begrudge Jones for any views she has; she is entitled to tell her own stories and to help others tell their stories. I’m not here trying to argue that this film never should have been made because of its content or point of view. But I do wish the film had been more honest.

Sell/Buy/Date had its world premiere at the 2022 SXSW Conference.


← It's Millennial, Leftist Presidential Inauguration Everybody: Gabriel Boric Faces the Country | One Actor Had It Even Worse than Taylor Kitsch After 'John Carter' Bombed →