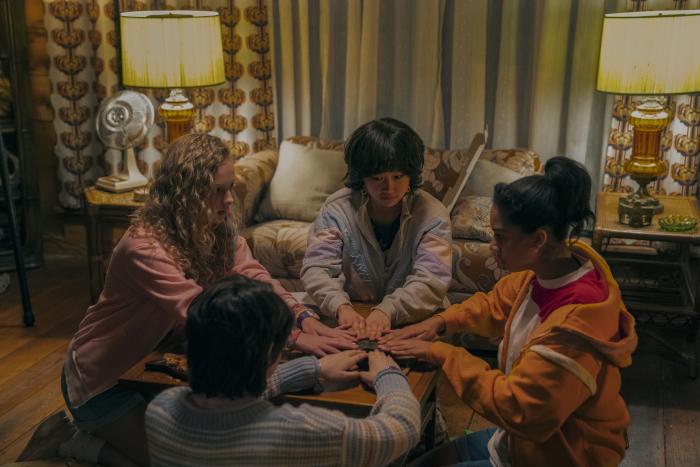 A horror film set in high school is a genius combination. The first times you experience and trying to figure out what to do with the rest of your life, combined with changing hormones, create that unbearable angst. Horror can play up the scary experience of high school in relatable ways that many genres can’t, and we don’t get enough school-set horror comedies. A film of those genres centered in that space that includes possession elements is something we rarely see and is a combination that, when done right, could encapsulate everything we experienced and felt but allow us to also cathartically laugh about it. The mix of comedy and horror can be difficult to balance, and unfortunately, Damon Thomas’s My Best Friend’s Exorcism never finds its footing.

A-ha’s “Take On Me” plays as two best friends have their nightly call on their landlines while taking a magazine quiz. We’re back to the 1980s. It was a great era for horror films and has grown increasingly popular as a setting for modern horror. And with possession horror films like Christine and The Evil Dead coming out that decade, it makes sense that Jenna Lamia’s script (based on the best-selling novel by Grady Hendrix) would want to bring its own take into the mix.

Abby (Elsie Fisher) and Gretchen (Amiah Miller) are opposites. Like the iconic closet scene from New York Minute, their different styles and personalities are established through their clothing and bedroom decor. Gretchen is the confident girly girl, while Abby would typically be the outcast in high school movies with her awkward demeanor, tomboy style, and pimple-covered face. It’s the central relationship that the filmmakers successfully make their audience care about, especially as they come to terms with Gretchen moving away after the school year.

Glee (Cathy Ang), Margaret (Rachel Ogechi Kanu), and Wallace (Clayton Royal Johnson) make up the rest of this friend group. Thanks to a slow walk down the halls, we know them as the popular kids in school. But you immediately question why Gretchen and Abby are among “friends” that are constantly mean to each other and are honestly just an unlikeable group of bullies. This is a characterization that often doesn’t result in an enjoyable viewing experience, but we still have the titular exorcism to look forward to.

One weekend, the group decides to go to Margaret’s lake house for a weekend of drugs, drinking, and as it turns out demons. Across the lake from the house is a rancid building where urban legend says a girl named Molly was sacrificed in a satanic ritual. The camera voyeuristically narrows in on the friends from a distance, suggesting something is indeed watching them from across the way. (Rockwell’s “Somebody’s Watching Me” playing in the background is a bit too on the nose.) They’re curious if there’s any truth to that story, so they pull out an ouija board in hopes of communicating with Molly. Lights flicker and banging noises are heard in the house as they do appear to be communicating with something, and it’s the first setup for a scare that doesn’t land. None of them will land for the rest of the film in their terrible execution, this includes the moments of body horror. You would think that Gretchen and Abby deciding to venture where they shouldn’t, into the abandoned building, would result in some spook from the supposed demon. But despite some devil trickery separating them, we never see any terrifying manifestations. Gretchen though, as you probably guessed, becomes possessed. At first, her change in behavior is dismissed as just after-effects of the drugs they took, but then Abby misinterprets her ordeal as PTSD from a sexual assault that occurred in the building that night. Eventually, in an attempt to try to re-piece everything that happened, she clues in that Gretchen’s plight is demonic in nature.

Unfortunately, the scares aren’t the only things about the film that are terrible — most of it is. From the subpar acting to the flat line delivery to the weak dialogue, it’s all disappointingly dull and laughable. This is a surprise in many ways, especially when the film has Elsie Fisher who is superb in Eighth Grade. Weaknesses in the script not only bring our performances down but the story in general. Firstly, it could have taken the opportunity to include some queer representation. At first, the film hints at something more between Gretchen and Abby, but then it just makes fun of that idea and queerness as a whole. As the film takes place in a catholic school in the 1980s, there would be some homophobia present. But when it’s among the film’s main characters, it just results in one of the many things that make them unlikable. Plus, as a horror comedy, it’s almost completely drained of any humor with unfunny gimmicks, like a group of weightlifting brothers coming to their school to try to lift them up to the lord like a dumbbell.

My Best Friend’s Exorcism could have improved on a subgenre of horror through a teenage lens. Instead, it sticks to everything we’ve already seen before in films like The Exorcist but somehow executes them poorly. Trying to find good things to say about the film is difficult, but if it weren’t for Gretchen’s transformation, it would be a watch to turn off early. Miller delivers the strongest performance, but really because she gets more to do. It’s fascinating to see her change into a completely different person just by one look of anger. After many moments where she spaces out and responds irritably to everyone and everything around her, she becomes more and more unhinged as a dark cloud creeps closer to her. She takes a pretty sadistic turn as she enacts mental and physical cruelty on all her friends - it’s stressful to watch. Another performance that makes an impression is Christopher Lowell as Christian, one of the brothers in the weightlifting group. His character is the one who explains to Abby what’s really going on with Gretchen and agrees to do the exorcism himself. His charisma makes him one of the more tolerable performances and he brings the only humor into the mix as he conducts this exorcism in a comical way that’s never (or has rarely) been seen before. The titular exorcism is the best part of the film, and it could have been a strong way to go out, but it’s all ruined by a god-awful CGI fight scene.

The biggest mistake of My Best Friend’s Exorcism is it focused for so long on a half-baked assault narrative that was just victim-shaming. The film could have really turned up its horror elements to create an allegory of puberty. We fall possessed to the whim of our hormones and our body, especially women whose energy is drained out of them every month, like a demon feeding on a soul. Possession is the perfect element to incorporate into a high school horror film because some girls go insane and do a personality one-eighty when their hormones get the better of them. In the end, the film is a really disappointing watch that could have been so much more.