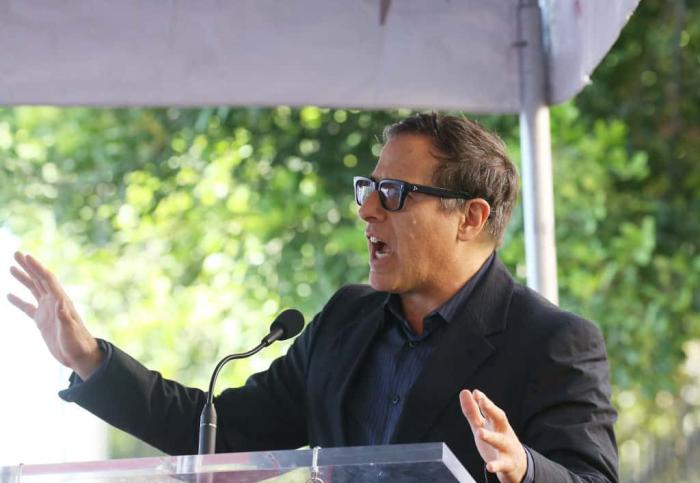 Cats star Taylor Swift is but one of the many big names on board for a new as-yet-untitled film, courtesy of 20th Century Studios. The Hollywood Reporter revealed that Swift will be seen on the big screen alongside Margot Robbie, Christian Bale, Rami Malek, John David Washington, Mike Myers, Anya Taylor Joy, Chris Rock, Michael Shannon, Timothy Olyphant, and Zoe Saldana. Not too shabby, right? And the director? David O. Russell.

That name may ring a bell because Russell, a multi-Oscar nominated filmmaker, is one of the industry’s most notorious a**holes. His career has been defined by his notorious outbursts, screaming matches, and seeming love of humiliating his actors. Maybe you remember him from the stories of his time making Three Kings, wherein he was so aggressive that the second assistant director quit. This is the guy who harassed and berated George Clooney so much that the actor came close to hitting him. Russell even started banging him on the head and said, ‘Hit me, you pussy, hit me.’ Clooney called the shoot the worst experience of his life.

this interview with George Clooney where he recounts his experience working with David O. Russell is batshit. And people continue to work with Russell??? pic.twitter.com/muuO5NjKGC

Or perhaps you know Russell from the infamous leaked footage of the set of I Heart Huckabees, wherein he screamed at Lily Tomlin.

OR you know him from his endless abuse towards Amy Adams that resulted in her crying almost every single day on the set of American Hustle. ‘He did. He was hard on me, that’s for sure. It was a lot,’ Adams told GQ.

OOOOOOOR you know him from PUTTING CHRISTOPHER NOLAN INTO A HEADLOCK at a party because he wanted Jude Law in his movie over Nolan’s.

Or maybe you know him because, in 2011, Russell’s transgender niece Nicole Peloquin, at the time aged 19, filed a report against him. She accused him of groping her at the gym. Russell does not deny that these events took place. Rather, as he told the police, his niece was ‘acting very provocative toward him’ and invited him to feel her breasts. He also admitted to being ‘curious about the breast enhancement.’ The case was later closed and no charges were pressed.

None of this is a secret. Russell’s abusive nonsense and terrorizing of sets are as well-known as his mediocre films. All of this is extremely easy to find online and is well-known in Hollywood. You’d struggle to find a profile of Russell that doesn’t mention it. And yet people still f**king flock to make movies with him. Big stars too, ones who you’d think would know better about collaborating with a director with an extensively documented sh*tty past (hi, Rami Malek.) As one of the emails from the infamous Sony leak noted, ‘His abuse and lunatic behavior are extreme even by Hollywood standards.’

So why the hell do people keep working with him? Is there an answer more sophisticated than ‘for the money and clout’? Probably not. Russell’s films are beloved by the Academy, for some reason. Jennifer Lawrence, who once said she loved working with Russell because ‘I’m not so sensitive, we can really talk, like man-to-man,’ has one Oscar and two other nominations from working with him. Amy Adams landed two. As did Christian Bale, plus his sole win. Bradley Cooper got two nominations from Russell films. Melissa Leo won one. We know how often the industry has proven itself ready to turn a blind eye if the price is right or a certain statuette is in reach, hence Weinstein and Rudin’s extensive reigns of terror.

I can already hear the well-practiced PR lines these actors will give on the promotional trail. Oh, Russell is tough but fair and I learned so much working with him. He’s just so passionate about his work and he pushed me to my limit. Honestly, I’d rather they all just say they don’t care about the groping allegation or his abuse of colleagues. Just be truthful, say you’re more interested in getting paid and running your awards campaign.

You don’t get to talk about how you’re happy that the industry is making such leaps and bounds in the post-#MeToo era if you’re ready to buoy the continued success of a man who sees violence and intimidation as acceptable tools of labor. You don’t get to claim even a sliver of the moral high-ground when you’re sucking up to the guy who admitted to groping his niece but she totally came onto him, you guys.

The hypocrisy is staggering, but admit it, none of this is surprising in the least.

← In Pictures: The Cast for HBO Max's 'The Staircase' True Crime Series is Outstanding | Brazil President Chooses Football to Distract From Crisis →