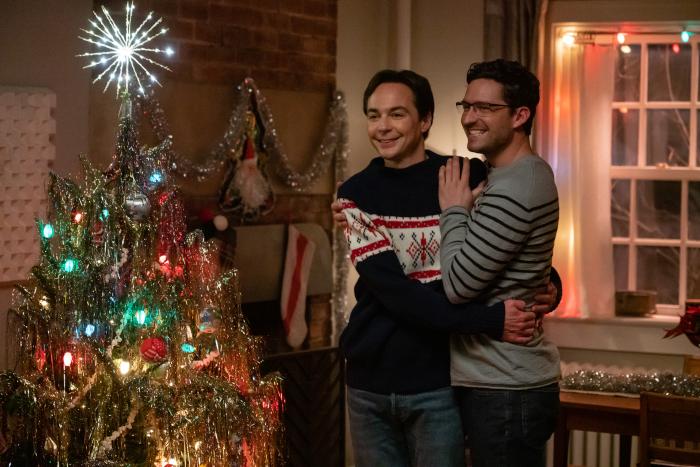 'Spoiler Alert' Will Have You Crying Under the Mistletoe

The romance genre is full of picture-perfect love stories — but we want the real thing. And getting the real thing also means diversifying the genre. This year, films like Fire Island and Bros put relationships between men front and centre. As both are breezy comedies, it was only a matter of time before we’d get a more dramatic entry that would have us reaching for the tissue box.

Michael Showalter’s Spoiler Alert, based on the memoir Spoiler Alert: The Hero Dies by Michael Ausiello, follows the relationship between the book’s author and his husband Kit (played by Ben Aldridge). This romance begins at its end, the title becoming very fitting. We are given a sense of how their relationship will play out, and Brian H. Kim’s soft, melancholy score braces us for impact. Jim Parsons’ narration as Michael speaking to Kit, reminiscing on their time together, lets the audience in on how they met over a decade earlier.

Reflecting on all the sad soap operas he watched with his mother as a child, Michael was determined not to have his life turn out like that. He wanted his life to be a happy one, and he was on the right path working his dream job at TV Guide. One night at a club he spots Kit from across the room. There’s an immediate attraction between the pair — the rest is history. Films like this are a treat because you get to learn so much about the central characters as their relationship develops and evolves. We see Kit and Michael’s first date, the first night spent together, the first time meeting the parents, the first apartment, and the first Christmas. (Yes, jot this down as a Christmas movie). The screenplay by David Marshall Grant and Dan Savage captures the overwhelming emotions and fears that arrive when in a new relationship. You fear your heart broken; you fear not being accepted as yourself (understandable when you have a massive Smurf collection like Michael does); you fear not being able to please your partner’s friends and family; in Kit’s case, you fear coming out to your parents after all this time. The film is an emotional rollercoaster as we see Michael and Kit’s relationship at its best and its very worst, and you feel happiness and heartbreak with them.

The cast is key to a romance film’s success, and luckily Parsons and Aldridge are the perfect onscreen pairing. Parsons’ Michael is adorably awkward with a relatable self-consciousness. Aldridge’s Kit is the opposite with his confidence but is also charming in his patience. Both actors give incredibly vulnerable performances and Aldridge’s is especially affecting. Through their performances, you can feel how much the characters love each other, even when arguing in couples therapy. Comedy is also natural across the board, including with Sally Field and Bill Irwin as Kit’s parents. They’re a delight to have onscreen as the old bickering couple who don’t mind their business but who are nothing but loving and supportive to both Kit and Michael.

Spoiler Alert often seems to struggle to find its personality outside the heteronormative romance movies and fails to feel as fresh as the other two previously mentioned films, but it does incorporate some fun elements like presenting Michael’s childhood as an old TV sitcom. It also manages to affect its audience emotionally maybe even more so than Bros or Fire Island, but it almost derails that with the structure of one of its most pivotal scenes. Overall, though, Spoiler Alert is an incredibly sweet and sincere exploration of love and relationships, and also turns out to be a touching film about found family. It succeeds in exuding what we look for most this time of year: warmth.


← 'Matt Rogers: Have You Heard of Christmas?' Is the Moment | David Letterman's Experience with Kanye West Was Not a Good One →