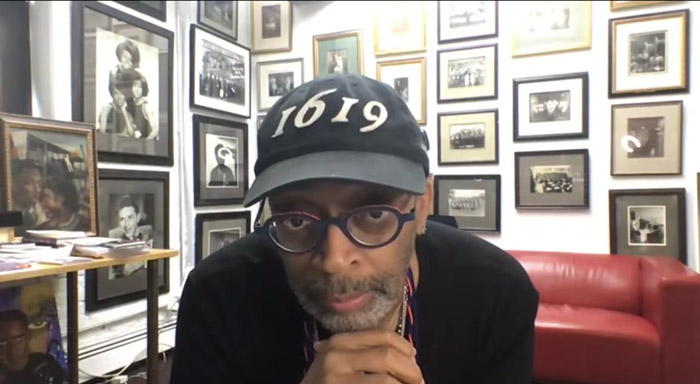 “Will History Stop Repeating Itself?” This is the question Spike Lee poses in his latest short film, “3 Brothers.” In it, the acclaimed Black American filmmaker intercuts scenes from his seminal film Do The Right Thing with footage of police brutality enacted against Black men. Lee draws a direct line from the murder of his iconic character, Radio Raheem, to Eric Garner, a Black New Yorker who was choked to death by the NYPD in 2014, and George Floyd, a Black resident of Minneapolis, who was killed last month by a white officer who kneeled on his neck for 8 minutes and 46 seconds.

As Black Lives Matter marches rise again across the nation, Lee’s 1989 film has been once more touted as must-see cinema. So, Lee is taking this moment to remind people that Do The Right Thing’s climactic killing was based on a real-life tragedy. He explained the connection on The Tonight Show with Jimmy Fallon.

“Radio Raheem is a fictional character from my 1989 film Do The Right Thing,” Lee begins, “But his murder is based upon the real murder of Michael Stewart, who was a graffiti artist here in New York City, 1983.” Lee continues, “First Avenue subway station, New York City Transit Authority Police jumped on him, put him in a stranglehold and he died in a coma several days after that.”

Here’s the interview. Lee’s short “3 Brothers” begins at the 3:20 mark of the embed below. The film includes graphic violence because it includes video of police officers brutalizing Black men.

Speaking to the BLM demonstrations going on now, Lee said “Jimmy, my brother, people are there.” Lee spoke of how he attended a march in Brooklyn this week, and noted, “To see this young, white generation—my sisters and brothers, they’re out there. It’s not just Black and Brown people. So I’m very, very enthusiastic that people around the world were galvanized by the horrific murder of George Floyd and are saying, ‘No. No. No.’ And also, I think people are going to come out to vote…People are going to come out to vote to say hell no to Agent Orange (Donald Trump). ‘You got to go.’ That’s my hope. That’s my prayer.”

Lee ended this segment with some advice to Trump, offering, “If I may say, sometimes I just think that he should just be quiet. For him, to speak for George Floyd looking down from heaven, saying that this is a great day in America? Just don’t say nothing! Stop! You should not be talking—you should not be speaking about our brother.”

← Whoa! Watch the 'Bill and Ted Face the Music' Trailer | The President Tweets a Conspiracy Theory About the Buffalo Protestor Shoved by Police →