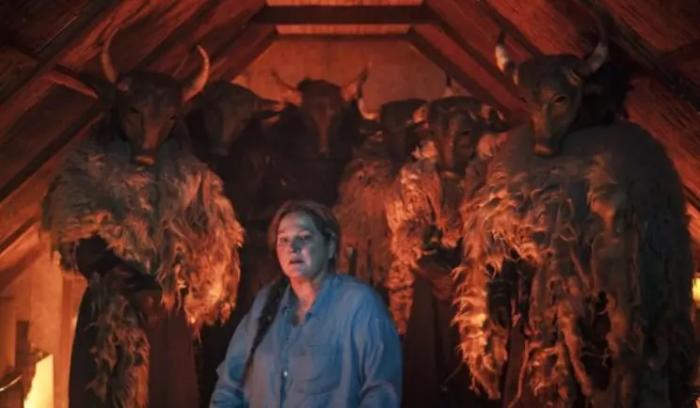 Shudder's ‘Moloch’ Is a Treat of Atmospheric Horror

Nico van den Brink’s feature debut is a Dutch folk horror seeping with dread. Co-written alongside Daan Bakker, Moloch is a treat of atmospheric fright, both nightmarish and dreamy, that digs up a family’s tie to an ancient curse and the generational trauma that has haunted them as a result.

Emo Weemhoff’s camera established right away that the setting of this film is an ancestral one, as he pans to family photos on a wall that go back decades, even centuries. Then, a scene warning of the terror that’s to come follows, with a scream and blood dripping through the floorboards. Betriek (Sallie Harmsen) lives at this home with her parents (played by Anneke Blok and Ad van Kempen) and her daughter Hanna (Noor van der Velden), and it’s a wonder why they stay there despite the obvious history. However, it may not be the house that’s bringing all this malaise, as it sits next to a bog whose eeriness gives the impression that it’s a perilous task to cross. Whispers of otherworldly voices travel within the bog’s mist, infecting the ears of all who will listen. When a man is found dead after digging up the body of a well-preserved woman, it’s clear that the bog also holds a big mystery. This becomes especially clear when all three women in the home have nightmares upon the discovery of this Jane Doe. It’s hinted that there’s a link between them and that their unprocessed trauma has been unearthed along with this corpse. A group of researchers come to investigate and Betriek befriends one of them, Jonas (Alexandre Willaume). While speaking with him, we learn that the town believes her family is cursed. With a rich history of death and illness, and the violence they encounter in the film, Betriek can’t help but believe it. Something paranormal is going on, tied to the Dutch folklore of Moloch — the god of child sacrifice — and Betriek has to try to make sense of it before it’s too late.

A bog is the perfect setting for a horror film. It’s so lush with green during the day that it seems impossible that there’s so much death lying underneath. Even the home during the day looks completely different, and that has as much to do with Romke Faber’s production design as it does Emo Weemhoff’s cinematography. Both are able to capture both sides of this coin, which helps make the film’s atmosphere so effective at providing the spooks — going way beyond what jump scares could do. Ella van der Woude’s electronic score elevates the sinking feeling of anxiety that the characters carry, and the performances are compelling, especially Harmsen who has to act like a mother who has everything together. You’re just waiting for her breaking point, and when it comes, you can feel the effects of having to hear about and see what her family has had to endure through her anguish.

Admittedly, Moloch is painfully slow at times, but even when it eases up on the spooks, it’s still an engaging family drama. The final act delivers satisfying terror but also an unexpected, shocking twist. Just as this family’s trauma has haunted them, the film’s final minutes won’t escape memory any time soon.

Moloch was screened as part of the 2022 Fantasia International Film Festival.


← Just the Best Of That 'Would You Move To Gotham?' Twitter Meme | Everything About B.J. Novak's Directorial Debut 'Vengeance' Is Solid, Except B.J. Novak →