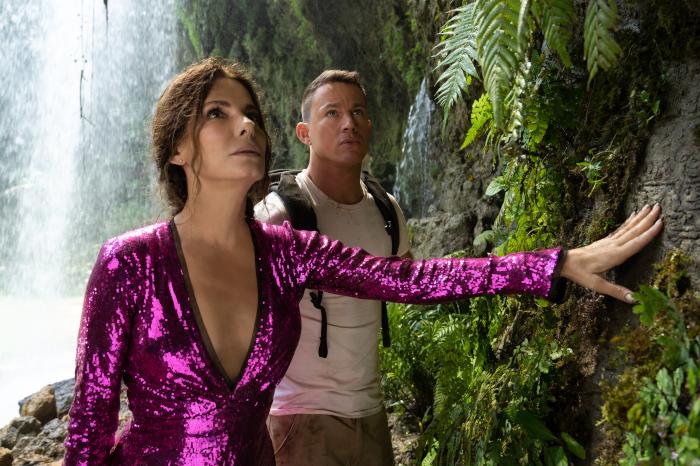 Remember Movie Stars? They were human beings, just ones who starred in the movies, but the mere sight of them just speaking or smoking or heavens-to-Betsy dancing sold tons of movie tickets. They could be accountants doing accounting, or lawyers lawyering. Or maybe they cooked some food and had some conversations with another one of their own transcendent kind. Maybe you don’t remember, maybe I’m showing my age here, and when I say the words “Movie Stars,” what you picture is a spandex bodysuit with a beautiful head of hair floating several inches above it. But The Lost City, this weekend’s breezy to the point of blow-away action-romance, starring genuine movie stars Sandra Bullock (of The Net fame) and Channing Tatum (one-time G.I. Joe: Rise of the Cobra mega-watter), wants nay needs us to remember what Movie Stars are since its very life depends upon it.

There’s not much else propping it up, that’s for sure. A surface-level skim of Robert Zemeckis’ now-enshrined 1984 classic Romancing the Stone with Michael Douglas and Kathleen Turner (itself a bit of a skim of The African Queen starring Hepburn and Bogart, no first names required), The Lost City manages to make Zemeckis’ film feel dark and gritty in retrospect. At least in that movie when noted romance novelist Joan Wilder (no I did not have to look that name up, and if you ask nicely I could perform RTS as a one-man-play, I’ve seen it so many damn times in my life) heads off to Cartagena, Colombia, to rescue her kidnapped sister, Colombia looks like a real, tangible place. Shot on location, its jungle sweats, and Turner & Douglas’ brows gleam copiously in return, first for the atmosphere and then for one another.

In The Lost City when Sandy & Chan roll into a small village mid-adventure, the locals seem to have wandered in from the “It’s A Small World” area of Disney World, all dressed in perfectly appointed Ethnic Costumes. (Like, I am pretty sure I saw Mirabel from Encanto waitressing in the background at one point.) The odd thing is The Lost City was also by-all-accounts shot on location in the Dominican Republic — watch the way noted Englishman Radcliffe can’t stop sweating through his fancy-man villain outfits every five seconds of screentime — but it’s all been so buffed to a high-gloss flaw-free sheen and enhanced (I use that word broadly) by CG fakery that I’d believe this was shot in the backyard of Bullock’s movie star compound if you told me that was the case.

Yet the movie is still pretty inoffensive and often kind of charming in its fleeting stakes-less way, mostly because of how terrifyingly novel it has become, watching Movie Stars get to just coast on that for ninety minutes. Bullock and Tatum are very good, very charming movie stars, cognizant of their packaged personalities and front-facing strengths, and co-directors Aaron and Adam Nee thankfully know that time, precisely its brevity, is in this instance of the utmost essence. They hurl us right into the story (which is to say “the heap of familiar scenes arranged into a beginning, a middle, and an end” that they’re passing off as a story here) without much fuss, and not any muss. (Muss-lovers, beware! This is not the movie for you.)

Bullock is playing Loretta Sage, a super-successful romance novelist who tried to write books about brainy anthropology but realized quickly they’d sell better if she stuck some heaving bosoms and throbbing members in between all of those dusty relics. (Heaving members and throbbing bosoms however need not apply.) Recently widowed Loretta has been stuck in a passionless rut since her serious-scientist-type husband died, and she’s now staring down an empty computer screen like the barrel of a gun — although really she should try writing a thousand words about this movie and see how she does then. Unfortunately, Loretta’s fans are beginning to notice her indifference too, as her latest tome’s been met by even her most fervent admirers with a bit of a shrug.

Thankfully her exasperated (is there any other kind) book editor (played by the always terrific Da’Vine Joy Randolph) has them a secret weapon with their Fabio-esque cover-model Alan (Tatum), who’s agreed to do the book tour with Loretta, one gratuitous shirt-ripping at a time. Yet even Alan, for all his lustrous lock tosses and lip gloss applications, roils with barely suppressed over-it energy in Loretta’s presence too — at their very first book event he can hardly enthuse the energy to rip a single shirt off! Woe be unto us all — won’t they think of us and our collective Channing Tatum cleavage requirements? If he loses that enthusiasm I think we can all agree it’s time to pack it in.

But then, as if on cue (as is every step the surprise-free script takes), enter stage-right the dastardly billionaire media empire scion Abigail Fairfax (Radcliffe), who kidnaps Loretta because of some similarities between her new book and the real-world treasure he’s got his greedy billionaire’s mind set on acquiring. He’s been digging up a sinking volcanic island on the other side of the globe trying to find a crown of red jewels before the volcano and/or the sinking makes said task impossible, and Loretta’s just the gal to decode the snatch of map that he’s so far managed to uncover. Thankfully for her though, cover-boy Alan sees Loretta whisked away in one of those tell-tale black SUVs that are always making with the whisking, and voila, we’ve got ourselves a proper romantic-to-be chase.

The original title of The Lost City was The Lost City of D, and please do mourn the “D” because that peculiar and bawdy touch typifies too much of what’s been sanded down here—sure we get a scene involving leeches where Tatum’s stripped naked and his special-effect of a bum fills the entire screen for several moments of transcendent cinema. But Bullock and Tatum generate a sibling camaraderie more than they do any actual heat; I was definitely looking with far more lustful disrespect in the audience than Sandy was managing to summon there in person. Still, the easy camaraderie is there, if not precisely what the movie wants it to be, and The Lost City goes down very easy indeed. None of it is going to stick around for four decades to the point where I’m promising to do my One-Man Show of it a la the adventures of Joan Wilder & Co., not in the slightest. But I am not the person to say there aren’t real, palpable, old-school charms to just watching Sandy & Chan chat and dance and Movie Star sparkle on our movie screens for a bit.

← This Week's Dramatic 'Survivor' Endured an Impossible Immunity Challenge and a Wild Tribal Council | HBO's 'Minx': A Surprising Amount of Heart For This Sexy Series →