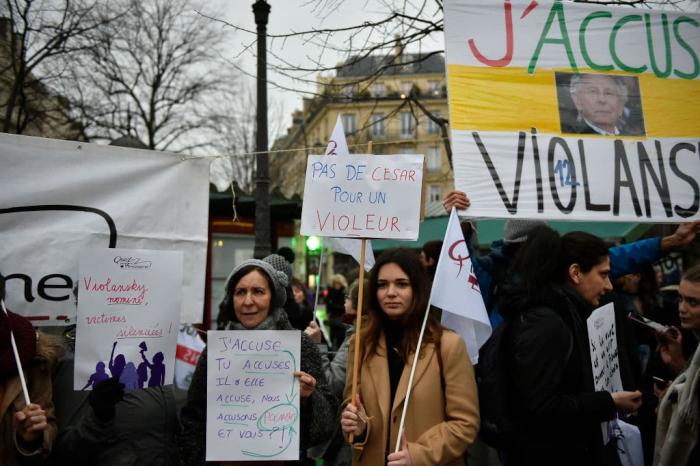 Whenever we’ve heard the tedious whining about cancel culture or how false accusations of abuse ruin men’s lives, I always think of self-confessed child rapist Roman Polanski. The director has been living in France since 1978 after fleeing the United States before he faced sentencing for pleading guilty to ‘unlawful sex with a minor.’ That’s legal jargon for ‘he admitted to drugging and raping a 13-year-old girl and has never denied this.’

Over the past 45 years or so, Polanski has never stopped working as a filmmaker. Indeed, he’s only grown more acclaimed and beloved overseas, winning multiple Cesar Awards, the Palme d’Or, and the Oscar for Best Director. But even Roman Polanski has had to face minor consequences for his actions several decades late. His latest Cesar win for An Officer and a Spy led to the 21-member board of the organization that oversees the Césars to resign en masse. Actress Adele Haenel, who recently announced that she was leaving the film industry due to its rampant sexism and racism, walked out of the ceremony when his name was announced. His movie was still a big hit in France and won the Silver Lion at the Venice Film Festival (bested only by Joker), but that blinding adoration for him has dimmed.

According to Variety, his latest film, The Palace, has been unable to find any French financing. There are also questions over whether it will garner the same level of distribution in France as his previous films. This has made his producer, Luca Barbareschi, very upset. He told Variety:

‘I managed to mount the production over the course of a year without France since France didn’t want to invest a Euro on Polanski. This really wounded me. If this film doesn’t get released in France, it’s a crime.’

Yup. It’s a crime that a rich predator can’t get other rich people to give him money to make a movie. What a miscarriage of justice. I hope when people Google ‘Roman Polanski crime’ they’ll be able to find further evidence of this…

Oh come on, do I even need to finish the joke?

This sh*t is obviously ludicrous and tacky and pig-headed in a way that makes even all the other egotistical maniacs in the film world guffaw. Remember, this new movie of Polanski’s already closed deals with unspecified distributors in Germany and Spain, as Variety notes. He’s still pulling in big names to work with him, from Fanny Ardant to John f**king Cleese (I suppose his recent trite anti-cancel culture rambling needed further fuel to pwn the libs.) They’re still planning a theatrical release across Europe this November.

I doubt facing actual repercussions will hurt this dude. Hell, multiple women have accused him of harassment and assault and the industry didn’t care. He’s worked with everyone from Johnny Depp to Harrison Ford, Eva Green to Jean Dujardin, Kate Winslet to Jodie Foster, and too many other A-Listers to count. None of them cared about bolstering Polanski’s power until it was too publicly embarrassing to do so. I’m sure the French film industry will once again rally around Polanski once the heat is off. He may even inspire a new flurry of fans who exist only to support total sh*tbag abusers while pretending it’s a free speech issue (hello, the current era of Louis CK defenders.)


← Conan O'Brien Knows Exactly Who Should Play Him In A Movie | 'Atlanta' Season Finale Recap, 'Tarrare:' We Need To Talk About Vanessa →