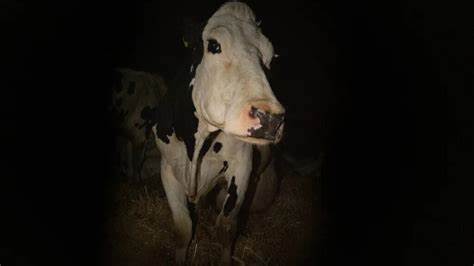 Review: With 'Cow,' Andrea Arnold Offers an Unflinching Look into the Daily Lives of Animals Born for Food

Luma is a cow. She lives in a milking facility. Her days revolve around being herded from pen to pen, being fed, milked, and bred. She has multiple calves, from whom she is almost immediately separated upon birthing them. Such is the bovine life, a familiar and seemingly unremarkable one that director Andrea Arnold has elevated to utmost importance with her new documentary. It is, appropriately titled, Cow.

In 2020, upon winning the Oscar for Best Actor, Joaquin Phoenix, arguably the most famous vegan on the planet right now, gave a speech wherein he referenced the artificial insemination of cows to produce milk for the human masses. It elicited mockery from some but also a surprising amount of shock from those who had no idea where their daily semi-skimmed intake came from. Documenting this process is, for Arnold, not a time to propagandize but neither is it a moment for her to turn off her empathy. For 90 minutes, this near-wordless and narration-free experience doesn’t think speeches are needed. The milking facility isn’t the idyllic country meadow of many a butter tub but she also avoids exaggerating the bleakness of Luma’s surroundings. With the camera often mere inches from this admittedly handsome cow, we see anatomical details we may have otherwise not considered: the dirty yellow tag on her ear; the gooey aftermath of birth still dripping from her vagina (and the afterbirth process); the curl of her lashes.

With something like Cow, it’s too easy to start anthropomorphizing these animals, especially as the few humans we see and hear seldom show their faces. The film opens with Luma giving birth then, having been separated from her baby, staring into the camera for a minute-long uninterrupted shot. Is she devastated? Unfeeling? What do her moos signify? You certainly sense anguish on a purely primal level, if only because it becomes very easy to project our own concerns onto such familiar creatures. Luma moos loudly to call out to her calf when they’re apart in ways the other cows don’t. Maybe we’re not so different, after all.

The 2020 documentary Gunda (executive produced by Joaquin Phoenix) offered a similar narrative, following the life of a pig and her babies on a seemingly utopian county farm. That movie tried to create a scenario of animal life seemingly untouched by human meddling, which some viewers found dishonest. This facility is muddy, hay-covered, and often covered in milk residue. For Arnold, the real conflict comes with that inextricable union. Luma is in this milking facility for a purpose and it’s one that she’ll undergo constantly until her death: breeding, birthing, milking, later, rinse, repeat. Watching it is tedious yet hypnotic, a painfully reliable cycle you could set your watch to. Only the quick flash of a farmer in a Santa hat as ‘Fairytale of New York’ plays on the radio gives any indication of the true passage of time. The human invasion of unexpectedly chipper men performing invasive medical checks to make sure the ‘big girl’ is ready for another round of impregnation hit hard. As does watching a woman methodically dehorning Luma’s calves with what looks like a blowtorch. It’s big business, especially in the UK where the film is shot. These are people doing a job and Arnold doesn’t demonize them for it. This, at the very least, seems to be a well-run facility where the workers care for the cows, as much as they are able to. The focus isn’t on them. They’re mere tools in the machine.

It’s rare for Arnold’s camera to offer any scant possibility of editorializing. This isn’t a PETA operation, after all. She does get a touch cheeky when shooting Luma’s latest round of ‘seduction’ from the bull of the moment, which features the farmers’ pop music and literal fireworks in the background. But her intrusion as a filmmaker is not noted. While Magda Kowalczyk’s cinematography is clear-eyed and an obvious intruder to this reality, the film works hard to be an observer on the level of these cows. It follows Luma, sometimes pulling backward suddenly to avoid being knocked over. There’s nothing here that the cows themselves wouldn’t see at some point, no cut to the world outside the facility or packaged end result of all this milking. This is the life that Luma leads, and the one that her female calves will have long after she’s gone. One farmer literally goes ‘yay’ when one calf is revealed to be a girl.

You know how this film ends. It’s not a shock or a twist. To flinch away from this inevitability would be dishonest for Arnold. That does mean that you spend the film in a tense state, prepping for the sting. Towards the end, Luma seems hesitant to return to the pen and you can’t help but want her to have a Hollywood-style great escape. What comes hurts to watch. Knowing that doesn’t make it easier.

For some, it will be impossible to watch Cow and not feel as though they’re being told to go vegan and throw away all of their fine leather goods. That kind of proselytising doesn’t seem to be Arnold’s objective. Rather, this is a focus on the oft-ignored but ruthlessly efficient industry that is food production for humans. This is what it takes to make milk. This is what we should probably be thinking about when we do our weekly shop. Isn’t it kind of astounding that we endlessly impregnate cows so that we can have something for our cereal and morning tea? Your patience for Cow will depend on your personal cynicism when it comes to this sort of film, plotless and intimate and opposed to many of the conventions of the documentary we’ve come to rely on as viewers. Maybe you’ll watch it and order a cheeseburger afterwards. I will say it made me happy that I switched over to oat milk a couple of years ago.

Cow is in limited release in American cinemas this week. It can be viewed in the UK on MUBI.