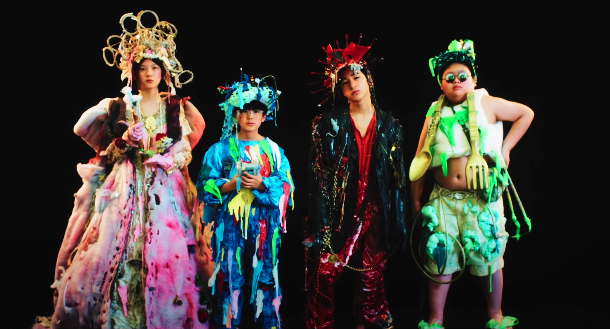 What a thankless task it must have been to be tasked with drafting a plot synopsis for We Are Little Zombies. The chasm between what happens in the movie and what it’s about — what it does — is deep, and I feel like I’m about to tip into that same deep hole right now. This festival darling, the first feature film from director Makoto Nagahisa (whose short film, And So We Put Goldfish In The Swimming Pool, was the first Japanese recipient to pick up the Short Film Grand Jury prize at Sundance), is a mass of contradictions. The story follows a legendary quartet of 13-year-old orphans who meet at the crematorium where their parents are being reduced to ashes, bond over their inability to feel sadness over their loss, and run away to form an “emo” band. It’s deadly serious, when it’s not being patently ridiculous. It’s a pitch-black comedy painted in neon and candy. It’s a music video. It’s a dream. It also might be one of the best depictions of the ephemeral tween mindset I’ve ever witnessed.

Hikari (Keita Ninomiya) takes only his favorite old-school pocket console when he runs away with his three new friends after his parents die in a bus crash on a strawberry field tour to repair their marriage — and that 8-bit RPG provides a semblance of structure to the journey the kids embark on. The film unfolds in levels, with achievements as items are acquired and even multiple endings. Their quest takes them back to each of their empty homes: the remains of the restaurant where Ishi’s (Satoshi Mizuno) parents died in a gas explosion; the workshop where Takemura’s (Mondo Okumura) abusive parents committed suicide; the fancy home where Ikuko’s (Sena Nakajima) parents were murdered by her piano teacher. If the kids feel nothing over their loss, it’s because they’d been disconnected from their lives to begin with. In their own unique ways they’d each been ignored, unloved, and bullied. Being suddenly unmoored gives them the freedom to stop pretending to fit in at all.

And so, like so many misfits before them, they form a band.

Their absolute banger of a first single, “We Are Little Zombies” — an ode to their own in-between existence, an emo song lacking emotion — becomes an overnight internet sensation and propels them into the spotlight. They get a manager, produce an album, are packaged and photographed and put on tour. They are exploited. Their fandom turns toxic. Their success is fleeting. And through it all the disconnect remains, as though it’s happening around them, to them, and they are unmoved. Even this, the first thing they’ve accomplished for themselves, isn’t something they hold tightly onto.

Though the film is always firmly told from the kids’ — and mostly Hikari’s — point of view, it also recognizes them to be unreliable narrators. Not because they are liars but because, like any 13 year old, they barely understand the world or themselves. They say one thing, then undercut it with an equally un-ironic proclamation a moment later. They may not exactly miss their parents, but they carry with them every lesson their parents taught them about life. They think they feel nothing, but we see constantly how that’s not true. They simply don’t recognize how complex feelings can be. They don’t realize their disconnect is loneliness. Their epic quest has no real goal, but the emotional journey the kids wander is real as they learn to hope for more — for happiness — in the future. They learn to hit “continue” rather than giving up.

The problem, of course, is that I’m making it sound too profound, and We Are Little Zombies is anything but. Despite the serious subject matter, it throws itself into the inner lives of the kids with abandon and a feather-light touch. It skips through genres, plays with format, zigs into the meta before zagging into a Magic Schoolbus riff. It’s a visual kaleidoscope anchored by a killer soundtrack. It’s simply FUN. Perhaps the greatest contradiction of the whole enterprise is the way a movie about feeling nothing manages to be an absolute joy to behold.

We Are Little Zombies opened in digital cinema (and live cinema) on July 10th.