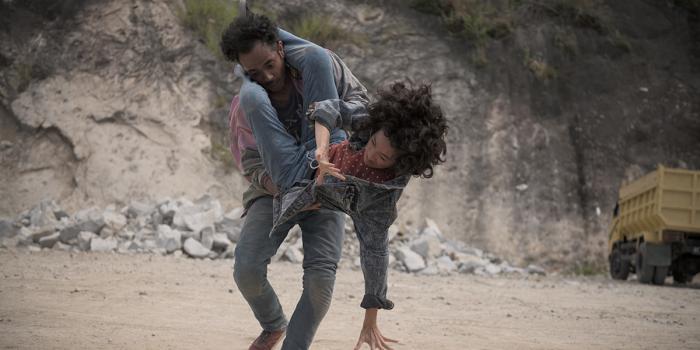 TIFF 2021 Review: ‘Vengeance is Mine, All Others Pay Cash’ Combines Toxic Masculinity, Martial Arts Parody, and Maybe a Sexy Ghost?

Ajo Kawir (Marthino Lio) is a street fighter with an effective predilection for violence. His services can be hired for the right fee, although money is seldom his motivation. Ajo just wants to beat people up. In 1980s Indonesia and a society defined by machismo, it doesn’t seem entirely out of place, although his motivation is less common. Ajo can’t get it up, so he compensates in the way that only toxic masculinity can support. But then he meets Iteung (Ladya Cheryl), a bodyguard who can kick his ass. Of course, love soon blossoms, but can their respective careers, some unpaid dues, and the lack of lead in Ajo’s pencil be put aside in the name of true romance?

Director Edwin is a leading figure of the Indonesian New Wave, a festival favorite who makes movies of varying genres with glorious titles like Blind Pig Who Wants to Fly and Someone’s Wife in the Boat of Someone’s Husband. His newest effort plays at TIFF following its win of the top prize at the Locarno Film Festival, and is co-written by author Eka Kurniawan, the first Indonesian writer to be nominated for the Man Booker International Prize. Based on Kurniawan’s novel, which saw him labeled ‘the Quentin Tarantino of Indonesian literature,’ Vengeance is Mine… is a loving celebration of the ’80s B-movie pulp that both he and Edwin grew up watching. The director, however, insists that it’s more than a mere nostalgic pastiche. Yes, there are jokes and there’s a rather literal take on the impotence of masculinity, but they have more love for their soft-in-the-pants anti-hero than true mockery.

‘Only a man who can’t get it up can face death without fear,’ declares a talking mural at the beginning of the film, after Ajo partakes in a dramatic game of chicken involving motorcycles. No amount of folk cures seem to help Ajo, and the local sex worker is beginning to feel insulted that oral sex isn’t working on her regular client. So, why not prove your masculinity by slicing off people’s ears and pummeling their faces in until there’s nothing left? It doesn’t help that seemingly everyone in town knows that Ajo is impotent. It’s talked about as casually as some discuss the weather.

Iteung doesn’t seem to mind. They first meet when she fights him to protect her sleazy client. Their fight choreography is sharp and skilled, but not overly stylized in the way that one has come to expect with the genre. The Raid, this ain’t, although you definitely feel the punches in the same way Gareth Evans’s furious martial arts masterpiece conveys. Fittingly, given the themes at play here, everything looks extremely painful. Ajo and Iteung have impeccable chemistry during these tiffs, so of course love is on the cards, once Ajo confesses his plight and Iteung reassures him that she doesn’t care. Love will conquer all. But not really. That’s what face-punching is for.

You can’t fault the ambition of Vengeance is Mine… Edwin doesn’t make things easy for himself, throwing together myriad ideas and genre inspirations and a pretty hefty thematic focus. Ajo promises that his fighting days are over once he and Iteung marry, but his inadequacies soon rear their ugly head, a matter not helped by his wife’s ex and her continuing closeness to him, and he’s back to his violent ways. Love doesn’t make him feel like a man. Only ‘kicking ass’ does that. It’s a fair point battered home, but the film struggles to maintain its consistency across an overlong running time. This theme also ends up being more effective in the hands of Iteung. Ladya Cheryl is the film’s stand-out. A regular collaborator of Edwin’s, she finds that sly balance between naïve romanticism and callous brutality. The inescapable cycle of violence impacts her, a former professional bodyguard, as much as her husband. It is, admittedly, a joy to watch her kick male rears over and over, but you also sense the simultaneous glee and pathos in these moments. She really shouldn’t continue this, but what else can she do? She’s simply dealing with a very different kind of male bullsh*t from her husband.

There’s a disheartening lack of consistency throughout Vengeance is Mine… The jokes become few and far between as the running time rolls on. Tonal shifts vary from smooth to jarring, as if the director isn’t sure of where the story is meant to go. About an hour in, a paranormal element is introduced via a sexy woman named Jelita (Ratu Felisha) who emerges from a rubbish pile and might be a ghost? It’s another moment where the film doesn’t seem to know how to fully express its ideas. Edwin clearly wants to imbue his characters with the kind of emotional weight that his inspirations never did, and when the film nails the balance between theme and character, it’s a blast. As a romantic drama, I craved so much more because what we get between Ajo and Iteung really sparks, both in heat-laden fights and in the tumultuous reality of marriage under the shadow of macho culture.

It’s also worth noting, as other more informed critics have, that Vengeance is Mine… is Indonesian to its core, inspired not only by the pop culture of the ’80s but the political circumstances that reinforced a kind of hyper-macho attitude during the 31-year reign of President Suharto. As the director noted in an interview with Variety, ‘Machismo is something the powerful want to indoctrinate the people with […] I feel the culture of machismo needs to be addressed quickly - everywhere, not just in Indonesia, because it kills a lot of sensitivity.’ Indeed, Vengeance is Mine… is deeply empathetic for that reason and works on those terms. It just needed a tighter focus to fully convey its objectives.

Vengeance is Mine, All Others Pay Cash… was screened at the 2021 TIFF film festival. It was acquired by The Match Factory. It currently does not have a release date.

← New Studio, Same Trevor Noah | A Look Back At 'The Blueprint' By Beyoncé's Husband In Honor Of Its 20th Anniversary →