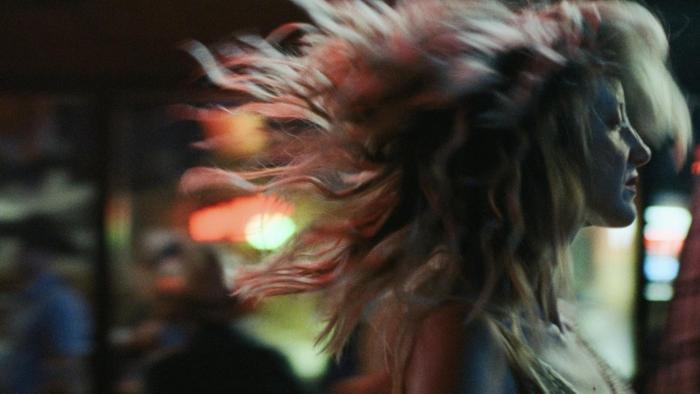 Review: 'To Leslie' is a Portrait of Small-Town Addiction Led by a Gripping Performance

To Leslie has a logline that sounds hopelessly generic — an alcoholic destroys her life and alienates her people, only to meet a sympathetic stranger who may just be able to save her from herself. But these stories are universal because so many of us have faced addiction ourselves or seen close family or friends fight it. Sometimes, these films so closely follow the addiction recovery paint-by-numbers formula that they bring nothing new to the table. Thankfully, To Leslie avoids that trap and even where parts of the story may not feel fresh, everything else about the film is.

The film starts by introducing us to Leslie (Andrea Riseborough), a Texas woman who has just won a six-figure lottery prize. Smash-cut to a number of years later, and Leslie is broke and homeless, her alcoholism having ruined her life and drained her winnings. She first tries to reunite with her estranged 19-year-old son James (Owen Teague), but that quickly goes sideways via a number of heartbreaking scenes where the son finds himself forced into the parental role. With her parents in Florida and seemingly wanting nothing to do with her, Leslie crawls her way back to her small West Texas hometown, where she’s taken in by family friends (played by the always welcome Allison Janney and Stephen Root). That, too, goes sideways, because alcoholism.

Leslie randomly meets Sweeney (Marc Maron) who runs a local motel owned by Royal (Andre Royo) and, for reasons we learn later, has just an iota of empathy and sympathy for Leslie. From there, even a casual movie viewer knows that these stories generally follow one of two paths — redemption (often teeteringly balanced on the head of a pin) or temporary relief followed by an even more painful fall. Both can be fulfilling journeys to watch, and I’m not going to spoil the direction Leslie’s journey takes, although that’s ultimately not the point of the film. Whether she rises or falls, To Leslie is more interested in its viewers finding empathy and, through that empathy, hope in someone else’s story.

That sounds treacly, and in lesser hands, Ryan Binaco’s strong screenplay could have gone very sideways. However, Binaco has written an earnest story that is caring of and sympathetic to almost all of its characters, including (and perhaps most importantly) the small Texas town. Director Michael Morris takes that script and runs with it in his film directorial debut (though he’s no stranger behind the lens, having directed episodes of a number of fantastic shows including Halt and Catch Fire, For All Mankind, and Better Call Saul to name just a few). Morris’ pacing is quiet but steady, with beautiful shots that linger just long enough.

Of course, Morris’ job is easier when you have this cast. Root and especially Janney have small parts but are standouts as always because that’s the only thing they know how to do. Maron, meanwhile, eschews the caustic gruff and crust that often surround his characters, presenting a quietly subdued performance that one can’t help but think is fueled by his own real-life recovery. He makes the perfect scene partner for Riseborough, who is stellar. She creates a Leslie who feels real and complicated in both her highs and lows. Riseborough never resorts to caricature, an easy trap to fall into especially when Leslie is at her lowest and most heinous. In fact, even in those moments, while you want to loathe Leslie, Riseborough instead has you feeling sympathy so that you’re still rooting for her. We’re not even three months in, but this may wind up being one of my favorite performances I’ll see all year.

To Leslie is ultimately not a story of rehabilitation, but of relationships. It’s a reminder that relationships are painfully fragile but, with the right work, also resilient.

To Leslie had its world premiere at the 2022 SXSW Conference.