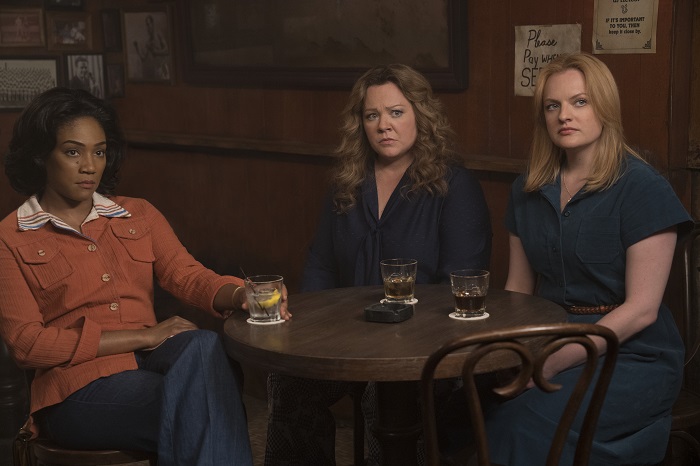 The Kitchen lets you know from its opening scene what kind of movie it is going to be: As “It’s a Man’s Man’s World” plays and Etta James wails about how the world would be “nothing without a woman or a girl,” we see the filthy, filmy New York City of 1978, and the three primary women of the film suffering their matrimonial indignities. Kathy Brennan (Melissa McCarthy) folds laundry as her husband leaves, refusing to answer her question about his plans with his “I got a thing to take care of.” Battered wife Claire Walsh (Elisabeth Moss) holds ice to her bruised face, a soothing gesture her husband mocks. And the disrespected Ruby O’Carroll (Tiffany Haddish) can only stand there and take it as her husband calls her “so fucking lazy” for buying a different kind of beer than the brand he prefers.

All of these women are limited and underestimated by their husbands, and sure, it’s a man’s world, but have you ever thought about what women could do if given the chance? Don’t you think they would just kick ass? That is basically the very simplistic argument of The Kitchen, which lacks nuance in practically every aspect of its filmmaking. The script forces characters to tell us exactly how they’re feeling instead of relying on performances to show it. The narrative jumps forward in huge chunks of time, leaving out important development and context. There are twists and turns that are totally unnecessary, swerving the story in a third-act direction it doesn’t need. Common is here, doing mostly nothing aside from staring stoically and rocking a hilarious mustache. The Kitchen had all the elements to be so, so good, but filmmaker Andrea Berloff, who adapted the comic book series by Ollie Masters and Ming Doyle, can’t make it hang together. The kindest thing to say about The Kitchen is that this could have been three pretty solid movies if each of the women had her own separate film, but as one combined portrait of ’70s womanhood, the cohesion just isn’t there. 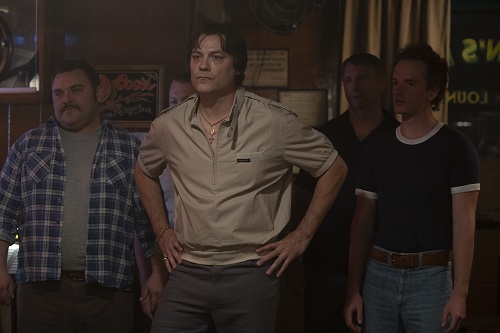 The Kitchen focuses on Kathy, Clare, and Ruby after their husbands Jimmy (Brian d’Arcy James), Rob (Jeremy Bobb), and Kevin (James Badge Dale, as electrifyingly scary here as he was in Mickey and the Bear) are arrested by FBI agents (Common and E.J. Bonilla) following the Irish mob. Sent away for three years, the men assure their wives that the mob, led by Little Jackie Quinn (Myk Watford), will take care of them. But the Irish aren’t running the Hell’s Kitchen neighborhood like they used to: Crime is up and trust in the mob is low, and so payments are down, too. The envelopes of money the women receive aren’t cutting it.

So, on their own, the women that mob matriarch Helen O’Carroll (Margo Martindale) calls “fucking twats” decide to start collecting. They know how to run a family in the domestic sphere, they reason, and is it really that different to foray into organized crime? Apparently not, because suddenly they’re phenomenally successful, counting stacks of cash. What kind of protection are they offering? Just a couple of Kathy’s cousins. (The movie loves making easy “The Irish sure do love having kids!” jokes by mentioning how many of Kathy’s relatives are connected to the mob). But the store owners trust these three women, and soon, there’s a war brewing between Kathy, Clare, and Ruby and the Irish—and then, later on, between the women themselves. 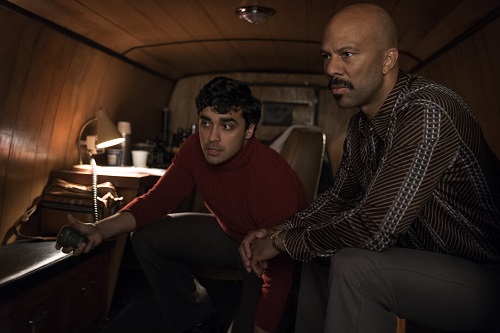 The Kitchen keeps getting compared with Widows, and to a certain degree, I get it: Both imagine women getting revenge on the men who wronged them, and there’s a criminal element and urban focus to each. But Widows took the time to build its world—not necessarily the relationships between the women and their husbands, but the women themselves. Their desires for the future and how their bonds with each other either supported those concepts or lived outside of them was a central concern, alongside explorations into capitalist power, sexism, classism, and racism. The Kitchen isn’t nearly that meticulously designed. Things just happen in this movie with no sort of consequence and no internal effect on the characters’ world, and the only constant in the storytelling is Berloff’s insertion of girl-power-lite dialogue.

“I’m taking care of myself,” Kathy tells Jimmy; “I am not gonna get knocked around ever again,” Clare insists; “We don’t need a man coming in here fighting our battles,” the women say. And that’s all fine, if the movie could support and then elaborate upon these ideas. The Kitchen does not, despite a strong against-type performance from McCarthy, a mixture of wide-eyed naivete and steely resolve from Moss, and a blast of confidence from Haddish. It flirts with Kathy’s feelings of inadequacy, but then turns her into a union-supporting matriarch instead. It pays lip service to Ruby’s feelings of racial disenfranchisement, but then out of nowhere, she’s making plans to run Harlem. The only subplot that really works is the romance between Clare and damaged Vietnam vet and assassin Gabriel (Domhnall Gleeson, thankfully very hot in this), who sees in Clare a great capacity for violence and nurtures it. While Gleeson adds some delightfully gross levity to the film—a scene where he explains to the women how to use various knives to dismember a body, during which Clare listens with rapt, gleeful attention—the movie bungles his introduction. You’ll spend at least the first 10 minutes of Gleeson’s time onscreen wondering, “Wait, who is that guy?” because the script does such a poor job explaining his presence in the story. 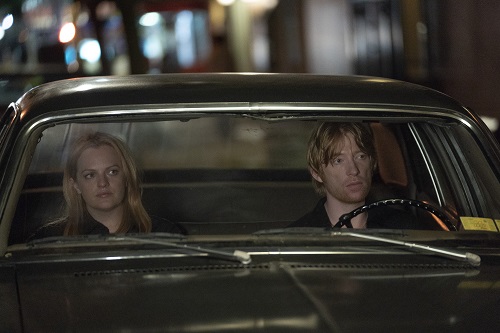 From a style perspective, The Kitchen certainly delivers. The costumes from Sarah Edwards are thoughtful and attention-grabbing; once the women start raking in money, their jewelry and outfits get an appropriate upgrade, and the trio looks great. Cinematographer Maryse Alberti puts together a few scenes evocative of ’70s-era Scorsese, with a griminess that is appropriate to the women’s increasing violence. Although the film relies too much on its soundtrack to set the mood, I will never complain about hearing Fleetwood Mac while watching Gleeson’s loose-limbed, shaggy-haired, sad-eyed Gabriel teach Clare how to get revenge on the men who catcall her one minute and then call her a “fucking bitch” the next. (An experience I’m sure many women can recognize.)

The Kitchen doesn’t deliver the rah-rah feminist energy it so desperately wants to because it can’t quite decide what it’s actually saying about womanhood. Is the issue that men just flat-out don’t respect women? The film doesn’t support that; we see the power Helen commands. Is the issue that women get caught up in the same racial stereotyping as men? The film only introduces that idea in its final 15 or so minutes, when it needs to engineer discord within the trio. Is the issue that women can and should be more than wives and mothers, and that society doesn’t support that? I suppose that’s what The Kitchen is trying to convey, but it muddies its own messaging with its insistence that matriarchal energy is what keeps people happy and that baked cookies brought to mob meetings are a nice touch. In the space of a few minutes of screen time, one character tells Kathy she’s a “criminal” while another tells her she’s a “credit to the community.” Either description could have worked for the women in The Kitchen if the movie put in the work to make any characterizations, plot twists, or narrative jumps believable—which it doesn’t.

← The Case For Ignoring Right-Wing Twitter Trolls | Review: 'Paradise Hills' Offers Stylish Spectacle, Feminist Themes, And Not Much Else →