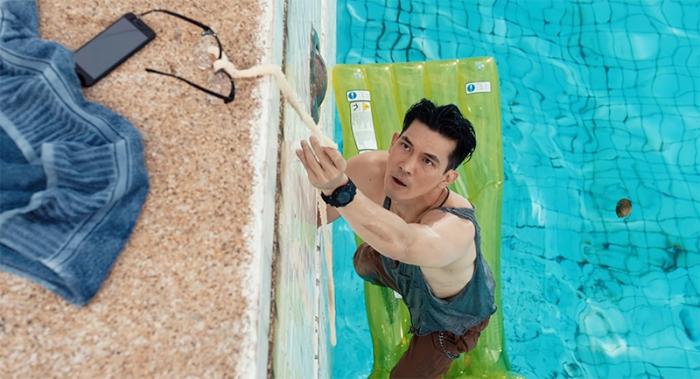 A swimming pool is typically a place of rest and relaxation or fun and frivolity. But not for Day (Theeradej Wongpuapan), the deeply unfortunate hero of the Thai thriller The Pool. After a long day’s work, he took a nap in a precarious place, a raft drifting in the center of a draining 20-foot deep pool. His rude awakening means realizing he’s sunk too deep to reach the ledge. And matters only get worse when his impulsive girlfriend Koi (Ratnamon Ratchiratham) dives in to join him. And then, the crocodile comes.

Written and directed by Ping Lumpraploeng, The Pool unwinds a taut tale of survival with increasingly outrageous twists and a surprisingly shmaltzy core. Lumpraploeng teases the mayhem to come by kicking off in-media-res with Day, dirty and battered, sprawled on the dry tiles of an empty pool. There’s already signs of carnage and patches of dried blood in this sunken setting. And then without warning, there’s the crocodile, savagely chomping on his leg and shaking him like a rag dog. From there, The Pool leaps back to six days before Day first got stuck. His early escape attempts are simple things, like standing on the raft to scramble for the ledge or tying his belt to his eyeglasses to make a grappling hook that might snag his phone from the pool’s rim. But as the days go on and things grow bleaker, he will be pushed to far riskier and far more imaginative means to keep himself and his girl out of the jaws of their pernicious pool mate.

Scenes of Day sparring with a CG croc look a bit wonky because of the subpar visual effects. Still, Fantastic Fest audiences cheered, screamed, and laughed with every ferocious face-off. Lumpraploeng’s single-setting script keeps things fresh by working in jolting new obstacles for his harried hero. This and the poor CG gives the film the fun feel of a Midnight Movie treat. Handsome with a whiff of arrogance, Wongpuapan is a solid action hero and throws himself gamely into every stunt and creature-feature confrontation. But when it comes to the trials and tragedies Day must endure, your mileage may vary to how fun it is. My audience hooted and hollered throughout, and even burst into applause at one particularly shocking blow to Day’s escape plan. Personally, that was the point where these twists turned to diminish returns, feeling more mean than amusing. And for those of you sensitive to animals in peril, be warned: Day has a dog named Lucky, who is anything but.

To his credit, Lumpraploeng tries to balance the schadenfreude fun of his movie with an earnest interest in Day and Koi’s romance. Insecure about his financial standing, Day shrugs off Koi’s none-too-subtle suggestions that they have a kid. His goofing off in the pool is more than a mistake, it begins an irresponsible impulse to avoid his could-be baby-mama. But when she comes crashing back in and reveals she’s already pregnant, Day has to man up. Not only must he get his growing family out alive, but also he must confront his own commitment issues. All of this is treated with sentimentality laid on thick and sickly with swooning flashbacks to less crocodiley times. But perhaps it’s meant ironically? Over the film’s closing credits, an earnest pop song plays as sketches of the characters splash across the screen like the “Take on Me” video. And I was left wondering how seriously Lumpraploeng intended us to take this heartfelt thread.

In the end, The Pool is an undeniably wild ride full of gnarly ingenuity, jolting thrills, and intense sentimentality. It’s the kind of splashy, self-aware B-movie you could imagine seeing on SYFY, starring Ian Ziering. And honestly, I wouldn’t be surprised if we heard word of an American remake before long.

The Pool made its Texas Premiere at Fantastic Fest.