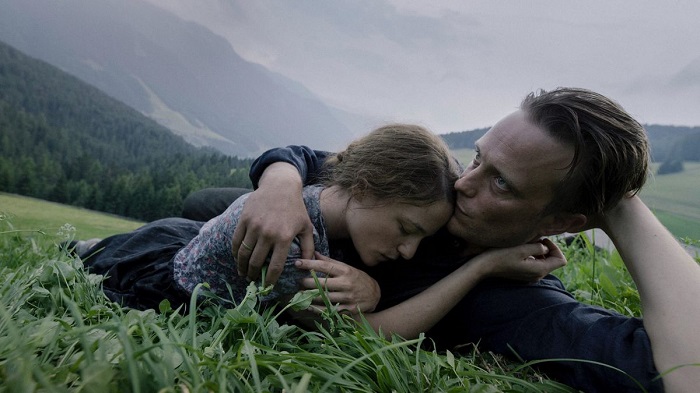 Review: Terrence Malick’s ‘A Hidden Life’ is Another Chapter in the Filmmaker’s Beautiful But Opaque Conversation With God

Has Terrence Malick always been talking to God? From a visual perspective, his films have consistently been unbelievably lush examinations of the world around us, in all its glory and all its decay. A recurring focus is what we do as creatures within this environment—whether we try to control it, as in Days of Heaven, or destroy each other for it, as in The Thin Red Line, or aim to proclaim the righteousness of our place within it, as in The New World. Malick’s The Tree of Life made this desire to connect with a higher power most clear, and sparked off a new wave of creative endeavor from the filmmaker that led to a number of somewhat forgettable efforts—To the Wonder, Knight of Cups—and the magnum opus that is last year’s titanic A Hidden Life.

Visually gorgeous but emotionally distant, A Hidden Life probably means quite a lot to a number of people, but I cannot count myself among them. The performances are passionate, but the narrative tediously repetitive. The message is emotional, but overly drawn out. I am not one of those “ALL MOVIES SHOULD BE 90 MINUTES” people (although, ahem, High Flying Bird is perfect and clocks in at an hour and a half), but Malick’s movie drags out those 174 minutes. He wants us to feel the weight of every single decision made by his protagonist, and I can understand the honor of that. But if you’re not drawn in from the beginning, if you don’t buy into the internal struggle and existential turmoil depicted here, then there’s less and less chance that each subsequent act will interest you.

Malick is working off a real story, that of Austria’s Franz Jägerstätter (played by August Diehl, who you might recognize, ironically, from his role as a Nazi in Quentin Tarantino’s Inglourious Basterds), a conscientious objector during World War II. A Hidden Life begins with a wish from Franz and his wife Fani (Valerie Pachner), who dream to “build our nest high up in the trees, fly away like birds to the mountains.” St. Radegund, Austria, in 1939 is impossibly idyllic and refreshingly simple: Franz and Fani are building a farm together, building a family together, building a life together. Their hands touch in the dirt. They cut wheat side by side. Their town is unbelievably small among these mountains and waterfalls, and Franz and Fani are comfortable within it—within this small community that works the land together and shares the bounty together.

“How simple life was then. It seemed no trouble could reach our valley,” Franz says in a voiceover in typical Malick fashion, but their paradise (that of Franz, Fani, their three children, and Fani’s sister and Franz’s mother, who also live with them) is penetrated, incrementally and then irreversibly, by the coming war. Thanks to the German annexation of Austria in 1938 (quick, remember the timeline of The Sound of Music!), Austrian men were called upon to fight for Nazi Germany’s military. Some of them, like the increasingly fervent citizens in St. Radegund, see this as their national and racial responsibility. The town’s mayor is frenzied by it. These men are delighted to swear an oath of loyalty to Hitler, to pledge themselves—until death—to his cause.

Franz, though, is troubled. His Catholic faith guides so much of his life: his desire to live simply, the sharing of the family’s food and resources with their neighbors and the less fortunate in the town; his sense of companionship and camaraderie. Malick presents their church as a place as beautiful as the mountains: intricate, colorful, seeped with meaning and purpose. And when Franz prays there, or when he walks by a miniature statue of Jesus on the cross that marks the entrance of a graveyard in the village, or when he wanders by himself throughout St. Radegund, looking at the majesty upon him, he can’t make sense of going to war. “Don’t they know evil when they see it?” Franz wonders, but he is a lonely man in his skepticism.

After Franz decides to conscientiously object and refuse to fight, Fani struggles to keep a sense of normalcy—but it becomes impossible after Franz is sent away, after her neighbors become increasingly hostile, and after Franz’s dilemma is noticed by the German forces, who call him to the Third Reich’s Military Tribunal. The film follows the next four years of the family’s life, and it is almost unrelentingly brutal and bleak, and sometimes deeply, exhaustingly repetitive. That’s not to diminish anything about this film’s technical achievement (Bilge Ebiri at Vulture has an excellent piece breaking down how this movie got made) or to undervalue Malick’s return to a more linear narrative, which is welcome after his post-Tree of Life freeform vibe. But watching A Hidden Life feels like both going to church and performing penance, like Malick wants us to submit to the same ideological journey as Franz. And frankly, that particularly religiously structured form might not resonate if you’re not of the same faith.

Malick and cinematographer Jörg Widmer want to place us firmly within the family’s shoes, so the camera whirls around them, almost universally looks up at them, is constantly moving and spinning, framing their faces and capturing every reaction of joy, sadness, or anger. Extremely wide-angle shots establish the beatific nature of St. Radegund, and then increasingly narrow perspectives of the training camp where Franz is abused and the final rooms where he is handed the Third Reich’s judgment transport us alongside him to places defined by their manipulation and corruption. The film switching back and forth, using the narration of letters between the couple to toggle us between their separate locations, is purposefully jarring and oppositional. All of that is effective, and makes clear the many trials Franz is facing: from his friends, from his country, from himself.

Also commendable are Diehl and Pachner, whose performances are elevated when the couple is forced to separate; their reunion after years apart is one of the most impactful scenes of the film. Similarly solid is Franz Rogowski (of the lovely Transit) as a similarly troubled objector to the Nazis who bonds with Diehl’s Franz while in captivity together. And the fact that the score by the absolutely legendary James Newton Howard (responsible for ’90s classics like The Fugitive, Christopher Nolan’s Batman Begins and The Dark Knight alongside Hans Zimmer, and forever favorites Michael Clayton and Nightcrawler) was utterly ignored by any voting awards body last year was a crime. Howard melds natural sounds like chirping birds, flowing water, and the slash and beating of wheat; the work of violinist James Ehnes; and choral singing into a delicately transformative thing that meaningfully accompanies the toil and reward of this life.

Yet for all of the ambition of A Hidden Life, for all the technical qualities I can praise at length, I struggle to feel profoundly moved by a movie that is so obviously intended to do exactly that. “How do you know what is good or bad?” someone asks Franz, and perhaps the flaw with A Hidden Life is that it never truly interrogates that question. We know the Nazis to be bad and reviled, we know Franz to be good and admired, and nearly 3 hours of movie time doesn’t do much to elucidate that dichotomy any further.

A Hidden Life was released by Fox Searchlight Pictures in December 2019, before the studio was bought by Disney and became Searchlight Pictures. The film was made available on March 3, 2020, for VOD rental through your cable provider and for rental on YouTube, Amazon Prime, Vudu, and Google Play.

← Pandemic Productivity: The Strange Pressure to be Publicly Busy During Self-Isolation | What Netflix's 'Tiger King' Left Out About Joe Exotic and Carole Baskin →