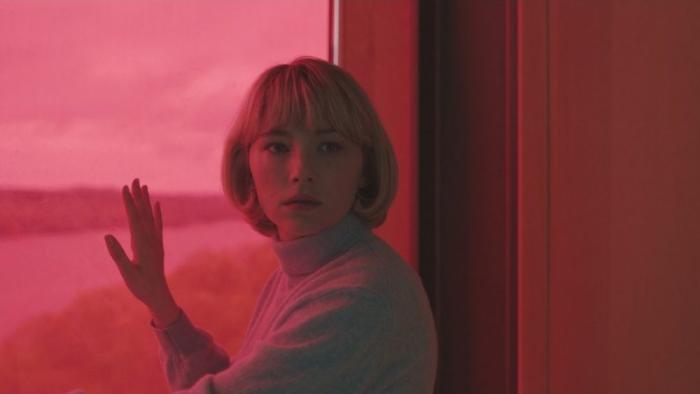 It began with a marble. Shiny, smooth, and round, a perfect bauble to begin a rebellion. All she had to do was pop it in her mouth, past her gleaming white teeth that flash to please whoever is present, onto the tongue trained to proffers pleasant words, and down into the darkness of her gut, where her hidden agony was ravenous. All she had to do was Swallow.

Written and directed by Carlo Mirabella-Davis, Swallow centers on picture-perfect housewife Hunter (Haley Bennett), who seems to have it all: a grand house, a gorgeous husband (Austin Stowell), wealth, beauty, and a baby on the way. In front of her dear hubby Richie, his brilliant co-workers, and her old-money in-laws (Elizabeth Marvel and David Rasche), she is warm, radiant, and uncomplicated. She seems like she stepped out of The Donna Reed Show, wearing a dedicatedly combed bob haircut and’50s-styles a-line skirts, and conservative blouses. Her breathy bubbliness seems carefully copied from blond bombshell Marilyn Monroe. But when Hunter is alone, her smile grows brittle and a searing sadness creeps into her sparkling eyes. She has dedicated herself so completely to being whatever that others want, there is nothing left for her. Her dearth of joy is burrowing a desperate hole inside her heart, and the only thing that fills it is her dangerous secret: She swallows inedible objects.

A marble escalates to a thumbtack then a AA battery. Each gives her a jolt of pleasure as she swallows it down, taking in the texture, the challenge, and in way reclaiming her body and herself as her own. When they come out the other side, she cleans them off and places each on a tray, a kind of trophy rack that celebrates her secret in plain sight…if only anyone was looking.

Hunter’s compulsion is known as Pica, which involves eating non-food objects with no nutritional value. Over the course of the film, we’ll witness Hunter eating pages from a self-help book and fists of dirt. And while these sequences are stomach-quaking, Swallow contains a vibrant empathy for its heroine and her struggle, which comes from this story’s personal origins. In a post-screening Q&A at the film’s Texas Premiere at Fantastic Fest, Mirabella-Davis revealed his film was inspired by his grandmother who had her own battles with mental illness and rituals of control. (Her compulsion was handwashing to the point she’d tear through four bars of soap a day.) You feel his love for her in every frame as Swallow seeks to make us understand why anyone would crave an act so disruptive and self-destructive.

The set design paints Hunter’s life as a gilded cage. The crisp lines of her home demand constant attention to keep suitably tidy. Her outfits harken back to garb of Mirabella-Davis’s grandmother, clothes meant to emphasize femininity without ever veering into sexuality. And even the colors are muted as if too bright a shade might offend the delicate eyes of those who come by to gawk at this pretty bird, coiffed and cared for by her husband’s money. Hunter has no job, no friends of her own, and no identity outside of Richie’s wife. She has no power over her own life until she starts sneaking her dangerous snacks. From there, the look of the film transforms. The red of the marble is almost garish. The close-up shot of the thumbtack feels so sharp it might well puncture her little bubble of domesticity. The sound design amps up every time it involves the sounds inside her mouth, like cracking of ice, the clattering of a needle against a tooth, or the squish of a wet swallow. It’s as if we are inside her head with her. Eventually, even her style shifts as her secret begins to come out.

Bennett, whose been a supporting player in a bunch of movies you might half-remember, is an absolute stunner here. She gracefully shoulders Hunter’s complicated psychology and conflicting desires to please and to break free. She’s a goddamn star, so get on board. With her soft face, she expresses hope, regret, agony, and ecstasy with a nuance that is positively heartbreaking. It’s the blink-and-you’ll miss it flash of anxiety across her countenance as her in-laws barrel over her contribution to dinner conversation. It’s the flickering smile plastered on when surprised by a boundary-pushing party guest. It’s the soft hum of pleasure as the marble slides down her throat with an audible gulp. Her vulnerability invites us in, while Hunter’s story combined with Mirabella-Davis’s tactile cinematography invites us to squirm. And so we share in Hunter’s fragile joys and her enveloping unease.

Remarkably, in spite of its exploration of isolation, mental illness, and bodily harm, Swallow is a dedicatedly funny movie. Grounded in Hunter’s perspective, the world around her seems inherently absurd, with characters cartoonish in their righteous privilege, etiquette cringe-inducing in its inhumanity, and small talk like “I love diets!” And all of this keenly enhances the horror that creeps at the story’s core. Because in such a glossy world, everyone is pretending. Beneath the polished veneers, there are dirty secrets. And as Swallow exposes Hunter’s, the world around her cracks in ways frightening and exhilarating, leading to a conclusion that thoughtful, thought-provoking, and unforgettable.

By blending dark humor and unnerving visuals to explore the story of female experience through self-destructive rebellion, Swallow feels like a sister film to two of my personal favorites, David Wnendt’s sickening coming-of-age comedy Wetlands and Agnieszka Smoczynska’s psychological satire Fugue. Yet Mirabella-Davis charts a course all his own, by breaking his heroine out of the movie’s initial theatricality to reflect her personal evolution. In doing so, he’s created a film that is alive with humor, horror, and humanity, and positively punctured with surprises. As such, it’s easily one of my absolute favorites of the year.

Even if you fear you can’t stomach it. Take a chance on Swallow. 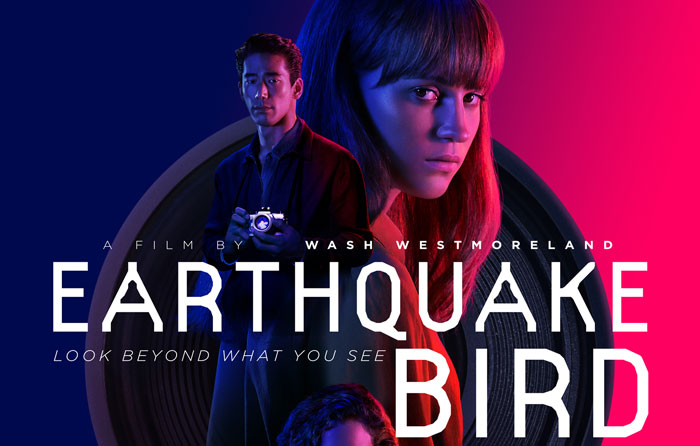 Color Us Thrilled: Alicia Vikander And Riley Keough Mix It Up In 'Earthquake Bird' Trailer