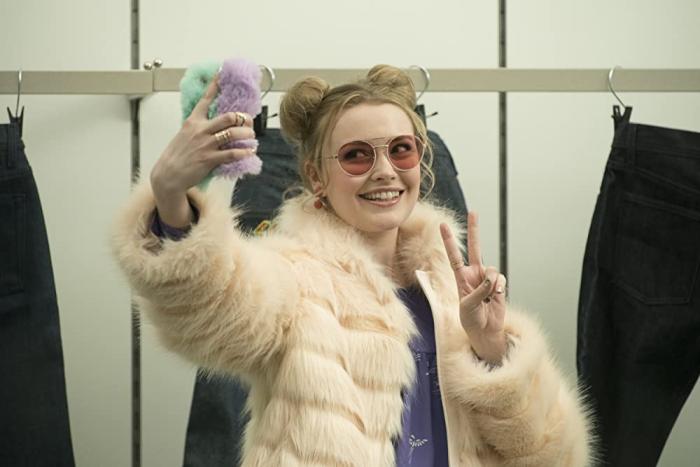 To-die-for fashion is taken to its literal extreme in Slaxx, an indie horror-comedy about jeans that kill.

Directed by Elza Kephart, Slaxx centers on the flagship store of a cool clothing company, that’s brand is all about being chic AND sustainable! That’s why plucky Libby (Slut in A Good Way’s Romane Denis) is dying to work there. Her first day is marked with faux pas that make her look a fool before the snobby staff. But she hopes to shine on the overnight shift, helping re-dress the place for the rollout of some top-secret denim with Super Shaper tummy-taming technology! To keep this new look from leaking, management not only shuts off WIFI and cell service, but also locks everyone in for the night. So, when a pair of slaughtering slacks start dropping bodies like last season’s line, its human prey will have to endure until store hours to escape.

Kephart co-wrote the screenplay with Patricia Gomez, both pulling inspiration from crappy jobs in offices and retail. As a former employee of a certain normie shopping mainstay, I can confidently tell you they nailed the lingo, the clique culture, and the eye-rolling smugness of elder employees. But most importantly, these sharp screenwriters eviscerate the fast fashion industry through silly and slaughter-filled satire. The sparkling ensemble delivers performances that are thoughtfully broad, creating caricatures of vapid fashionistas, snarling shop girls, catty shopboys, and the robotic manager, whose starched smile is a requisite of his uniform. Amid all this, Libby is the wide-eye ingenue, eager to get cool clothes (with an employee discount), while contributing to a corporation that cares about the planet and people over profit! However, as Libby and her snarky co-worker Shruthi (Sehar Bhojani) begin to uncover the motive of these killer jeans, she also unearths the horrid lies about her new employer.

We’re dipping into third-act stuff. So, to avoid spoilers and not rob Slaxx of its surprises, I’ll just say that Kephart goes for the jugular, condemning fast fashion and consumerism with equal bloodlust. It makes for a finale that is wild, and perfectly fitting.

Beyond the political edge, Slaxx is madcap romp slicked with gore. Following the slasher model, Kephart and Gomez introduce the stalking garment against a backdrop of clueless and decadent youth. One by one, the jeans pick off a victim from the pack, killing them in a way spectacular yet well suited to the possibilities of possessed pants. A clever effects team makes a puppet of specially designed denim (that actually are ethically made). The waist becomes a mugging maw that can bite and smirk. The legs can be brought to life to strangle or dance. Remarkably, the jeans become much more than an outrageous prop, they reflect a popping personality that scratches at the secret of their origin.

This leads to final act that offers surprising pathos, which is grounded by Denis and Bhojani. Over the night, Libby is forced to grow up fast, facing not only bad britches but also scorching disillusionment. As for Shruthi, she seems to have survived working in this soulless altar to superficiality by drawing inward (and into her headphones music). But to survive the night, she has to open up, so that she and Libby join forces against a remorseless evil.

All this makes for a film that is on its surface silly, but slyly sophisticated. If you’re looking for a bonkers flick to kick back to after a long week, then I recommend this kooky comedy about terrifying trousers that drink blood. If you’re seeking something smart and boldly irreverent, then I recommend this superb slasher satire rich with commentary and a keen wit.

Simply puts, Slaxx is stylish, sharp, and not to be overlooked.

Slaxx is now on Shudder.

← Spoilers: Season Two of 'Servant' Pivots, Setting Up a War In Season 3 | We're Getting More Of 'The Amber Ruffin Show'! →