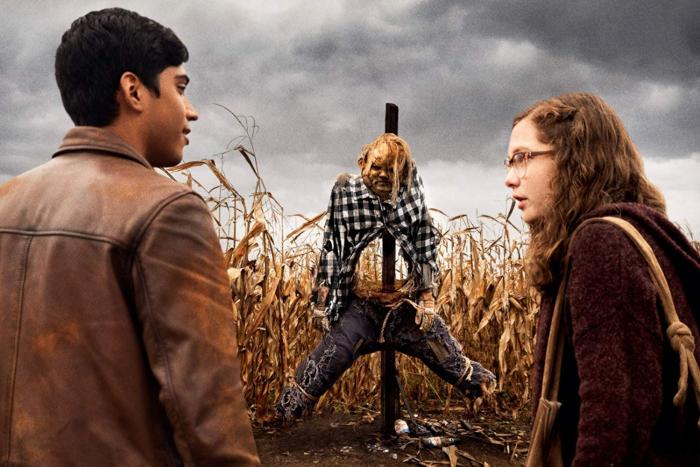 Review: 'Scary Stories To Tell In The Dark' Is Even Better Than I Dared Hope

Nearly 40 years after it first hit bookshelves, Scary Stories To Tell In The Dark is finally coming to theaters with an adaptation created by heralded horror-makers. Produced by Guillermo del Toro (Pan’s Labyrinth, The Shape of Water, Crimson Peak) and helmed by André Øvredal (Trollhunter, The Autopsy of Jane Doe), the movie brings to life some of the most memorable bits of folklore collected in the horror anthology for kids written by Alvin Schwartz and illustrated by Stephen Gammell. For children of the ’80s and ’90s, Schwartz and Gammell’s collaborations were coveted treasures, dark fascinations, and gleeful dares. The kids in my class passed them around like contraband, fearful that if our parents looked inside, these creepy books would sure be snatched away. That made the scares all the sweeter, the feeling they were forbidden. For many grown horror fans, these books were a touchstone of terror. They were for me, which made finally sitting down to see this much-anticipated adaptation a mix of exciting and anxiety-inducing. The source material plus the filmmakers attached should mean it would be outstanding. But what if it’s not? It’s with great joy and relief I inform you, Scary Stories To Tell In The Dark is a stupendous horror movie, and not just for kids.

One of the major obstacles the filmmakers had in adapting Scary Stories To Tell In The Dark is that these books don’t have main characters. They are a collection of folklore, with some stories just a few paragraphs long. The script by Dan Hageman & Kevin Hageman creates a clever framework to introduce these scary short stories.

It’s the Halloween of 1968 in Mills Valley, Pennsylvania, where local misfit Stella Nicholls (Zoe Margaret Colletti) is taking a break from scribbling creepy tales in her room to go trick-r-treating with her friends, esoteric Auggie Hilderbrandt (Gabriel Rush), trouble-seeker Chuck Steinberg (Austin Zajur), and new-to-town Ramon (Michael Garza). Their night of fun turns foul when they prank vicious jock Tommy (Austin Abrams) with a “poop d’etat.” The teens flee to the abandoned Bellows mansion, which is rumored to be haunted by the vengeful ghost of an ostracized heiress. In this spooky setting, Stella relishes in sharing the lore of Sarah Bellows, who was locked in the basement by her upper-crusty family and whispered stories through a crack in its wall to children, who later died from a so-called curse. When Stella stumbles across Sarah’s infamous book of scary stories, strange things begin to happen in Mills Valley, strange things lovers of Schwartz’s book will recognize, including, “The Red Spot,” “The Dream,” and “Harold.” As Sarah’s horrific tales come alive, Stella and her friends must unlock the mystery of this furious ghost’s motivations before they are all written out of the story for good!

Schwartz’s stories are embedded within this frame and given slight tweaks, but their themes and imagery stay faithful. Øvredal’s production design respects the use of shadows and lines of Gammell’s haunting illustrations. For example, the film’s Pale Lady is plucked from a drawing of a shapeless woman with deadly pale skin, dark, beady eyes, and long, stringy, black hair. Gammell’s use of contrast blurs the line between flesh and cloth, and even face and neck. The woman in his illustration seems a gruesome ghoul that’s half-woman/half-potato. In the film, the ambiguity of the contrast is reimagined with unnerving texture. As the Pale Lady stalks her victim, she seems at first naked, the color of her flesh not a solid white, but mottled blotches of white, pale pinks, and sickly blues. Over it, the thinnest wisp of a gown, as if it’s the ghost of a hospital gown clinging to a nightmare of fouled flesh. Crawling from her scalp is hair dark and coarse like spiders’ legs. As she comes ever closer—no matter where our hero tries to run—her face, a smear of mocking features, maintains a smile, wide and thin like the crack on a wall or the slice of a throat.

I’d feared the ambiguity of Gammell’s pencil work, which haunted a child’s brain who couldn’t easily label the horror they evoked, would be ruined by hard lines of practical effects of CGI, but Øvredal knows how to bring lore and illustrations to life. It’s what he did to rapturous effect in Trollhunter, a masterful movie I compared sincerely to Jurassic Park in its adventure, world-building, and thrills. With Scary Stories To Tell In The Dark, the Norwegian director takes the inspirations of Gammell’s sketches and pushes them into something more terrifying by giving them flesh, texture, and weight. The sketch of a spooky scarecrow called Harold is even more unnerving here, his plump belly scratched out into a gaping hole that shows the post behind him that holds him in place. His face, a festered mask with hollow eyes, has no signs of life save for the maggots that make his cheeks their playground. The violence he’ll enact is different from the rooftop tannery scene of the books, but is still deliciously terrifying, while being better suited to the film’s PG-13 rating.

Beyond the look, Øvredal stays true to the fears that lie at the center of these stories. Though some details have changed, “Harold” is still about bullying. “The Red Spot” is still an analogy for a young woman’s fear of her changing body. Around that, the film’s frame explores why we need these stories. Stella is a girl who loves horror. Her room is covered in posters of monsters. She has stacks of creepy comics and can quote Night of the Living Dead by heart. But horror is not just fiction for her, even before the rise of Sarah Bellows. Her family has been shattered by personal tragedy. The world around her is one rife with violence, bullying, and bigotry. TV news reports blare about newly elected President Nixon, while radio talk show hosts lament the atrocity that is sending American sons overseas to die in the Vietnam War. Scary stories don’t make Stella afraid, they give her a place to work out her fears. In that, there is power. Even as Sarah’s curse rips her friends away one by one, Stella strives not to just be the subject of a scary story (or cautionary tale) and instead be the hero of her story and the writer of her own. This lesson feeds into the film’s climax, which is not only delectably suspenseful and scary but also surprisingly cathartic. But this is not her story alone, she shares it with Ramon, who has a distinctly James Dean vibe.

In a thread that feels achingly timely, Ramon is the reason the kids can’t seek help from the cops, who are unambiguously racist. A Latin-American stranger rolling through this very white town in a nice ride, Ramon is immediately suspicious to surly Chief Turner (Gil Bellows), who asks pointedly what he’s doing in these parts. Ramon says “following the harvest,” which is a lie, and one he knows a racist cop will believe. Ramon faces further prejudice, being asked if he carries a switchblade and being labeled with the slur “wetback.” So when kids start going missing, Ramon knows the cops will see him not as a victim or witness but as a suspect. These everyday horrors blend with American hypocrisy when Ramon reveals his harrowing backstory, which then feeds into a sequence that’s terrifying not only because of its jaw-dropping visuals but also because of what his ruthless nightmare represents.

My fear for Scary Stories To Tell In The Dark was that some studio would slap the name on, do a cheap anthology that plays heavy to nostalgia but skimps on understanding, and call it a day. I should have known del Toro and Øvredal would never settle for that. Instead, they created the perfect adaptation for Scary Stories To Tell In The Dark. The film not only pays loving tribute to the work of Schwartz and Stephen Gammell in its themes and look, but also explores the power of horror and storytelling through a plotline that’s poignant and engaging. And the cast is spectacular, bringing plenty of charm and heart to every beat, be it silly or scary. Along the way of that, Øvredal offers one set piece after another that is divinely exhilarating in suspense and scares! I know it’s a cliché to say “I felt like a kid again!” But truly, I FELT LIKE A KID AGAIN!

Øvredal realizes that part of the fun of these stories is the familiarity found in folklore. We know the beats. We love the rhythm. And he knows how to play it to drive us to frenzy and screams. It’s the tension in a finger poking at a red spot growing bigger by the second. It’s the sharp click of a locked door unlatching or the sickly pleasure of a big, gross toe plopping to the top of a murky bowl of stew. These are those moments before, when you bite your lip, hide your eyes, and feel goosebumps shivering down your spine. Then, comes the scare and cacophonic relief! Oh, the tremulous freedom of screaming in a theater! The fun of being surrounded by grown-ups reduced to giggles, groans, and screams! The lot of us became kids again, giddy over the pleasures of being told scary stories in the dark.

← Review: Bruce Spingsteen Musical 'Blinded By The Light' Is A Delight | Trailer for 'Zeroville' Sees a Return for Writer/Director James Franco →