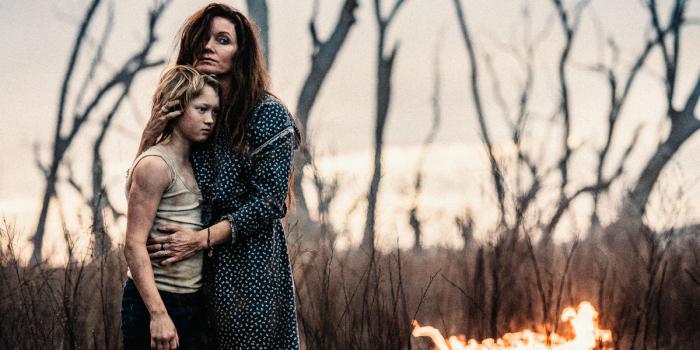 If you’re an American, you may not know the tale of Australian outlaw Ned Kelly, a cop-killer and gang leader who became a folk hero among the Irishmen subjugated by the colonizing English. Well, don’t expect True History of the Kelly Gang to educate you, as the first thing to hit the screen is the disclaimer: “Nothing you’re about to see is true.”

Forget the facts of Ned Kelly and his crimes. Based on the novel by Peter Carey, True History of the Kelly Gang envisions the Bushranger as a boogieman created by the evils of colonialism. For it is the shipping of Irish convicts to this far-flung colony that forged a class of indentured servants who were too often pushed to scrape, thieve, and sell themselves to survive. On a miserable plot of dry dirt, 12-year-old Ned Kelly watches helplessly as a callous sergeant (Charlie Hunnam) beds his mother so she might buy their daily bread. The boy snarls at his deadbeat dad who is drunk more than he is useful. He warms to burly, bearded rogue Harry Power (Russell Crowe), who charms all the Kelly kids with a song about constables being “cunsts.” Each of these men shapes Ned’s view of masculinity, the world and his future in it, but no one shapes him so much as his beloved and loathed mother.

Essie Davis, who wowed critics with her soul-rattling performance in The Babadook, plays Ned’s mother as the Lady Macbeth of True History of the Kelly Gang. With a rat’s nest of hair, a wary eye, and a scowl that can make grown men tremble like children, she is a force to be reckoned with, a steely survivor who will raise her boys to be the same. And this means hard lessons for Ned, chief among them that the English are better marks than allies. Still, Ned will be slow to learn this, daring to trust a cunning constable (Nicholas Hoult) he meets at a brothel.

Over the course of the film, Ned grows from a wide-eyed boy (Orlando Schwerdt) to a furious young man (George MacKay), who shies away from violence but is pushed to it again and again. True History of the Kelly Gang takes pains to show how the English devastate the Irish in Australia. The soldiers and coppers will murder, ravage, and ruthlessly tear apart families as they please. Even the kind-hearted offer their own damage, like a lady who asks to send Ned to a “proper” school. To his mother, this means stripping away the boy’s culture. She rejects with a bawdy retort that earns spit in her face, an indignity young Ned witnesses with a proud grin. According to Ma Kelly, to play by the rules of these oppressors is to lose. The film gives Ned a win by offering the opportunity to reclaim his story as one of rebellion and tragedy. For only if England had not been so rough with him, he’d not have had to be the return of their oppressed.

This theme made me think of Jennifer Kent’s The Nightingale, which is also a dark drama about the trauma inflicted and inspired by the English colonialism of Australia. True History of the Kelly Gang suffers by comparison, chiefly because the former is built on two ruthlessly riveting lead performances (Aisling Franciosi and Baykali Ganambarr). Though the latter is studded with fascinating performances, it is sadly centered around a dud. Handsome, lean, and stern, MacKay looks the part of a leading man, but he can’t rise to the level of the character actors around him. They dazzle while he fizzles.

On the bleak landscape of Ned’s childhood, Crowe’s Power sparks like a wildfire. The pomposity of Hunnam’s bullying soldier wilts as a pipe-smoking Crowe tells him in a blasé grumble, “Fuck off.” When he sings dirty ditties to amuse the Kelly kids, Crowe is so charmingly chipper—and a bit unhinged—you may want to sing along. When he softly speaks on how he’d like to taste their mother’s “lamb…pink…tender,” you may well blush. But the grumble is a lit wick. The song and flirtation the sizzle to the dynamite. Its explosion will be sweaty, swear-filled and sensational, leaving Crowe red-faced and us breathless.

Another captivating villain comes along in the second act, and Hoult makes a feast of this beguiling fiend. As in The Favourite, he’s well cast as a posh English scoundrel. His proper boy looks make him seem no danger, adding an extra film of sinister to his smarmy glances and sly remarks. Stripped of the dandy finery and sharp cuss words, he’s nonetheless intriguing, plying promises with professional favors and pretty dresses. Most remarkably, he can hold the room whether paying the courting gentleman, cracking crab claws with his bare hands, holding a loaded pistol to a wailing baby’s plump belly, or lounging naked—save for socks and their garters—while leisurely lecturing on the pleasures of fucking in drag. He is an outrageous yet precise vision of villainy, giving a satisfyingly smug face to colonialism and Kelly’s fury.

The heavyweight here is Davis, who is savage in scenes tragic and tender. She is a mother so ferocious in her love that she’s damn near feral. She lashes out viciously at those who threaten her brood and clutches a defiant Ned by the scruff of his neck. His hair spiking out between her white knuckles and she growls a message of menace and loyalty. There’s dirt under her nails, fire in her eyes, and blood on her hands. She is monstrous, motherly and majestic. In one exhilarating scene, she and Hoult face off in a vicious and powerful showdown so kinetic it pulled me to the edge of my seat.

The boy Ned is chiefly asked to look angry or shocked as he faces one affront after another. Schwerdt does a fine job of playing this wounded witness to wickedness. But when things pick up with MacKay, Ned falls flat. He is reintroduced with anachronistic punk music blaring over him as he flexes under a Union Jack before bare-knuckle brawling for the amusement of wealthy spectators. Throughout the film, poetic voiceover stitches together a plot that meanders and rambles. More importantly, this narration brings depth that MacKay’s onscreen performance cannot. Whether caked in blood, caged by a lace dress meant to make him look “crazy,” or clad in self-made iron armor, MacKay lacks the electrifying menace or combustible bravado of his costars. He never feels truly dangerous, so this story of an outlaw who outraged and inspired never really comes alive. And so the film feels without focus, as what should be its center of gravity can’t match the power of its true stars. In short, a grimace does not a compelling anti-hero make. And MacKay offers little else.

← AMC Theaters Maps Out Its Summer Future As the Industry Undergoes Rapid Change | The Stupid Conspiracy Theory About Bill Gates and the Mark of the Beast, Explained →