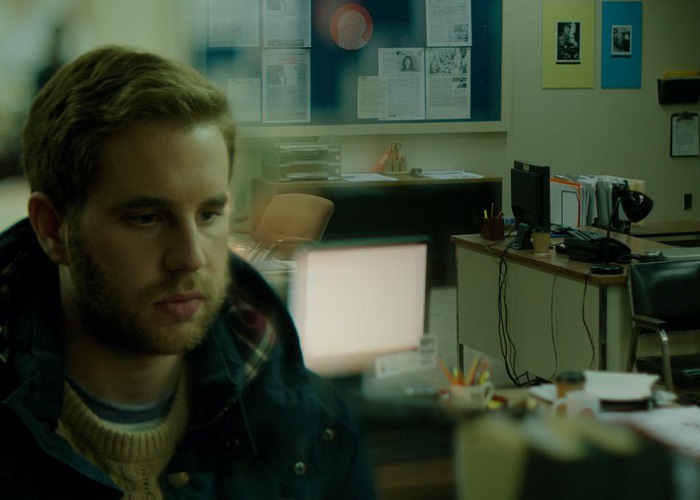 Back in April 2018, when casting details for Run This Town were finalized, they caused a minor outrage online: It seemed like writer and director Ricky Tollman’s film, in casting Ben Platt as a young journalist investigating the darker side of Toronto Mayor Rob Ford, was rewriting history.

I'm glad they're rewriting the fact that it was a female reporter who investigated Rob Ford. Why have a woman be a lead character when a man could do it? Ammaright? https://t.co/Nx3holhuZW

Do you remember this? Platt stepped in with an explanation that he was playing a fictional character and an apology to Doolittle, who covered the Ford story while working for the Toronto Star and wrote the biography Crazy Town: The Rob Ford Story. I won’t link to Platt’s Tweet because his statement actually gives away a major plot component of the film. But it’s interesting to think about that kerfuffle after seeing Run This Town, because Platt’s character isn’t a distraction or a detriment in it. Instead, that distinction goes to Damian Lewis, who plays the now-passed mayor.

Run This Town is a film about the last year or so of Ford’s tenure, and yet Ford—played here by Lewis under heavy padding (read: a fat suit, a term I wish we could find a replacement for in this industry) and prosthetics—is pretty much the most unnecessary part of this story. He is waddling and plastic-faced, and not in the intimidating way the film intends. The fear that the character is supposed to inspire in his young employees and in us as the audience never quite lands—which is unfortunate, given that the script gets so much else about Millennial rage and dissatisfaction quite right, and the other performances are so pitch-perfect, and the score from hip-hop producers Ali Shaheed Muhammad and Adrian Younge is so propulsive and tense.

Run This Town tells three stories at once. The first is that of young journalist Bram (Platt), who just graduated, won some reporting awards in college, and takes an entry-level job with The Record newspaper. He wants to do hard-hitting investigative work but is instead assigned to do top-10 lists, and although using the newspaper’s expense account to sample brunch and sausage spots all over the city is nice at first, after a year, he’s anxious to prove himself. And his parents, who nip at his heels nearly every night, who ask why he isn’t dating someone or hasn’t bought a house yet, who tell him he’s settling for this job, who have no understanding of how difficult everything is for his generation, aren’t making his transition to the professional world any easier.

Also struggling are members of Ford’s staff, all similarly aged, all disillusioned after years of expensive education—law school, business school, graduate school—and carrying mounds of student debt. They’re fast-talkers, former high school debate team members who bring out those skills while drinking in the office after work, challenging each other and sleeping with each other and trying to battle cynicism about their jobs. Kamal (Mena Massoud, our upcoming Aladdin), Ford’s highest-ranking staff member and special assistant, is supporting his grandmother with his salary, while communications manager Ashley (Nina Dobrev) accepted her position after realizing that graduating from law school didn’t immediately materialize in a law firm job. Kamal is loyal to Ford, although the mayor pronounces his name like “Camel” and insults immigrants as a whole by saying Kamal is a “good one,” while Ashley is more interested in holding onto a job than working for Ford in particular.

Their paths soon cross with Bram’s when the journalist receives a call from someone looking to sell information about Ford, kicking off a series of events that draws other people into the situation, from Bram’s no-nonsense editors (Scott Speedman and Jennifer Ehle, both very good) to a couple of police detectives (Gil Bellows and Hamza Haq) to the men scoping around for a payday (Emmanuel Kabongo and Dennis Nimoh Jr.). Tollman moves fluidly between these narratives, splitting the screen up into halves and thirds (think of Steven Soderbergh’s approach in the Ocean’s films), showing us the characters as they struggle to keep up with Ford, whose entire vibe could be described as “gross.”

Believable revulsion toward Lewis’s Ford is integral to Run This Town, but without it, the character arcs that revolve around him suffer. Massoud’s Kamal and Dobrev’s Ashley each spend time with Ford, but while their performances are realistic and grounded, Lewis is too much of a distraction. We’re supposed to journey alongside them as they take in everything Ford has done, but the movie doesn’t quite sell us a presentation of the man who would ever be respectable or likable in the first place. Dobrev in particular has a fantastically expressive scene in which she reacts to sexual harassment with both disgust and shock, but the fundamental unevenness of the film, how it presents Ford and how Lewis acts the character, can’t be overcome.

And what else is uneven is how well the film captures Millennial malaise, frustration, and rage. Tollman has created a talky, detail-heavy script that relies on a variety of clues to demonstrate to us how desperate these young people are, how disaffected, how utterly burned by the system they were told to trust their whole lives. They did everything they were told, they did well, and they graduated into a depressed job market with an avalanche of debt, with parents who benefited from generational wealth and high-paying careers and who don’t understand how drastically different everything is from when they were young. Those parts of Run This Town are simultaneously on-the-nose and great, obvious but also cathartic. But they fail to fully integrate with the Ford storyline, and so Run This Town ultimately feels quite disparate—an amalgamation of mostly solid performances, often insightful writing, and the casting of Damian Lewis sticking out like a sore thumb.

Run This Town is currently in limited release.