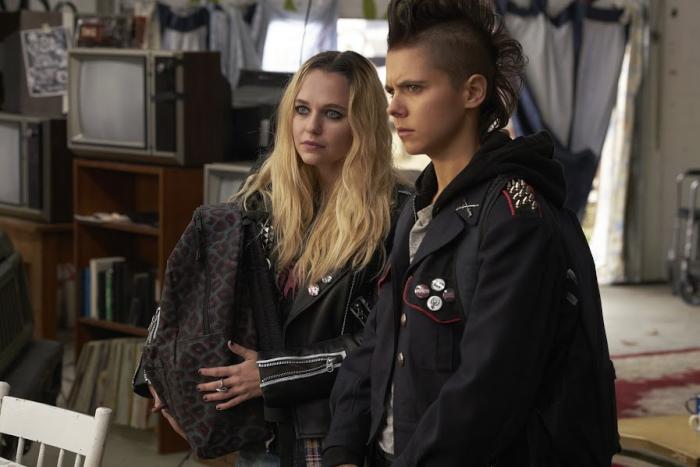 With a slew of allusions to ’80s genre cinema, Riot Girls aims to reclaim the post-apocalypse for queer girls with attitude. Written by Katherine Collins and directed by Jovanka Vuckovic, Riot Girls is set in a world where all the grown-ups died off from a gut-twisting plague, leaving their orphaned children to fend for themselves. In one small town, that has led to harsh divisions across class lines. On the West Side of the bridge, the wealthy kids with names like Brad, Todd, and Jeremy reign. Relying on the hierarchies most familiar to them, a patriarchal structure of privilege and conformity is maintained by bullying jocks. Their high school becomes a fortress and a prison, where those who don’t conform will be forced into uniforms (school-logoed gym clothes) and sanitation work relabeled as “detention.” Meanwhile, the petty tyrant Jeremy (Munro Chambers) rules with an iron fist, bolstered by an army of varsity jacket-wearing jocks and instilling fear with psycho pep rallies that serve as a venue for public executions. Under him, the school mascot of the Titans has become their tribe name and fearsome edict.

Across town, the East siders scrape by with far less, scrounging for water, batteries, and food by foraging the homes of the dead. There are no meticulously groomed lawns, no uniforms, and very few rules here. Instead, a small community of orphans is led by Jack (Alexandre Bourgeois), a sort-of teen Robin Hood who steals from the haves to give to his have-nots. In a warehouse, the kids carve out their own space with stolen decorations and salvaged luxuries, while Jack stalks the back roads to intercept supply runs from the West Side. Not everything is about survival. Jack’s sister Nat (Madison Iseman) and her friend Scratch (Paloma Kwiatkowski) find time in scavenging to have some fun through graffiti and caring for a lost puppy. But such frivolity screeches to a horrid halt when Jack is abducted by the Titans. Now, Scratch and Nat must team up with runaway West sider called Sony (Ajay Friese) to save Nat’s brother before it’s too late.

Riot Girls feels like a scrappy little sister to Cold War-era kids movies where teens are left to their own devices to make sense of very adult problems, including the end of the world as we know it. Despite this darkness, it’s fun to spot the allusions. For instance, a Titan training student in martial arts ferociously directs them to “sweep the leg!” Which is a nod to The Karate Kid. It’s no coincidence then that their instructor Todd seems like the love child between the Cobra Kai’s Johnny Lawrence and Top Gun-era Val Kilmer, with a sharp blond mullet and a performance that draws a lot of attention to his chopping teeth. As for the Eastside, Jack—with his longish locks and tough but sensitive vibe—recalls the late River Phoenix, who played bad boy with a heart of gold with a breathtaking intensity. The film’s quest has shades of Red Dawn, The Goonies, and Stand By Me. The satirizing of high school cliques gone wild seems a nod to Heathers, Cry Baby or maybe it’s Degrassi High gone feral. All of this makes Riot Girls feel strangely cozy even amid its mayhem. 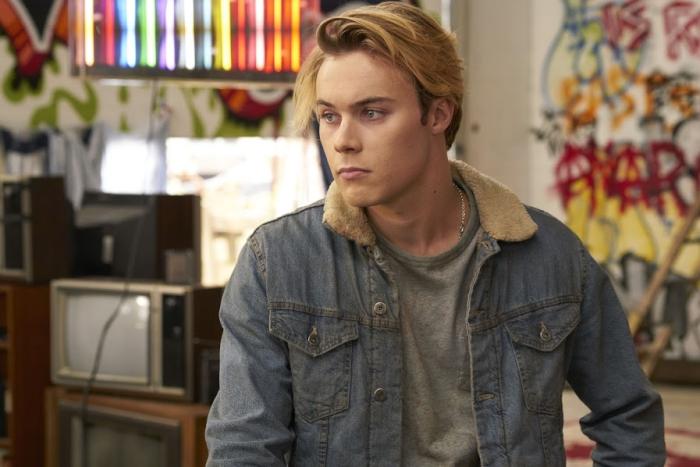 But our heroines Nat and Scratch fit outside this ’80s aesthetic, leaning more into the early ’90s look of the riot grrls. Nat’s shaggy unwashed hair, leather jacket, and smudged eyeliner give her a rougher edge than the girls of the West Side. She’s femme and ferocious, while Scratch is more butch, rejecting makeup while favoring a boxy military jacket and a mohawk. The teen girls are basically attached at the hip, each other’s ride-or-dies. They not only go foraging together, but also share a bed and a puppy. Yet there’s an arguable ambiguity in the first act about whether the girls’ relationship is strictly platonic or edging into romantic. Later, a fight spurs a furious Nat to shout, “You’re not my boyfriend,” wounding Scratch. But amid crossing enemy lines, plunging into a rescue mission, and surviving the apocalypse, queer love will blossom. The heroine(s) will get the girl.

Riot Girls’ nostalgic vibe, crackling characters, and end-of-the-world building are intriguing. Unfortunately, its dialogue lets both down. Perhaps intended to sound spontaneous or as a throwback to ’80s cinema, the kids in Riot Girls curse a lot. It seems every other line contains the word “f*ck.” While I’m a liberal f-bomb tosser, there’s a point where use of that word tips from powerful to pathetic or just white noise. This does no favors to the young ensemble, some whose performances are pretty rough around the edges as is.

Still, with a sharp stare and tight-knit lips, Kwiatkowski has a spark to her surly presence. Blending tenderness and tenacity, Iseman’s well-cast as a teen princess of post-apocalypse, and Bourgeois’s boyish beauty combined with a soft melancholy plays well. But Chambers is the standout. Playing Jeremy as a high-strung megalomaniac with a real hard-on for school pride, Chambers channels a volatile energy that makes his villain seem the long-lost son of one of Gary Oldman’s most unhinged baddies. Chambers is chewing the scenery to slobbery pulp, which makes for bloody good fun. 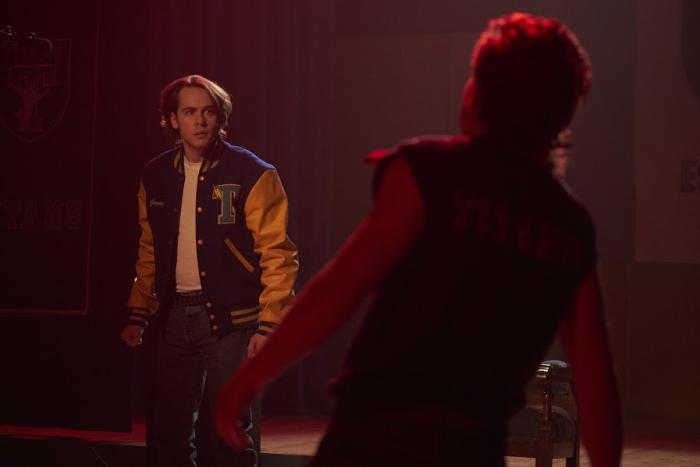 In the end, Riot Girls is a pastiche that is spirited if a bit sloppy. Still, it was an enthralling adventure, in part because of its covert mission. With its deeply ’80s vibe, Collins and Vuckovic brazenly carve out a spot in the kid-adventure movies of the era to make room for out-and-proud queer girls. The filmmakers make them the heroines, make no apologies, and in that make something pretty special.

Riot Girls screened Fantasia International Film Festival on July 28, days after its World Premiere at Outfest. It arrives in theaters and On Demand on September 13th.