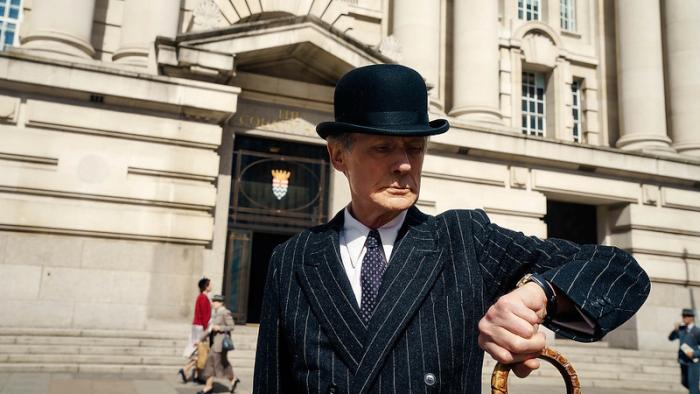 Sundance Review: Pop The Champagne Because Bill Nighy's Giving The Performance Of His Life in 'Living'

I suppose that mid-January might be a little early in the calendar year to say I have just seen my favorite performance of 2022, but 2022 is going to have to bring it if it is thinking about unseating Bill Nighy’s extraordinary career-best work in Living. Did I just say “career-best” for an actor who’s been working for a full half-century? I did and you’d best believe it. In a remake of Akira Kurosawa’s 1952 masterpiece Ikiru, no less—director Oliver Hermanus (who gave us the fine gay solider drama Moffie last year) and screenwriter Kazuo Ishiguro (yes THAT Kazuo Ishiguro, Nobel-prize winning author of The Remains of the Day and Never Let Me Go) really shot for the moon with Living, and as far as I’m concerned the moon they acquired. What a glorious and moving motion picture experience this is.

Transferred from the post-WWII Japan of Kurosawa’s film to post-war London, the victors might get the spoils but Ishiguro, who was born in Japan and moved to the UK at the age of five, knows people everywhere aren’t so different, spoiled or not. General humanity aside, there is something culturally complementary with regards to the Japanese and the British people in particular—the same reserve permeates both societies, the same lean-into stoicism and stiff upper lips in the face of emotional flamboyance. Ikiru’s story of a closed-off government bureaucrat who becomes a changed man after discovering he only has a few months to live could probably work anywhere at any time, but this relocation not only makes that broad kind of sense—it also, as a bookend to the opposing side of the defining circumstance of the 20th century, feels in direct communication with the original film in more meaningful ways.

Mr. Williams (Nighy), we find out, has been a shell of a person for two decades since his beloved wife died. He rides the train every morning into London, a bombed-out city still being rebuilt after the war’s devastation, and there he sits in a compartment by himself even though there’s a car-full of his co-workers just down the way. We see how his routine shapes the behavior of all around him—arriving at the office simultaneously while everyone else slides out of his way, allowing him several steps before even thinking of falling in line. And then, with a swiftness, they departiculate into a parade of identical hats and suits, one straight after the other. Hermanus shoots these drone movements against the gray brick and green counters of mid-century like dance; it’s the perfect choreography of the damned to do it every day for as long as they can recall.

At the government office, everyone pushes around their papers, crossing dots and teeing lines, accomplishing nothing besides the killing of hours. A group of well-meaning local ladies come in who are trying to turn a still-ruined stretch of city-block into a playground for children and, alongside the new kid in the office Peter (Alex Sharp), we follow for a patch their Kafka-esque charade up and down the halls and labyrinthine floors of the building as they just try to get someone somewhere to speak to them proper about it. It’s a stab at madness, attempting to navigate this byzantine bureaucracy, and Mr. Williams is a perfect mid-sized cog in the machine, and satisfied to be so.

Then one day, a change (the first of many)—Mr. Williams alerts his underlings that he’ll be leaving the office early, which everyone somewhat hilariously greets like a slap in the face. Turns out it’s that fateful doctor’s appointment where he learns that fateful news—he’s got months to live, and as it would to any person Mr. Williams is sent reeling. Not that Nighy over-plays it—his unshowy work, expertly maneuvered, remains so dialed back and oft-closed-off you become tuned into the slightest shifts in temperature; he makes you lean in so close you begin noticing half- and quarter-degrees. All the better to devastate you when the time comes for devastation, of course. And come does it ever. (I admit here that I left both of my screenings of this film an utter sobbing disaster.)

Against this Hermanus’ camera (lensed by his Moffie cinematographer Jamie Ramsay), the editing by Chris Wyatt (who knows of pained British reserve, having cut both Ammonite and God’s Own Country), and the stunning score by Emilie Levienaise-Farrouch (who also did great work on the horror film Censor last year), all go big where Nighy goes small—Mr. Williams isn’t letting us into his interior landscape but the movie around him is making an opera out of it, bathed in beautiful sound and furious scenery. Living nods heavily at the British cinema of the late 40 and early 50s (one can’t help but think of the Archers) but blasts its doors off with very of-our-moment movement and swell. I thought of Todd Haynes’ film Carol a lot here, in this stormy reclamation of a cold period; of melodrama pressed against stone. (Also Living shares Carol’s genius costumer Sandy Powell, whose uncanny ability to make a pop of color stand out against a world of grays is truly unparalleled.)

Nighy isn’t the only performance in the film of note—it would do my praise of this film a weary disservice not to name-check both Aimee Lou Wood (from the series Sex Education) and Tom Burke (from Mank and The Souvenir), who each play vital roles in Mr. Williams spiritual rehabilitation as he faces down his final hours. Burke plays a seize-life type who, in one of the film’s stand-out sequences, tries to show Mr. Williams a good night after the dire news only to come up wanting. Wood is Margaret, a girl who works in the office briefly and who becomes Mr. William’s confidante and truest source of the spoils of life, of real living. Her sunny playfulness and youthful spark, a symbol of a better Britain’s future gleaming out from amid the ruins, gives his final crusade, against the zombie he’d stumbled into, a good bit of its profound purpose and shape. Set against Nighy’s reserved masterwork the both of them pop. But make no mistake, this is Nighy’s picture, and as such, it’s one suitable for framing.