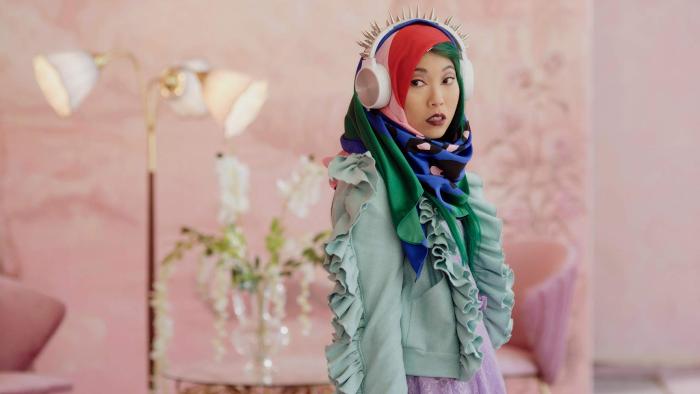 Review: 'Paradise Hills' Offers Stylish Spectacle, Feminist Themes, And Not Much Else

At first blush, the island at the center of Paradise Hills might seem like a dream come true. Far from the hustle and bustle of a world where the poor are scraping by to survive while the rich are spinning themselves into vicious games of corporate domination, there is a rapturous realm bursting with rose bushes and adorned in soft pinks and delicate details. The young women here are bedecked in brilliant white dresses that blend elements of new and old. They sleep in canopy beds, eat prim but chic meals, and enjoy makeovers in a sweet salon setting. But despite all these amenities, this is not a spa. This place is a pretty prison where rebellious young women are molded into the darling dolls that their parents demand.

Directed by Alice Waddington, Paradise Hills offers a distinctly feminine version of dystopia, where all that glitters is a gilded cage. Emma Roberts stars as Uma, a young heiress who is betrothed to a ruthless millionaire she loathes. Her mother desperately wants her to marry the creep, so Uma’s program is tailored to get her to say yes to his proposal. Therapy sessions with the beguiling headmistress The Duchess (Milla Jovovich) explore Uma’s resistance, while a unique method of brainwashing is meant to break it down. Refashioned as a pink-haired bride-to-be, Uma is strapped onto a glossy carousel horse, then hoisted high above a sky-scraping ballroom, where images of her would-be hubby dance around her like a video-dating ad on a relentless loop. (Imagine A Clockwork Orange’s brainwashing sequence but with a gleefully girly spin.) Desperate to break out before Paradise Hills breaks her, Uma finds allies in provocative pop star Amarna (Eiza González), anxiety-stricken Yu (Awkwafina), and proudly plus-sized Chloe (Danielle Macdonald). Together they seek to escape. But in their quest, they uncover the darkest secrets of this sunny institution.

The script by Brian DeLeeuw and Nacho Vigalondo delicately unfurl an intriguing vision of a terrible future. Snatches of conversation hint at a wider world of horrific economic inequality, while the heroines’ backstories reveal the suffocating standards by which these upper-class girls must abide. Their stories dip into elements of queer identity, body positivity, mental health stigma, and personal autonomy, suggesting that even the privilege of wealth doesn’t save them from the societal stigma of womanhood. There’s also the promise of a rumored wild zone, far from these sexist structures, where they might make their own rules. All these snatches are enchanting, luring us into a fairy tale of princesses in a terrible castle, who must be their own white knights. 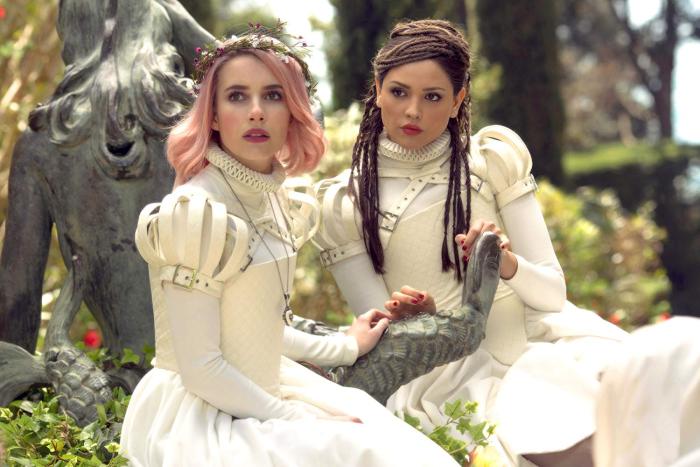 With a background in fashion photography, Waddington brings loads of style to her vision of Paradise Hills. And frankly, everything in its central setting looks so gorgeous, it’s easy to want to submit to the allure of The Duchess’s buttery voice and shimmery treatments. But there’s a sly subversion to all of these pretty elements. The white uniforms are lovely to look at, but between the corsetry and the buckles that wrap around the girls’ arms and chest, there’s a sense they are stylish sisters to straight jackets. Their canopy beds look a bit like birdcages. And the even the rose bushes that weave around the island are streaked with threatening thorns. The design of this film is lush with style, spectacle, and introspection, which underline the script’s feminist themes. It’s just a shame that beyond these ideas and looks, the film feels hollow.

While there’s plenty of exposition to establish its heroines, Paradise Hills does little to develop them. Set over roughly two months, the film skips forward with little indication of how much time is passing. This staggering pacing means the characters’ development feels disjointed as if there might be a crucial bonding scene or two that didn’t make the cut. The blossoming bond between Amarna and Uma feels rushed, while Chloe and Yu’s relationships are treated as an afterthought to all the film’s ideas and visual splendor. Regrettably, Roberts isn’t a powerful enough screen presence to elevate the film above these fumblings.

Roberts defines Uma by her resistance with sharp stares and slight sneers. Which makes her performance woefully one-note, and frankly uninteresting from a storytelling point of view. I couldn’t help but wonder how the drama might have been improved if the central protagonist wasn’t immediately suspicious of this paradise. As is, the script tips it’s hand too early by immediately insisting there’s something sinister here, because of course, Uma is right, even if she’s not got it all figured out.

Further vexing is how the focus on underwhelming Uma leaves little for the other characters to do. Macdonald has recently won praise for headlining the indie drama Patti Cake$ and the feel-good Netflix offering Dumplin’. Awkwafina slayed audiences as the comic relief in Crazy Rich Asians, then broke hearts as the lead of the heralded indie hit The Farewell. But here, they are playing sidekicks so underwritten they are practically fashion accessories. Jovovich’s role is slim too, but at least she finds the opportunity to bring some oomph to it. Still, it’s González who fares the best, managing to bring nuance to the guarded yet tender-hearted Amarna. In meaningful glances and sly expressions, she’s able to breathe life into a film that’s in desperate need of it. But sadly, she’s not its lead, and she can’t save it alone.

All in all, Paradise Hills is a visually intoxicating fantasy with rich insights into the traps of the feminine side of the patriarchy-approved gender binary. It’s smart and gorgeous, but it lacks the heart to make it poignant or profound.

Paradise Hills made its Canadian Premiere at Fantasia International Film Festival. It opens in theaters on November 1.

← Review: There's Little Heat to the Disjointed, Disappointing 'The Kitchen' | What the Hell is AMC's 'Lodge 49,' Anyway? →