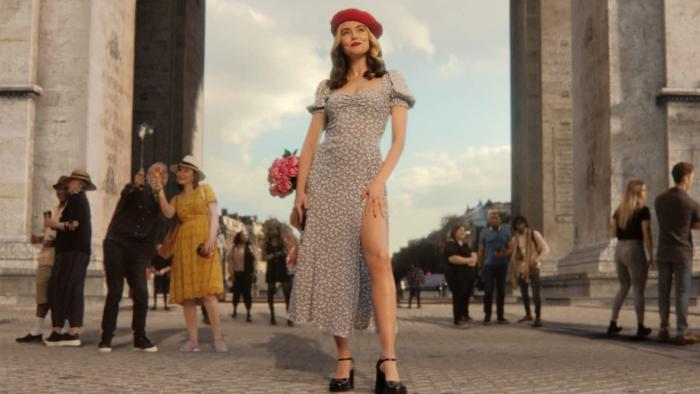 Review: ‘Not Okay’ Takes on the Narcissism of an Internet Influencer Scammer and Mostly Succeeds

Danni Sanders (Zoey Deutch) wants to be something. A friendless 20-something who works as a photo editor at a digital media company (think Buzzfeed crossed with Refinery29), she clings to her phone as if it’s part of her body. Social media is her way of faking a better life as she obsesses over likes, aesthetics, and the fuckboi object of her affection, co-worker Colin (Dylan O’Brien.) In an attempt to impress him, Danni makes up a Parisian writer’s retreat and creates elaborate photoshops of her time abroad. But then a terrorist bombing strikes Paris, killing dozens, and Danni decides to go along with this abhorrent new opportunity. Soon, she’s the face of a survivors’ movement, standing shoulder to shoulder with Rowan (Mia Isaac), a teenage school shooting survivor.

There’s something about the word ‘influencer’ that inspires abject cringe in most people I know. It’s a nonsense term, they say, a fake occupation that does little but fuel the worst excesses of narcissism in our already exhausting age of always-online freneticism. A couple of years ago, it felt like all we could talk about on social media was influencer culture, from diarrhea-inducing teas to Facetune alterations. In 2022, it already feels like a bygone age, a flash-in-the-pan moment of collective confusion like fidget spinners and the popularity of Vanilla Ice. How do you even begin to make a movie about that? Prior attempts to capture the malleable and anxiety-inducing high-low stakes of the internet have been mixed, to say the least. Ingrid Goes West came close to capturing the isolation that accompanies trying to live vicariously through strangers online, while Zola keenly portrayed the wild story of Twitter’s most iconic thread with the languid wit and self-awareness it deserved. Not Okay gets more right than it does wrong, but the errors are very much rooted in this conundrum.

Its smartest move lies in allowing its heroine to be deeply and irreparably repulsive. Written and directed by 27-year-old Quinn Shephard, the film often shows a pinpoint precise awareness of this micro-era of digital madness: the slang, the vaping, O’Brien’s Pete Davidson-inspired performance, the ways we consume the most overwhelming traumas in bite-sized chunks. The parasocial nature of this brand of fame Danni yearns for — and eventually achieves in such a bleak way — is especially fascinating to watch unfold. The validation of false victimhood fuels her, yet she craves the loyalty of someone who truly suffered. She desperately wants to be famous without actually doing anything of skill to achieve it. Her dreams of being a writer don’t seem to involve actually taking the time to write anything. Deutch, who is an actress of easy-going charm, manages to find something agonizingly relatable in Danni’s addiction, although she’s also appropriately caustic in a way that rejects sympathy. She’s not a mastermind manipulator so much as she’s a self-absorbed mess whose own lack of self-awareness does not allow for the possibility of tomorrow.

Danni’s lies work because there’s an entire corporate system in place eager to bolster them. Her colleagues who previously tolerated her are eager to play up the site’s performative progressive image by ‘giving her a platform’ to turn her supposed trauma into clickbait. For potential sponsors, it doesn’t matter what kind of famous she is as long as it gets enough eyeballs on their crap. She’s the exact kind of pretty blonde woman, complete with wealthy parents, who the world revolves around. The personal essay era may have been declared dead but the online media industry still thrives off of this redigesting of our pain. As she sinks deeper into her lie, she continues to suck up all of the oxygen in the room, drawing attention away from those who need and deserve it, like Rowan. So many very real people are feeding off her construct, sharing their own grief with someone who seems like the ‘perfect’ victim.

Once Rowan and her earnest campaigning is introduced, Not Okay moves from being scathingly funny to painful in its examination of narcissism. If your tolerance for cringe is low like mine, tread cautiously. Mia Isaac plays Rowan as a young woman of immense earnestness, smothered by her nerves yet determined to turn her trauma into something useful for the world. Unlike Danni, she has no real hunger for the public eye, viewing it more as a means to an end than her ultimate fantasy. In Rowan, Danni sees something she wants, that near-mystical quality she herself is utterly devoid of: authenticity.

Where things fall apart is when Not Okay tries to get meta with its takedown of the influencer lie and scammer culture it helped to birth. I’m not sure you can be wholly brutal in your study of delusional wannabe icons who do anything to achieve a sliver of attention when you keep giving sympathetic cameos to someone like Caroline Calloway (remember her?) It’s reminiscent of Jordan Belfort’s appearance as himself at the end of The Wolf of Wall Street: does the satire land when you’re letting the subject be in on the joke like this?

Then again, it seems likely that Calloway herself will miss the ultimate point of Not Okay. This is not about a woman who achieves redemption or even acts as an empathetic cautionary tale. To commit to this life is to fall headfirst into oblivion. Maybe you’ll get an anti-cancel culture redemptive arc or be ironically celebrated as a scammer goddess, but even that goes away eventually. Soon, all you’re left with is yourself, and for Danni, that’s the worst possible option. Why be lonely when you can be hated?

← Alicia Vikander Out as 'Tomb Raider,' Krysten Ritter In for the 'Orphan Black' Spinoff | 'Surface' on Apple TV+ Is Tired Gaslighting Thriller →