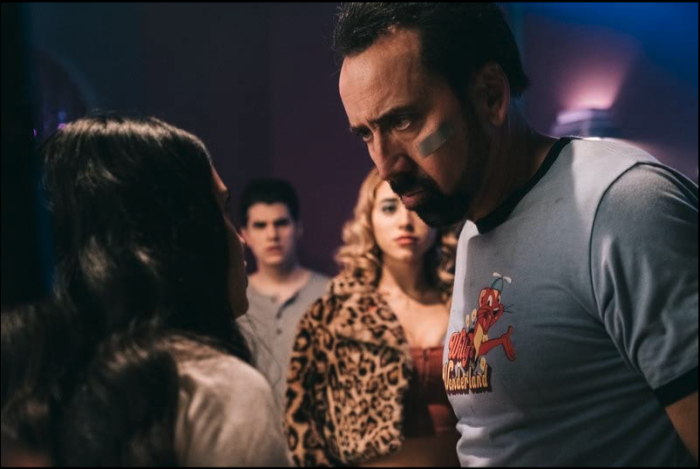 Review: A Killer Concept Can't Save 'Willy's Wonderland'... Even If That Concept Is Nic Cage Punching Evil Animatronics

If you, like me, are something of a Nicolas Cage completist, then feel free to stop reading and proceed straight to watching Willy’s Wonderland, his latest horror romp. You won’t be disappointed! Or rather, you probably will be, but not in any way you aren’t already fully prepared to be. You’ve already witnessed Cage face/off against wife-murdering cultists, a plane full of prisoners, a color out of space, even BEES. Now, in Willy’s Wonderland, Cage rages against a bunch of evil animatronics at a knock-off Chuck E. Cheese. Is it good? No, not at all really. But its problems aren’t of the “Nic Cage Punching Things” variety. When he’s punching, everything is a-ok.

Cage plays “The Janitor”, a nameless drifter in a fast car who does not utter a word for the entire runtime of this movie. Seriously. He’s tricked into spending the night at a defunct children’s theme restaurant, cleaning the joint in exchange for car repairs and fending off the murderous mascots as he goes. The concept, on the surface, is nearly identical to the video game series “Five Nights At Freddy’s”, only instead of licensing that IP they paid Cage and, in a decent twist, made him a bigger threat than all the amok animatronics combined. The issue is that the only things of interest in the movie are those few conceptual twists that elevate the effort above its own amateurish execution. Cage saw the potential in writer G.O. Parsons’ freshman script, and got excited to try something new (face-act with puppets, presumably). The final product, unfortunately, isn’t anything nearly as exhilarating as its premise.

Take the whole not-talking thing, for example. It’s supposed to make The Janitor stoic or mysterious, but it actually just seems to spur every other character into grandiose fits of expository word-vomit. Between the Sheriff (Beth Grant) and her foster daughter Liv (Emily Tosta) we are given the entire grim backstory of Willy’s Wonderland, which involves a clan of Satan-worshipping serial killers possessing the robots, and a town that agrees to offer them human sacrifices to satiate them. The explanation is fine in and of itself I suppose, but it doesn’t matter to the movie. How do I know? Because The Janitor doesn’t care. He doesn’t react to the info-dumps, just like he doesn’t react to the casual offing of the film’s teenage cannon fodder — and frankly, if it doesn’t matter to Cage then it isn’t likely to matter to the audience either. We don’t know what motivates him, but it sure as hell isn’t “saving the day” — and no amount of chattering side characters will distract us from the fact that the plot isn’t the point here.

The whole film is like that: self-aware gimmicks that are amusing at first, until you realize they are underscoring the film’s larger structural challenges. “He’s not trapped in here with them; They’re trapped in here with HIM!” Liv exclaims at one point, again making explicit the conceit that as scary as Willy the Weasel and his stable of cartoonish pals are, The Janitor is in fact worse. It’s a nifty twist to the horror format, but a tough one to sustain. If your hero is largely immune to your villain, and you don’t have the budget to fully lean into the fight scenes between them, then where’s the tension? There isn’t any, of course — unless you force your hero to take punctual breaks to play pinball. Yes, The Janitor sets his watch alarm so he knows when to sit down and relax with a fresh can of “Punch” energy drink, meaning the only question of whether he’ll successfully beat up the next baddie is if he can do it before the clock runs out and he… voluntarily walks away from the fight.

So he punches and kicks and gets splattered with grease, then changes into a new staff tee and cleans the restaurant again until he’s ambushed once more. Takes a break, cleans, fights, changes, takes a break. It’s funny, this repetition — the seriousness with which The Janitor takes his task only matched by how completely unfazed he is that these giant possessed puppets keep getting in his way. But it’s still just a gimmick, not a natural ratcheting of stakes. Willy’s Wonderland may have some cool concepts but that’s all it has, and it never leverages them to make the movie anything special. It’s fitfully fun in spite of itself, purely because — again — Nic Cage is punching foul-mouthed murder puppets and I’m not made of stone. Likewise, Cage seems to have signed on to the project for his own amusement, in spite of the fact that it was written by a first-time screenwriter and directed by a man (Kevin Lewis) whose last credit was from 2007. I guarantee Cage didn’t do it for the paycheck, because he couldn’t possibly have been paid much more than the cost of baseline Jeep. The idea must have just… tickled him.

What Willy’s Wonderland reminds me of, most of all, is Sam Raimi’s original Evil Dead. Don’t get me wrong — that movie may have been scrappy, but it was a true classic and Wonderland is not at all on par. Still, Raimi leaned into the things that worked (Bruce Campbell, gore, humor) and scrapped the things that didn’t (all of the other characters), remaking Evil Dead from the ground up as its own sequel. I think this movie is worthy of that sort of second chance as well. Only maybe next time spring for the “Five Nights At Freddy’s” license and go all in.