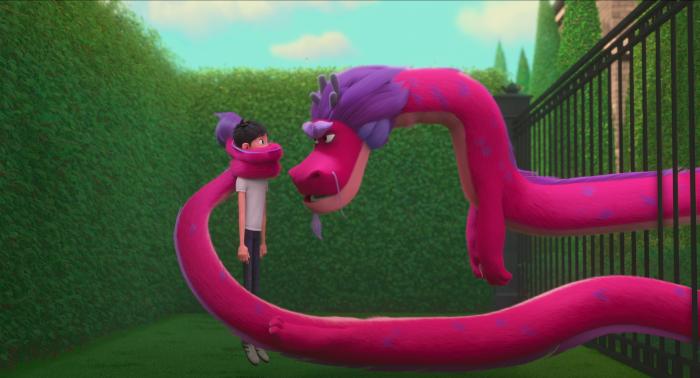 Din (voiced by Jimmy Wong) is a working-class student in modern-day China who has big dreams for his future. Balancing studies with a side-hustle as a delivery driver, he hopes to one day be worthy of his childhood friend Li Na (Natasha Liu Bordizzo), who moved away from their district and became a wealthy and wildly popular model. It’s a tale as old as time. Add a thousand-year-old teapot containing an all-powerful dragon who will grant Din three wishes, and you know where this is going.

Sony Pictures Animation has been on kind of a roll lately. Often seen as an outlier to the post-Pixar and DreamWorks age of American animated cinema, the studio has been making waves with visually striking and joke-laden films such as Spider-Man: Into the Spider-Verse and the recent delight The Mitchells vs. The Machines. Wish Dragon signals another new direction for the company. This is their first film produced by Base Animation, a new animation studio with the aim to ‘make world-class animation in China for China… and the world.’ The creative team is Chinese, save for writer-director Chris Appelhans is a white American. The English-language dub includes an all-Asian cast, and Jackie Chan is a producer. Following its release in China earlier this year, Wish Dragon is the latest Sony Animation to drop on Netflix.

In case you couldn’t tell, this is Aladdin. While that story has countless variations and many an adaptation to its name, it’s clear that Wish Dragon is borrowing more than a few pages from the book of Disney. John Cho is certainly getting his Robin Williams shine on with his voice performance as Long, the wisecracking and sardonic wish dragon who’s unused to the demands and weirdness of 21st century China and his new master. The humans of old wanted armies and gold suits or armor, not designer watches or entry to the coolest parties. The funniest scenes come when Din has to explain the mundanities of life to Long, such as buses, shrimp chips, and traffic. There are also some great moments of slapstick, such as when Din’s near-elastic form fights off some goons in a scene that feels straight out of a Stephen Chow film. One particular goon fights and interacts with the world exclusively via his feet in a way that is giddily bizarre. It’s the kind of fast-talking freneticism that feels straight out of an old-school Warner Bros. cartoon, even if the story structure and themes feel more thoroughly Disney-ish. Mercifully, there’s no bombardment of pop culture references. And there is one astoundingly filthy joke that made me genuinely gasp in surprise.

What’s different here from our expectations of an Aladdin tale is the emotional thrust. Din naively believes that basic human kindness can overcome such frivolities as class and financial stature, something Long is incredibly cynical about, having spent millennia granting the same wishes for gold and power to humanity. Making the expected wish for a lavish lifestyle isn’t to impress Li Na so much as it is to just get into her inner circle. But of course, one little lie quickly spirals out of control. We know the endgame with family-friendly stories like this, but Wish Dragon offers a couple of intriguing roadblocks. Sure, money won’t make you happy, but all the expectations and barriers that come with the wealth gap sure do hinder one’s life.

There are interesting ideas at play here that sadly don’t get a lot of room to breathe. Long’s past and his origins as a wish dragon provide the third act emotional push, but he is still firmly a supporting figure in Din’s life. The importance of social status and the rapidly growing capitalist force of modern China feels ripe for exploration. Yet, it’s not hard to see why the makers of Wish Dragon may have felt that was a tad too weighty for this story.

Credit must go to Jimmy Wong, an actor (most recently seen in Mulan) and YouTube favorite who imbues Din with a kind of spritely optimism that never outstays its welcome. Din is devoid of guile. He doesn’t snark at his mother (voiced by Constance Wu, who works best when she’s nagging Din incessantly) or disrespect the entertainingly nosey neighbors, who want to know every detail of his life. He doesn’t see Li Na as the cure for all his problems, and he’s not interested in manipulating Long for more wishes. Really, he’s just a sweet guy who thinks the glass is half full and would like to see everyone’s day be a little brighter. That could wear thin very quickly, but Wong is the right side of amiable. Plus, the film overall sees great value in having a hero who isn’t overburdened with misery or a dark past. It’s a pleasure to see at least one filmmaker agree that there’s nothing boring about a genuinely good hero.

What lets Wish Dragon down is that the animation and character designs are all pretty bland. They feel like cut-outs from the 21st Century CGI Family Movie handbook. It’s a disappointing contrast to Sony Animation’s recent efforts, like the dizzying comic book vibrancy of Into the Spider-Verse or the textured and lived-in feeling of The Mitchells vs. the Machines. It’s a perfunctory stylistic palate for a film that could have been so much more, especially given its influences and humor. However, the backdrop of Shanghai certainly has its moments. Still, for families that have exhausted their current slate of streaming choices, Wish Dragon will more than scratch that itch.

Wish Dragon will premiere on Netflix on June 11.