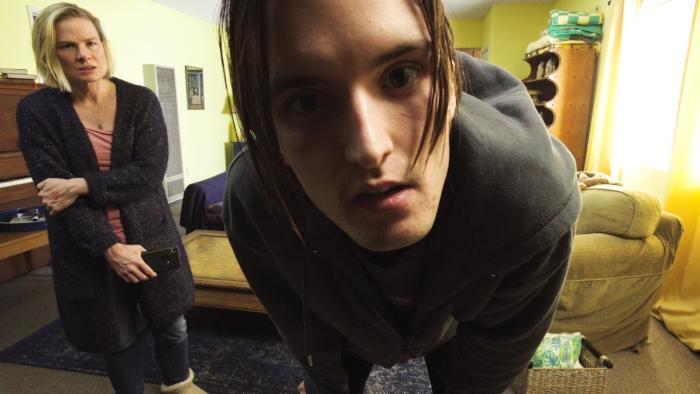 In the vein of The Bad Seed, The Babadook, and We Need To Talk About Kevin comes M.O.M. (Mothers of Monsters). This bold and disturbing found-footage thriller follows a single mother struggling to make sense of her 16-year-old son’s monstrous rage. Are his violent outbursts, macabre jokes, strange rants, and blank stares just typical teen angst? Or are they signs that he is a psychopath working toward a horrific plan?

Writer/director Tucia Lyman makes her feature film debut with this twisted tale, which is told entirely through videos. You see, 42-year-old Abbey Belle (Melinda Page Hamilton) fears her son Jacob (Bailey Edwards) has the world fooled. He doesn’t fit the profile of a burgeoning psycho. He has friends, is well-liked by his teachers, and gets great grades. But at home he is a beast, trashing rooms, issuing grisly threats, and keeping his closet conspicuously locked. Desperate to prove her son is a threat, she records him to collect evidence. It begins with slapdash phone recordings, clumsily framed and often secretly filmed. Soon, Abbey escalates her efforts, hiding motion-activated spy cameras all over her home, including Jacob’s bedroom, so she can expose the truth. But is she ready to face it?

Much of the film is narrated by Abbey, who delivers frantic monologues to one nanny cam or another trying to paint the full portrait of her son’s twisted transformation from proud bedwetter to dangerous sadist. Her camera cruises over a bunch of mutilated high-heels, claiming this was his doing. She recounts his past transgressions and tries to bait him into outbursts to capture his hidden monster on tape. But along the way, Jacob—wrathful and cold as he may be—begins to shape a narrative of his own, one that posits his mother is mentally ill, off her meds, and drinking to the point of delusion. Who are we to believe?

Curiously, the film plays as if on a computer screen with a messy desktop, full of video thumbnails. An unseen viewer steadily uncovers this war between mother and son by randomly clicking on one video after another. While this narrative method may seem haphazard, it’s pretty linear in its telling. Lyman has a sly hand in the structure, moving from Abbey’s allegations to Jacob caught on tape being increasingly cruel and violent. Yet, the found footage aspect begs you to wonder whose perspective you are in. Who is watching these videos within the world of the film? Who is the audience Abbey is making them for? And what is that sound that keeps playing amid them? It’s a thick, thunking sound, almost mechanical but not quite, yet increasingly unsettlingly.

Leanly budgeted but shrewdly shot, M.O.M. (Mothers of Monsters) creates a claustrophobic feel, breaking the family home into four monitored settings, each of which feels like a cage. But who is trapped with who? Tension builds thanks to the on-camera sparring of Hamilton and Edwards. With disheveled hair, wild eyes, and a ragged tone, Hamilton plays Abbey like a woman on the verge of a nervous breakdown. She often quakes with the strain of it all. Yet Abbey is first and foremost a mother who fears and loves her son in equal measure. Hamilton captures this heartbreaking conflict with a sharp tone that repeatedly melts into soft coos, desperately trying to cajole this mother’s monster to sweetness.

Edwards gives her no warmth in return. His eyes stare is dark, focused, and scorching, whether it’s turned at his mother or at the lens of a hidden camera he’s uncovered. His mouth knits into crooked grins and tight, intimidating frowns. His laugh is a bark, cold and mocking. Where Hamilton’s performance is grounded in parental stress, Edwards leans into the theatricality of teen angst, painting Jacob as a caricature of male rage and juvenile recklessness. Lyman’s hints that Abbey may be an unreliable narrator suggest this portrait of Jacob is incomplete. Which once more makes watching the film and interactive experience as we’re asked to untangle speculation and projection from hard truths.

Like most found footage movies, the journey can get a bit wonky, limited by the angles narratively established and the simple logic of “who would carry a camera when this horrible thing is happening!?” (See Cloverfield.) However, Lyman avoids the pitfalls of the subgenre by turning her established cameras into tools for the estranged mother and son to communicate. They can’t talk face to face because of so much bad blood, but the distance of the screen allows them to open up as they never have before. Plus, it gives both Hamilton and Edwards to focus their intensity right down the barrel of the lens and right at us. You will squirm.

Through this toxic mother-son tale, M.O.M. (Mothers of Monsters) explores the fear of school shootings, the hell of being a teenager, and the madness of being a parent. All of which culminate into a third act that is sharply horrifying and undeniably haunting. All told, this is a solidly scary thriller. Yet what’s most impressive is how Lyman thoughtfully structured the story, cinematography, and performances to do so much with a low budget. Simply put, this gritty indie is a diamond in the rough, and horror fans should seek it out.

M.O.M. (Mothers of Monsters) opens in Los Angeles on March 13.