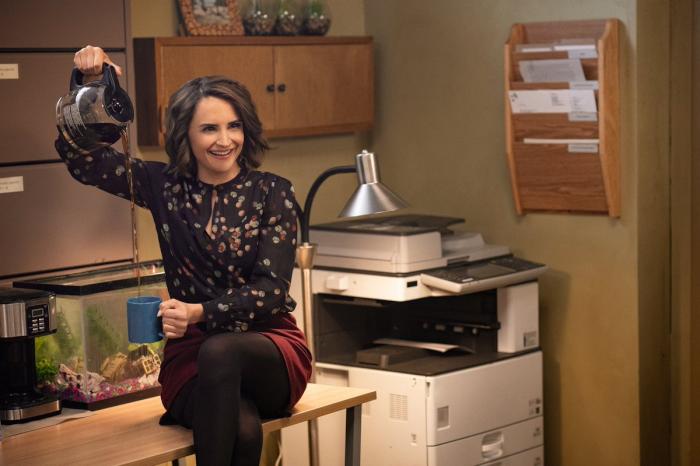 Review: 'Love, Guaranteed' is a Sweet Rom-Com Reminder of How Much We've Missed Rachael Leigh Cook

Remember Rachael Leigh Cook? Cook broke out in one of the most ’90s rom-coms of the decade, She’s All That, wherein she played the supposed ugly duckling in need of a swan makeover. It was and still is one of the most patently ridiculous moments in rom-com history, but Cook herself is easily the best thing about the deeply problematic movie. There’s a touch of Winona Ryder about her in that role, a sharpness that totally sells the ludicrousness of her character. She’s not quite edgy in the way Ryder was always defined during her youthful peak, but Cook found an appealing balance between sharp, sweet, and that magical strain of relatability that the genre is dependent on. Her star only burned for a brief moment, however, as she recently admitted that the box office failure of Josie and the Pussycats, a movie that now commands a loyal cult fanbase, put her in ‘movie jail’ for many years.

Nowadays, Cook has settled into Hallmark Channel territory, and there are echoes of that well-worn genre mold on display in Love, Guaranteed, the latest Netflix romantic comedy to promise 90 minutes of comforting distractions for the eager viewer. You know exactly what this movie is doing and where it’s going. You could set your watch to its beats, but hey, formula and archetypes are not always a bad thing in film.

Cook plays Susan Whitaker, a hard-working and deeply moralistic lawyer whose soft spot for pro bono cases has left her struggling for cash (although she still has a lovely home and some top-notch fashion choices because the genre will not accept anything less.) With the bills piling up, she ends up agreeing to a unique case: Nick (Damon Wayans Jr.) wants to sue Love Guaranteed, a dating website that claims its users will find The One by their thousandth date. Nick is on date 986 and wants to take on the corporate behemoth for fraud.

Love, Guaranteed is the kind of film where you could easily imagine everyone involved slumming it. The formula was set in place by the rom-com gods and all the cast and crew need to do is join the dots. It’s a pleasant surprise that the ensemble is not only giving it their all but clearly enjoying themselves in the process. Director Mark Steven Johnson, perhaps best-known for Daredevil and Ghost Rider, brings enough glossy flair to the expected cycle of montages and postcard-perfect shots of the Seattle landscape to keep things interesting. Cook and Wayans have a warm and believable chemistry and Cook in particular seems perfectly tailored for this kind of role. It’s a retro movie and she eagerly captures the old-school spark of that highly specific period of cinema. You know it when you see it.

The downside of that retro commitment is that the movie doesn’t bring anything especially fresh or vital to some material that’s ripe for mockery. Film and television as a whole tend to get oddly lazy when it comes to tackling modern love in its online form. Even great writers seem unable to fully untangle it. The majority of jokes here are one-note, relying on the token weirdos and an endless array of oddities so unusually varied that Nick even lists them with Friends-style labels (such as ‘the one who spoke about cats all night’ and ‘the one who brought her parents on the date.’) It’s not as though the film is offering anything more complex than an hour and a half of fizzy fun, but missed opportunities are missed opportunities for a reason.

Heather Graham cameos as a Gwyneth Paltrow-esque lifestyle guru who runs the dating site, and it’s a curious choice on the part of the movie. Graham is tasked with providing the kind of bonkers comedic presence that one would typically rely on Maya Rudolph or perhaps a Kristen Bell to bring some heft to. This, to put it kindly, is not Graham’s forte. When the joke is this obvious, the actor needs to dig a little deeper and Graham just doesn’t. At least the other token comedic supporting characters, particularly Susan’s employees, are having a good time.

I can’t guarantee (heh) that you’ll remember this movie for long after it concludes and Netflix tries to get you to watch Cobra Kai, but hey, do you need it to? Love, Guaranteed ticks off every box on its agenda and wraps things up with a big sloppy kiss. I was pleasantly distracted for 90 minutes and laughed out loud at least three or four times. If Rachael Leigh Cook wants to commit to a few years as Netflix’s new rom-com queen, I would not be mad.

Love, Guaranteed is now available to watch on Netflix.

← Review: 'The Dark And The Wicked' Offers Devastating Haunted House Horror | Robert Pattison Tests Positive for Coronavirus, Shuts Down Production on 'The Batman' →