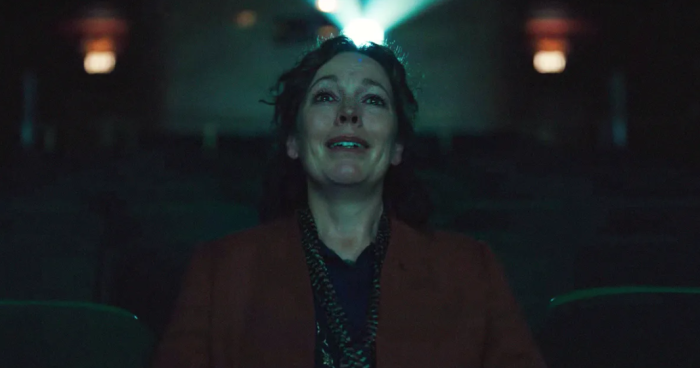 Have you ever been inside a movie theater’s projection booth? It’s where magic turns into sprockets and greasy fingers. Walls of overlapping band stickers. Where you can’t hear the music or dialogue for the spinning of gears and the sinister slapping of filmstock, and where a cinematographer’s grand vision is turned into a dusty postage stamp. There’s poetry to it though, in the way of an artist’s charcoaled fingers—the practical matters of dropping your brain outside of your body, of turning firing synapses into a fleeting static that people actually desire.

And there are moments, the best ones, in Sam Mendes’ beautifully-acted but narratively adrift Empire of Light where he does capture that, bless it. Working in a movie theater is just a job in the way that being a guardian angel at heaven’s gates no doubt demands nap breaks. You clock in, you hand Jujubes to teenagers and the malcontent, you sweep up popcorn kernels as the city closes around you, and repeat. For some, it’s an oasis, a cathedral; for others a squalid lunch-break room where the clock bears down upon you as you gulp down your yogurt quick as can be in between shows. A dead body discovered during Smokey and the Bandit sustains you for decades, even as the big screen dwarfs your personal highlight reel by the time the previews are run through the gate. Let’s just say when the projectionist (a wonderful Toby Jones) speaks of the film’s play between light and dark tricking our eyes into seeing movement, it’s a metaphor that lands.

It seems to be the latter kind of imagination-less work-place for Hilary (Olivia Colman), who when we meet her is so going through the motions you wonder if she might be wound like an automaton every morning. Flick on the lights, unlock the doors, stand stock-still in place staring into nowhere as the other dull people mill past. It’s a hair shy of dreary but it’s passed its prime, this state of being—you can sense the cobwebs gaining hold in the upstairs. It makes sense when we watch Hilary go to her doctor and comes home with great big bottles of pills, but Mendes takes a whisper too long in his reveals, playing coy with details that don’t need to be treated like grand revelations later on; indeed it’s maybe a little tasteless to play them that way? There’s giving a character their privacy and there’s exploiting it for manufactured drama, and Empire of Light leans ever so slightly latter-ward when it really didn’t need to.

Still thank goodness it’s Olivia Colman we’re talking about here, doing the heavy-lifting. If that’s any actress working today who can fill in every nook and corner of a wanting script it’s her and her face that shines so open and honest you’re caring before you know it. What a blessing she is, and how fortunate it is that we live in a moment where the people with power to make movies happen see that too—I could write as many words in ode to her screen-presence as I could watch hours of her showing it off, and believe me those numbers are nigh incalculable.

Mendes stacks the deck so hard with game-top collaborators that it’s just a shame his story in service of them lets them all a little down. Cinematographer Roger Deakins wrings such grand beauty out of this Deco-flecked British seaside movie-palace and its pigeon-crowned wings that this might be a movie to watch with the sound turned off, remaining in total rapture. Although then you’d miss out on the fine atypical score from Trent Reznor and Atticus Ross, or the gentle hum of the ocean and the movie-screen that beats behind every scene, or of the little whispers of pleasure that Colman lets out as she discovers a temporary romance coming from an unexpected source.

That source would be her young new co-worker Stephen (Michael Ward), who brings music and fireworks into Hilary’s life just when she most (or, perhaps from another vantage point, least) needs them. Ward is winning and terrific, a real discovery, even as he’s sadly saddled with the script’s biggest fistfuls of ham. Wounded birds and lines about racial tensions (Stephen is black) and the rude-boy music-scene he loves where different types of people can come together pile up around him aggressively unsubtle, too at odds with the quiet, thoughtful movie that you feel Empire of Light really wanted to be. The sound of seagulls and spinning film reels and a single tear running down Olivia Colman’s cheek—these are the things of which an empire is made; they could have been all the light we needed to keep the terrifying spaces in between far at bay.


← 'Abbott Elementary' Is Trying to Kill Us | 'Matt Rogers: Have You Heard of Christmas?' Is the Moment →


Image sources (in order of posting): Searchlight Pictures,
Most Viewed