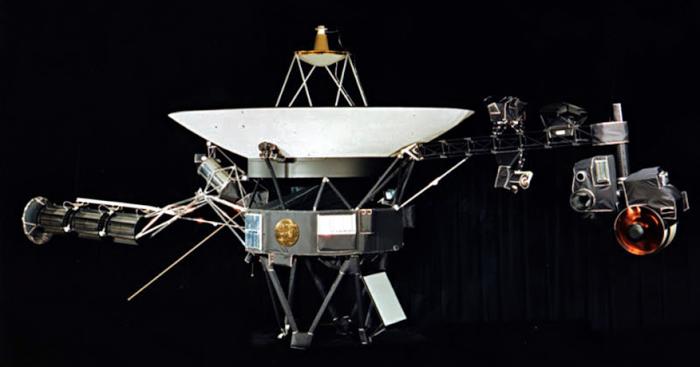 Review: 'It's Quieter in the Twilight' of Voyager's Final Frontier

Back in 1977, the four outer planets (Jupiter, Saturn, Uranus, Neptune … sorry Pluto) were going to be aligned together in a way that only happens every 175 years (their last such alignment was during the Jefferson administration!). This was a big deal because it created a unique opportunity to daisy chain some gravitational slingshots — that is, a spaceship could use each planet’s gravity to help flip it along to the next planet. And thus was born the Voyager “grand tour.”

Voyager 1 and Voyager 2 were both launched with the hope that one would make it through the whole journey. From 1977 through the late ’80s, both spacecraft managed to stay more-or-less fully operational, feeding scientists across the globe with astounding new information about our solar system. You know the famous photo of Earth, the Pale Blue Dot? That was Voyager 1’s little goodbye note to us at it left the planetary portion of our solar system in 1990. Astounding.

More astounding still is that today, almost 45 years later, both spacecraft are still in flight, with nine of their combined ten scientific instruments still working. The sun is about eight light minutes from the Earth (that’s how long it takes the sun’s light to get to us), which is about 93 million miles, or one AU (astronomical unit). Voyager 1 is currently over 150 AUs from Earth, while Voyager 2 is “only” about 130 AUs away. They’re still in the solar system, but they left the heliosphere (the “bubble” of the sun’s influence, if you will) several years ago and are now truly in interstellar space.

It’s Quieter in the Twilight takes us along on this journey, focused on a few of the dozen engineers still working on the Voyager project. In its prime, there were over a thousand scientists and engineers involved. But these dozen people are the lifers, on the journey with Voyager 1 and 2 until there’s no more signal left to receive (everyone is hoping to get to the 50th anniversary in 2027, and both ships are projected to still have some life left through the decade). The documentary deftly walks the viewer through the history of this mission, explaining some complicated concepts with a nuanced simplicity, allowing us to get our feet just wet enough to understand the impossibility and import of it all. Director Billy Miossi smartly gets to know several of the participating scientists and engineers as well — they’re not just talking heads but are allowed to express emotion, tell their own stories, and tell how they came to be part of the project. This creates an emotional connection for the viewer which, in turn, allows us to latch on to their emotions about the project. It’s a tricky feat to pull off, and Miossi does so deftly.

In fact, the payoff for this emotional bond comes late in the film. There’s only one place on the Earth that can send and receive signals to Voyager 2, a research site in Australia. The film builds towards an extended window of time when the research site will be closed for repairs, leaving Voyager 2 truly in the dark for months. Before then, some final back-and-forth communication has to happen (which is a very slow conversation, as it takes about 17 hours for a signal to travel one way between us and Voyager 2). Things go a bit sideways and we viewers suddenly find ourselves actively rooting for this beautiful, dumb, and amazing little hunk of metal that is so very far away. How it plays out is almost beside the point, because if the Voyager mission has told us anything, the pleasure and learning have everything to do with the journey itself.

It’s Quieter in the Twilight had its world premiere at the 2022 SXSW Conference.

← 'The Takedown' or, 'Lupin Becomes A Cop' | Netflix's Crackdown on Password Sharing May Come Sooner Than You Think →