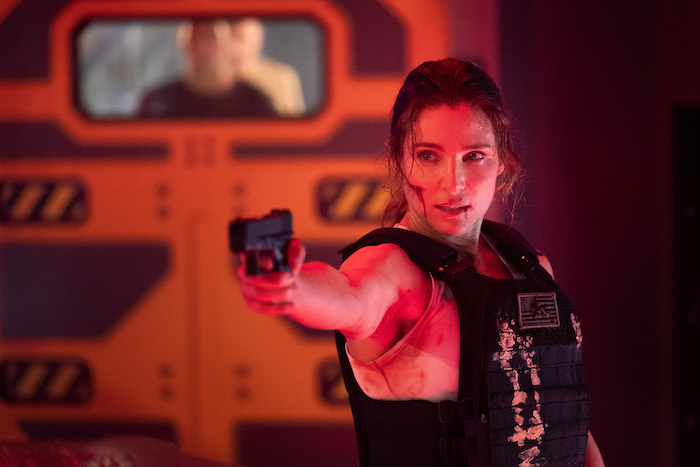 What is Interceptor? Sure, it’s a movie on Netflix—one that unexpectedly jumped to the #1 movie position and stayed there for a hot minute, I might add. It stars Elsa Patakay, best known for playing the supporting role of Elena Fuentes in the Fast & Furious franchise. (And yes, her husband Chris Hemsworth does have an extended cameo before you ask.) But what is this movie really? I have watched the thing with my own eyes, and yet I still struggle to find the words.

Looking broadly, the film is mind-numbingly straightforward—90s Steven Seagal, not 2010s Steven Seagal; it’s bad, not a form of torture. The directorial debut of prolific action-thriller novelist Matthew Reilly, the premise of Interceptor is simple: there are two military bases with the counter-strike capacity to neutralize a nuke launched from Russia before it can reach US soil. In the opening scenes, we see one base being overrun by terrorists; the rest of the movie follows the newly assigned Captain JJ Collins (Patakay) as she attempts to protect the other remaining base from such an attack led by trust-fund-douche-gone-rogue Alexander Kessel (Luke Bracey).

That Interceptor is co-written (with Stuart Beattie) and directed by Reilly, an established novelist who has authored books with solidly respectable scores on Goodreads, utterly defies reasonable explanation. The dialogue is so atrocious it feels like it was written by aliens whose understanding of the human condition comes from a dude they saw at a zoo one time. Or, at the very least, like the script was run through five different languages on Google Translate before being reverted back to a funhouse mirror version of English.

The true bafflement is in the details; in how instead of “the ends justify the means,” a character at one point throws out the decidedly more awkward “the result justifies the deed,” like a kid who Thesaurus-ed too hard on an essay. In how there are story beats that are explained five or more times with the subtlety of a bedazzled sledgehammer, and then others that are bafflingly unexplained. For instance, JJ’s tiredly tragic/tragically tired backstory — movies still find it weirdly difficult to center a female badass without succumbing to the lure of throwing in a traumatic sexual abuse backstory, for whatever reason — is thrown in early and hit on often. As JJ is first greeted by the other staff on board, we get the story of her sexually abusive former superior alluded to through dialogue, then plainly stated through dialogue, then shown for good measure in a flashback of an unsanctioned ass-grab. And this is just in the first act.

By contrast, much of the logistics of the villainous Kessel’s master plan, and his convoluted motivation, remain utterly confusing. While Interceptor earns some points for trying to put a more progressive, modern spin on the outright retrogressive ideas often found in such schlocky action flicks, there’s a weird and ultimately ineffective way in which the film attempts to play both sides: patriarchal hegemony is evil, but ‘Murica is great, and commie anti-capitalists are the evilest of all (but those Proud Boy incel types, they’re also bad). Kessel is an evil trust fund brat, but he’s gone full anarchist to spite his father, so the actual underlying message is neither here nor there.

It is almost to the film’s advantage that its use of hot-button issues and seeming attempt at commentary is so indecipherable; it renders what could have been offensive into something rather benignly inane. On the subject of the inexplicable, there’s also one nameless goon early on who for reasons that are utterly unexplained attacks JJ wearing a vat of sulphuric acid on his back. Literally, why? And I can’t help but mention one particular scene of casual insanity in which JJ fills a bathtub using the shower. Intentionally. As in, she intends to sit in a tub full of water, there is a faucet right there, visible in the frame, and instead turns on the shower head. A small, yet deeply disturbing act of what-the-f*ckery.

All of this to say, Interceptor is not a good movie. Admittedly, it is, at times, a fun movie. There’s some okay-ish fight choreography, some commendably creative kills, and scattered nuggets of so-bad-it’s-good cheese. Unfortunately, the visual storytelling throughout is overwhelmingly bland and uninspired, and narratively, a drawn-out, numbingly static second act shifts the overall scales from “entertainingly bad” to “just plain dull.” The energy picks back up in the last 20 minutes or so, but the middle stretch feels twice as long as it has any right to.

All of this to say, I cannot actively recommend Interceptor, but if you are looking to throw on something mildly entertaining that only demands about a third of your attention and engages zero brain cells, there are worse options out there.

Interceptor is streaming on Netflix.