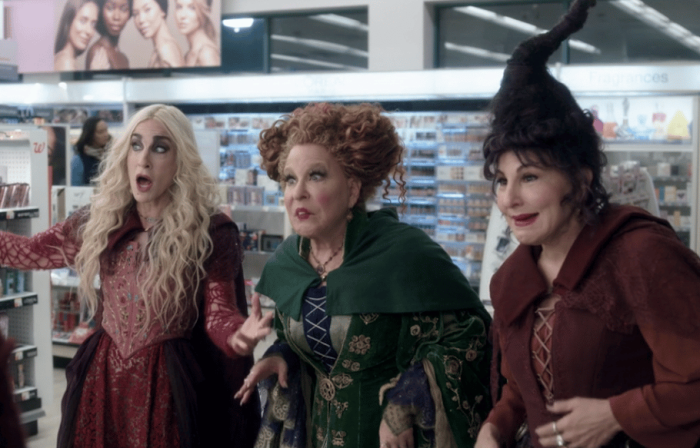 As an elder millennial, I probably shouldn’t admit this but … Hocus Pocus isn’t a great movie. Don’t get me wrong, I love it, but it’s not some unassailable masterpiece. It wasn’t even successful when it was first released in 1993 — it bombed critically and commercially until years of exhaustive cable reruns transformed it into the Pumpkin Spice Latte of October entertainment, a flavor we crave as part of the seasonal VIBE. And just like pumpkins and coffee logically shouldn’t work together, so too is it obvious that maybe hinging an entire kids’ movie on virginity and “Actually the Salem Witch Trials were justified” isn’t a good look! Our nostalgia for the film is earned entirely by its ubiquitous familiarity and the game central performances of Bette Midler, Sarah Jessica Parker, and Kathy Najimy as the evil witches known as Sanderson Sisters. In 1993, it was unusual to see a trio of leading ladies headlining any movies that weren’t about falling into or out of love, and here these three were, turning in a gonzo comedic performance that hewed closer to the Three Stooges than the Wicked Witch of the West. They sang, they danced, they cackled, and they clearly were having a blast — enough that their enthusiasm became the audience’s as well.

So if we can agree that the best part of Hocus Pocus — the only part that matters — is the Sanderson Sisters, then really the sequel had a relatively low bar to clear. All Hocus Pocus 2 had to do was bring back Midler, Parker, and Najimy and not eff it up despite the toll that 29 years can take on actors and audiences. Good news, then, that the movie does not eff it up at all! Everything involving Winifred, Sarah, and Mary Sanderson feels like a natural continuation of the original film, as if they were dispelled on Halloween night in 1993 and were summoned exactly as-is again in 2022. Which, you know, is the actual plot.

Another set of teens accidentally summon Salem’s favorite witches, and the sisters subsequently run amok amok amok. Their attempts to exact revenge on the town are still hindered by their confusion with modern technology (Retinol! Roombas!) and desire to take song and dance breaks (Blondie’s “One Way Or Another,” this time), not to mention the continued interference of the teenagers. If anything, the only occasionally sour note is just how uncanny it is to see Midler, Parker, and Najimy back in these roles again, as if you have to consciously reconcile what your head knows of how time works and what your eyes are witnessing. This isn’t some Star Wars digital de-aging doing the heavy lifting, it’s pure energy — vibes, even. It’s three actresses who fell right back into an old rhythm made new again thanks to a script that refreshed the familiar gags without reinventing them. In that sense, Hocus Pocus 2 simply does not mess with a good thing, and that alone is more than enough to justify its existence.

Yet the sequel manages to do quite a bit more than just offer a direct line to our nostalgia — it also takes aim at the less beloved elements of the original and updates them thoughtfully. Screenwriter Jen D’Angelo has worked in the comedy space on shows like Solar Opposites and Young Rock, while director Anne Fletcher is best known for turning out beloved genre fare like Step Up and The Proposal. Together they don’t necessarily reinvent the wheel, but they do take a good long look at it from a modern perspective and help it roll along more smoothly.

Where the first Hocus Pocus was only concerned with the misdeeds of the Sanderson Sisters, their demise and the curse that ensured their return, the sequel kicks things off by looking even further into their past to their childhood. Aside from the eerily perfect casting of young Winifred and her sisters (seriously, shout out to Taylor Henderson for doing Bette proud), this rewind recontextualizes the Sanderson saga by showing the forces that pushed them toward witchcraft (the patriarchy, always the patriarchy). Orphaned at a young age, the mildly morbid but mostly harmless Sanderson siblings were taking care of themselves until a meddling preacher named Reverend Traske (Tony Hale) takes it upon himself to correct the ungodly youths by marrying Winifred off and rehoming Sarah and Mary. Instead of accepting their fate, the sisters escape together into a forbidden wood where they encounter the powerful Witch Mother (a scene-stealing Hannah Waddingham), who introduces them to the wicked arts — and hands Winifred her beloved magic tome called Book. What we know to be true of the Sanderson Sisters, that they eat children’s souls and such, is still true. They aren’t absolved of their evil, but the film at least acknowledges that their wickedness is rooted in an attempt to secure their own safety and independence. They weren’t always evil, witchcraft isn’t inherently bad, and a bunch of prejudiced louts aren’t the best judges of what’s wicked and what’s just weird in the first place.

Largely ditching the “virgin lights a black flame candle” aspect of the original’s curse, the sequel focuses on what it means to be sixteen, on the cusp of adulthood and maybe, just maybe, on the cusp of greater power still. It matters that Winifred was sixteen when she got lost in the woods, and it is no coincidence that Becca, our new heroine (played by Whitney Peak), is turning sixteen on Halloween as well. She has a birthday tradition with her childhood pals Izzy (Belissa Escobedo) and Cassie (Lilia Buckingham) to perform a little magic circle ceremony on her birthday, but with Cassie distracted by her meathead boyfriend these days, Becca and Izzy must continue the tradition by themselves. They are loyal patrons of the local magic shop, which happens to be located in the old Sanderson homestead and run by the eccentric Gilbert (Sam Richardson, delightful as always). He’s a Sanderson Sisters aficionado and even claims to have their original spellbook in his collection. Gilbert celebrates Becca’s birthday by gifting her a special candle to help her with her ceremony, and you see where this is going right? Becca and Izzy accidentally summon the Sanderson Sisters on Halloween night, as orchestrated by Gilbert who became obsessed with the witches after witnessing their escapades 29 years ago. Instead of sucking all the children dry, Winifred sets her sights on exacting revenge on Reverend Traske’s bloodline — namely Salem’s current mayor (also Tony Hale) and Becca’s friend Cassie. And if that fails, she’s even willing to perform the one forbidden spell in the Book, which offers her unlimited power, before her time runs out.

By the time you realize that Becca is coming into her own magic on All Hallow’s Eve, it’s clear that Hocus Pocus 2 is telling a story about sisterhood. It draws parallels between Winifred and Becca and their respective covens, and in doing so offers the Sanderson’s an exit that doesn’t end in defeat. These witches are still wicked, perhaps, but when Winifred is offered a choice between loyalty and victory she follows her heart. These small thematic tweaks, in addition to the stellar new cast and exultant return of the originals (including Doug Jones as the zombie Billy Butcherson), help Hocus Pocus 2 cast its own sort of charm. You don’t have to have seen or remember the original to appreciate the sequel, which may help make it a seasonal staple for a whole new generation. But I’d also wager that for those of us who do love Hocus Pocus, in all its glory and its flaws, it’s impossible not to be swayed by the clever way the sequel weaves together the best parts and gently corrects the worst. Hocus Pocus 2 is that rare sort of late-stage sequel that is more than opportunistic. It’s respectful of the past while having its own point of view to add to the pot.

Though yes, it does leave the door open a crack for additional sequels, if the end credit scene (and return of the Witch Mother’s blackbird) are any indication. This is still a Disney joint, after all. It may take them another thirty years, but IP never dies.