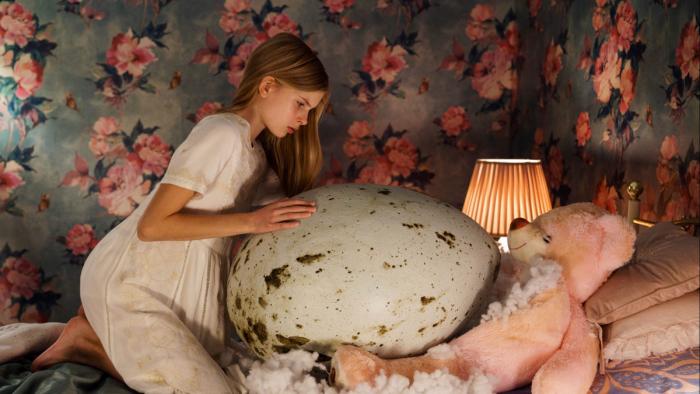 Review: 'Hatching' Is A Finnish Fairy Tale Of Most Fowl Play

Like a quick-and-dirty Courtney Love anthem brought to movie-monster life, the new horror flick Hatching now streaming after premiering at Sundance, reveals itself to be an unsettling if a whisper too slight Finnish fable about unbridled Grrl-hood—underlined emphasis on that “grr” part. Especially as its last act slimes up all of its flouncy floral dresses with every slick pink fluid there is and ever might be under the sun. I mean if you can’t hear Courtney growling, “Ohh make me overrrr!” in your head as our little teenaged lead Tinja (a totally game Siiri Solalinna) splits her mouth at its seams and drools into her perfect mom’s screaming mouth, then maybe you just weren’t listening to women!

The first feature from writer-director Hanna Bergholm, Hatching tells the story of Tinja, teen gymnast, living under the firm hand of her lifestyle-blogging mother Äiti (Sophia Heikkilä), a woman who will snap a bird’s neck with a serene smile on her face if it dares interrupt family photo-time, only to then have Tinja put it in the trash, specifying “organic” with an unnerving calm. The other two-quarters of this perfect Insta-filtered family—papa Isä (Jani Volanen) and younger brother Matias (Oiva Ollila)—register as mere cucks and whiny conundrums opposite these two strong-willed women; this here is definitively a woman’s world, but one of a stifling airlessness, with sparkles so perfectly appointed as to cause blindness, insanity, and prolonged suffocation.

At her mom’s command, Tinja dutifully takes that bird’s twisted body out to that organic trash-heap, but it turns out the poor thing’s not quite dead yet at all. Not by a long shot. And, one thing leading to another as these things inevitably do in these kinds of movies, before you know it there’s an egg the size of Tinja’s torso nestled inside her favorite bubblegum-hued teddy bear. And naturally, that egg then births out a spindly bird-monster, one with a taste for human flesh thrumming through its cold bird’s brain. Naturally. Fast becoming her not-so-little secret, Tinja tries to hide the wet-beaked ever-cawing thing, first under her bed and then in her closet. But its will strengthens as Tinja’s crumbles—both in the face of a new neighbor who proves to be the sort of excellent gymnast Tinja can only dream of being, and then under the continued drumbeat of her mother’s ever-demanding nature. The pressure of all of it turns Tinja’s blistered fingers raw with rage, and each successive tumble offers this new big bird friend up some tasty targets of ire. All the better to eat you with, my dearie!

Hatching definitely shows a lot of promise—Bergholm is a big one to watch—even if it ultimately feels like a short-film stretched to just-beyond feature length at its sparse ninety minutes. Its fairy-tale simplicity will feel like a boon to some but a boondoggle to others—I find myself falling down that middle? It introduces a lot of solid ideas about teen girlhood, about overbearing mothers who prioritize friendship over parenting, about the toxic cloud of social media that’s poisoning our every personal interaction. And it’s all well-acted by its cast and beautifully filmed by its crew. Most importantly of all its avian beastie is a delicious little wonder of slimy design and old-school puppetry—I delighted at its every snap, spurt, and sway (major props to special effects supervisors Conor O’Sullivan and Gustav Hoegen). In the end Hatching just feels like Bergholm introduces a lot of goodness only to take that goodness halfway.

Take Tinja’s gymnastics career, for instance. I realized last year watching Isabelle Fuhrmann give one of the year’s best performances as a single-minded rowing phenom in the excellent The Novice (most definitely seek that one out!) that the world of movies about female athletic obsession remains woefully underrepresented on-screen, and what a fresh experience it remains, seeing the way bodies different than the ones we’re used to watching react to the stresses of extreme physical training. Every so often we’ll get a thriller about Natalie Portman cracking her toes and going nuts in a ballet company, but we’re more likely to get something like the extraordinary accomplishments of the Williams sisters reduced to a feel-good saga about some man.

Unfortunately, Hatching never makes it quite clear whether Tinja actually gets anything out of twirling on the parallel bars until she’s bruised and bleeding, or if she’s only doing it for her mother, and it never seems quite interested enough in that question either. The very real body horror of what gymnasts go through—as a person with two adult friends whose bodies are battered shells thanks to their childhood experiences on the mat I have seen this scary stuff first-hand—isn’t as fully explored as it should be. The bird monster is a fun metaphor but it stays weirdly removed from Tinja’s own body more than it should, and it’s hard not to see some funhouse-mirror opportunities lost that could’ve deepened Hatching in meaningful ways. As is Hatching is worth seeking out, blessedly Grimm little beastie it might be, but keep your expectations checked—this chick(en) flick never quite crosses the road.