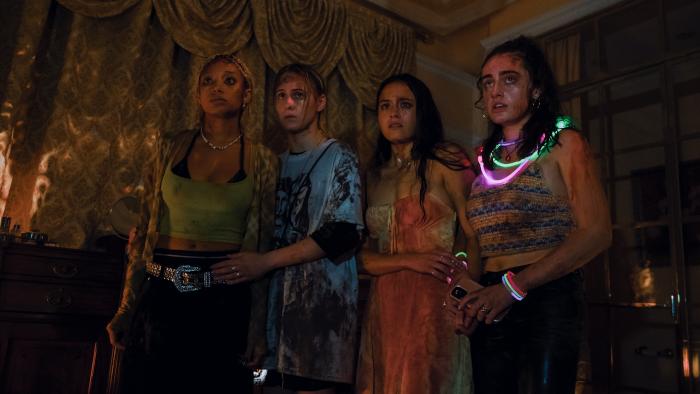 All the best stories start with seven precise words: “It was a dark and stormy night.” Everybody from Stephen the King to Snoopy the Dog agree. Ninety years after James Whale’s classic The Old Dark House saw Gloria Stuart checking on what horrors Boris Karloff had awaiting for her at the top of the stairs and we’re still hot to trot to watch seven strangers picked to live in a house and find out what happens when people stop being polite and start getting really, really violent. Bodies Bodies Bodies, director Halina Reijn’s frightening and funny new Gen-Z Slasher—“Zlasher” perhaps?—is just the latest hippest notch of this sort in horror-history’s belt. But what a notch! What a ride! What a fun smack upside the posterior it is!

In what might be the ultimate nightmare depiction of meeting your partner’s best friends for the first time, Bodies Bodies Bodies first introduces us to Bee (Maria Bakalova of Borat 2 fame) and Sophie (Amandla Stenberg from The Hate U Give), a swoonily-in-love couple of six whole weeks who are headed to the ghastly Chappaqua McMansion of David (Pete Davidson), Sophie’s lifelong best friend. They’re going there for a “Hurricane Party”—there’s a storm a’coming ya see, and they plan on trapping themselves inside to wait it out with some flashlights, some glow-stick necklaces, and piles upon piles of every drug you can imagine. Other babes on board include David’s actress girlfriend Emma (Chase Sui Wonders), the exuberant podcaster Alice (Rachel Sennott, proving the great Shiva Baby weren’t no fluke) with her much older Tinder friend Greg (Lee Pace, ten full feet of exquisite as ever), and seventh-wheel Jordan (Myha’la Herrold), who eyes Bee with serious contempt the second she walks in the door.

As the rain begins to fall and as the secrets begin to spill, it turns out that not a single one of the relationships between these people, whether they be measured by weeks or lifetimes, is what they seem—the toxicity floods the place quicker than any little ol’ storm could manage. Then you add on all of those drugs, all of that booze, and you top it off with the mean-spirited party game of the film’s title, and we’ve got ourselves a recipe for unbridled Zoomer mayhem, is what we’ve got.

That game consists of one person being secretly designated the “killer” via lottery, making it their job to sneak around and pick off their friends one by one via tap on the back. After everybody splits up and all the lights are turned off, of course. Oh and after everybody slaps everybody else in the face as well, for some reason. Bonding rituals by abuse—ain’t nothing more filled with love than that! Of course, old rivalries make quick friends with mounting hysteria—driven home nicely by the soundtrack’s insistent pounding of weather on the walls and windows of the suburban manor—and before you know it real blood begins to trickle, tumble, and torrent down. And the bodies, bodies, bodies begin to hit the floor.

Bodies really bridges that slight gap between Slasher and Agatha-Christie-style Whodunit—in the wake of Knives Out reinvigorating the latter genre I imagine this one will rightly be lumped in there alongside those, as it’s definitely more “Clue meets Clueless” than it is anybody’s idea of “The Texas Chain Saw Massacre meets Teen Vogue.” Which is to say that there is more tension in the first act, when we’re not immediately sure what kind of movie we’re in—once Bodies settles into the familiar “Ten Little Indians” rhythm that we’re accustomed to, where we have one colorful character after another being picked off to narrow our options of who the killer might be, the movie becomes less tense, more playful. Like a play actually, literally, which makes sense given Reijn and screenwriter Sarah DeLappe both come from theater backgrounds.

And we will probably be getting a lot of these single location / small cast type of movies coming out now with all of the COVID shooting-restrictions that are these days in place, but we might not get a better one than this. As ostentatiously unsightly as David’s parent’s house is, it’s a hell of a location—a sprawl of claustrophobic man-caves and cramped staircases, wall-to-wall carpets that look soggy with overpriced Champagne and matted Lunchables dust. Though the lights go out quick in this movie and we’re left to wander this home in the dark alongside these characters I don’t think I could get a handle on this house’s layout even in broad daylight with a map. It’s Lifestyles of the Rich and Famous on an stretched-tight upper-middle-class budget, aka the American-iest Dream—just give us more of it, we demand! More counters to do coke off of, more hallways lined with more closet doors, more ugly entertainment centers upon which we can pile up all of our outdated Xboxes. More more more.

That might be a weird thing to sound off on, but all of that informs the dark satire at the spine-base of Reijn’s cutting and sharp-hearted film. This is the world of this pile of awful, untrusting people—they’re as comfortable in this palm-potted dystopia as they are in their chic flip-flops and cruelly-expensive normcore tees. Bee, underlined ten times in the film’s first act as a poor person, quite rightly feels things are amiss the moment she finds herself in this place where the angles are as off as anything Shirley Jackson ever described. And for their part, all of Sophie’s old friends look right back at Bee as if she’s waiting to take their keys from them. Lots will and should be made of the generational japes and of the social media slams that Bodies Bodies Bodies embodies, but it’s first and foremost and devastatingly a class satire with glass shards tucked in both of its designer jort pockets.


← Gather 'Round and Laugh at Dumbass Grifter Hunter Moore, 'The Most Hated Man on the Internet' | Review: 'Bullet Train' Spoils Dumb Fun with White Nonsense →