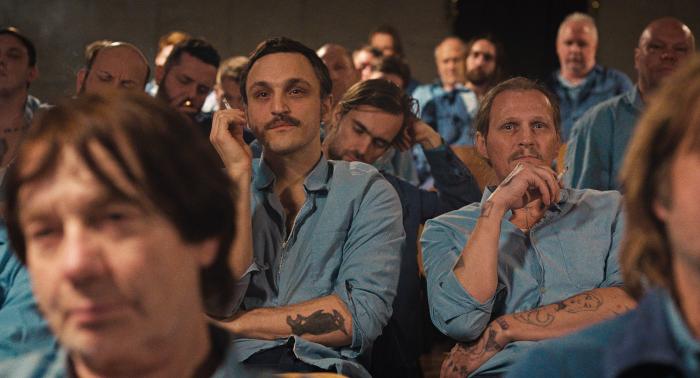 The serial number tattoos that many Holocaust survivors carry on their arms have become such an indelible and sacred image of that horror and its lasting legacy that the thought of blasting that remembrance off of one’s body comes to one today, looking back, as an immediate shock. History, we are told, should not be forgotten—especially one as monumental as that. And so when that precise thing happens as an act of fraternal bonding between two prison inmates in Sebastian Meise’s intimate masterpiece Great Freedom it took me aback. And yet the film by its end makes such rich sense of it. Because what if history refuses to let you go? What if you’re trapped inside the cogs of history-making by virtue of your self, of simply being, despite the shifting of seasons and the changing of the guards? What reminders do you need if there’s no forgetting in the first place?

When Viktor (Georg Friedrich) first notices the tell-tale numbers on the forearm of his new prison roommate Hans (Franz Rogowski, here even greater than he was in Transit and Undine combined) it’s by accident as the skinny, silent young thing shovels the institution’s colorless slop down with an enthusiasm entirely at odds with its culinary presentation. And Viktor too is taken aback. The year is 1945, the second World War has just ended—what the heck is a Concentration Camp survivor doing inside a German prison cell already? We in the audience know the answer though, as Great Freedom has already opened with a found-footage police-reel edit of Hans’ crimes acted out in a public restroom—he’s in here for Paragraph 175, the infamous German law in the books for over a century that officially criminalized homosexual acts.

The Nazis were especially enthusiastic in their enforcement of 175, imprisoning and killing thousands of gay people—this is where the pink triangle comes from as a reclaimed symbol of gay power, of course—but both before and after the war the Germans (as with every country) had no trouble with the criminalizing of super fun sodomy and all its entertaining iterations. And so it’s straight from Auschwitz to the jailhouse for Hans, do not pass go, the distinctions between his captors barely glimpsed via slight changes in uniforms. (Part of the prisoners’ workload that we watch involves them symbolically de-stitching Nazi insignia off of outfits for the clothes’ continued usage.) And so what’s it matter who’s stripping you naked and tossing you into a lightless cell, as long as it keeps happening? Time is a flat circle if what you mean is a shackle around the throat for some.

Indeed when we first meet Hans he’s so quietly resigned to the process he does the stripping and cell-blocking voluntarily. Meise’s film is triangulated between the three decades between the war and Paragraph 175’s reformation in 1969 (the law wouldn’t actually be repealed until 1994), and it’s there in the latter period where we first meet Hans—some effort is done with hair and make-up to distinguish Rogowski and Friedrich between each of these time periods, but Meise smartly leaves most of the heavy lifting up to the performers to define. Smartly because his performers are more than capable of it. Rogowski fluctuates outward signifiers like his body-weight and mustache-lengths, sure, but it’s all there written on the curve of his spine, in the black pools of his painfully soulful eyes, what the passage of time gives and takes, and then takes again, from this man.

It’s tremendous work from one of the great actors of our age—a showcase for his ever limber physicality, where a man so relentlessly abused for existing still manages to find ways to exist, system after system be damned. You always know right where Hans is even as he’s saying very little, and even as what he does say is never the actual thing of it. Hans, in the face of near-constant degradation and sadness, keeps finding ways to turn the wounds, the tattoos forced on his body, into something altogether different. He and Viktor might not turn them into anything outwardly beautiful; indeed the fresh tattoo they come up with resembles nothing short of a big black blob on Hans’ wrist. But they make it together, and it means something to them, and Great Freedom makes us see and feel the great beauty in that.

Indeed for a film that sounds on paper as depressing as I’ve no doubt made it sound, I found the experience of watching it (and I’ve seen it twice now) nowhere near the parade of trauma you might be expecting—Rogowski and Friedrich are such fascinating performers to watch navigate this unspoken and fractured arc, from strangers toward the most profound intimacy, that even as the film treads depressing places it feels, in its way, like the grandest of romances. Great Freedom is a love story set in a world (quite like our own!) that hates and fears love, one that has no place for it. No place except everywhere, of course—love’s everywhere. On battlefields and deathbeds. Maybe twisted into something nobody knows or can see except the ones doing the loving—an underground maze of sex acts and discreet nods, color-coded accoutrement. It’s been spoken in secret languages across time. And nobody, not even our worst selves, can or will ever stop it. One person’s sickness will forever be another one’s song.