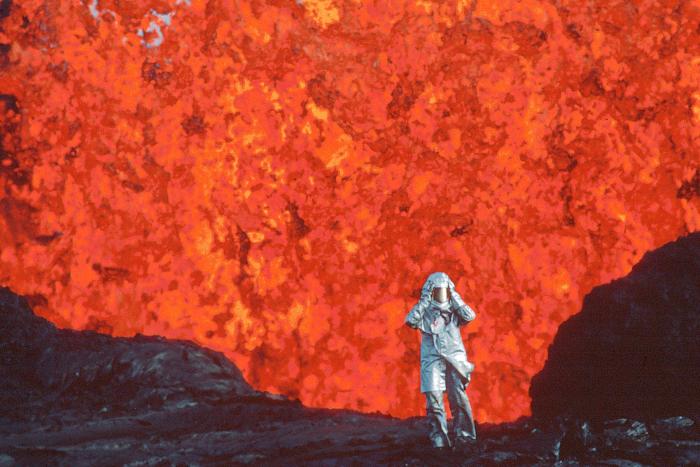 Review: ‘Fire of Love’ Shows Volcano Geeks in Love to a Fiery Backdrop

The awe-inspiring power of nature is tough to replicate. Cinema has spent decades trying to capture the magic, be it through practical effects or retina-burning CGI displays. Even the most artful attempts cannot help but pale in comparison to the real thing, as anyone who’s spent days of their life devouring David Attenborough docuseries can attest. For married scientists Maurice and Katia Krafft, the indomitable inferno of the volcano was their playground. Both dedicated to studying the mighty fires of our Earth’s surface, they pioneered the documenting of volcanic eruptions. Daring to edge within feet of life-threatening lava flows, the Kraffts helped to film some of the most astounding coverage we have of erupting and active volcanos. That they died together following an incident on Mount Unzen in Japan seems painfully poetic, the most logical and desired conclusion to a pair of lives defined by their adoration of the planet’s power.

Their footage, which is plentiful and has been viewed extensively over the decades, speaks for itself, but for the documentary Fire of Love, the real story is their unique romance. Bound together by their respective fascinations in volcanology, the Kraffts chose to forego the tenets of a supposedly normal life in favor of traveling the world from eruption to eruption to record every detail as it happened. Their footage is majestic, brought to life here with crispness and engulfing audio. You can’t help but be taken in by it all, as hypnotized by the sheer force of nature as the Kraffts are.

Not only were they excellent scientists but they were filmmakers with flare. While Maurice downplays his skills behind the camera, Fire of Love makes clear how savvy the couple were in crafting their work to be as appealing as possible to the wider world. We get a sly insight into the multiple takes they did to capture certain moods or a sense of awe, although it’s also fair to say that even the most perfunctory of videos would be impressive given what was on display. This was a couple who rejected the staid mores of traditional scientific research in favor of something a little more rock and roll. For the Kraffts, it’s futile to try and understand the earth from a distance.

To the Kraffts, every volcano had its own personality, its own opportunities for understanding. They soon learned to distinguish between two different sorts of volcano: the ‘red’ type, with the near-iconic rivers of lava, and the ‘grey’ type defined by explosions of ash and dust. They discover connective tissue from eruption to eruption but, as the documentary asserts, the unpredictability of nature always wins out. Efforts to warn local governments of impending disaster are ignored, leading to one of the rare moments where we see the Kraffts seem truly humbled by the volcanoes.

With Miranda July on narration duties, some of the film can’t help but feel knowingly twee. Her distinctive voice, the timbre of a Sundance indie heroine who goes on quirky adventures, brings a wry humor to certain moments. Maurice’s eagerness to ride a flow of lava in a canoe is talked about with the appeasing tone of a parent trying to calm down a toddler. Mostly, though, it’s prone to a kind of cuteness that doesn’t always seem accurate to a pair of adults who were as unabashedly badass as they were. Brief animated scenes add to the sense of this relationship as being almost quaint, the film crafting an aesthetic around them that’s more Wes Anderson than nature documentary. The intricacies of their relationship aren’t explored beyond the simple appeal of them being in love and sharing a common obsession. It’s certainly interesting grounds for exploration but you often get the sense there isn’t much else to say. Sometimes, people are just in love and have cool jobs. But when the volcano footage is this awe-inspiring, it’s easy to overlook the faults.

The Kraffts have been the subject of other documentaries, most notably 2016’s Into the Inferno, directed by Werner Herzog. His approach is a tad more morose, its focus less on the Kraffts themselves than the fetish for danger that seems to be a requirement for people in this field of work. To embrace a life on the edge of fire is to be welcome to, even thrilled by, the prospect of your own death. Fire of Love gets this, but is far less fatalistic in its understanding of such a commitment. The magic of the Kraffts is in the joys they seem to find in embracing oblivion. Maurice talks of life outside of volcano chasing as a kind of prison, so stiflingly boring that it’s unfathomable how anyone is expected to live like that. He even says at one point that, if he could eat rocks, he would never leave the mountainsides. They seemed to know what fate held in store for them and did not run away from what increasingly became an inevitability. For Fire of Love and its romance-focused narrative, there’s beauty in this, although it is careful to not fetishize what often feels like a suicide mission.

While Fire of Love is often too ornate for its own good, when it lets nature speak for itself, the results are endlessly gripping. The ferociousness of reality ultimately buoys the film when its central conceit of a love story for the ages struggles to be more than an intriguing set-up. Volcanoes are just much more interesting than most people.

Fire of Love is in theaters now.