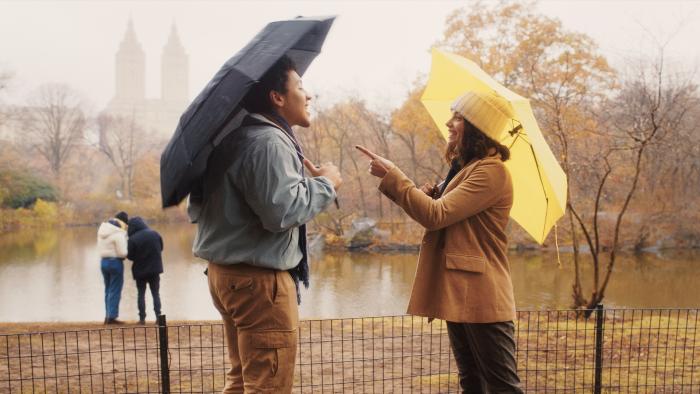 Technically Dating & New York, writer-director Jonah Feingold’s new millennial-centric rom-com hitting theaters and digital on Friday, lives up to its title, as it does indeed contain both “Dating” and “New York.” You could chalk that up as a success! From there you just add in some tumbleweeds and “it eventually ended” and that’s your success column for you, in full, as otherwise what this movie does with “Dating” and with “New York” is enough to put a person off of both for life. By its end credits I’d just about sworn myself to Celibacy in New Jersey. Egads, aghast, et cetera. Oh it’s bad.

Let’s start with the first half of the film’s title since “Dating” is the plot’s focus, as much as this thing has a plot and not just an endless series of interminably smug conversations between self-obsessed naïfs. Attractive twentysomethings Wendy (Francesca Reale) and Milo (Jaboukie Young-White) meet “cute” (I suppose) on a dating app and sort of hit it off—enough to sleep with each other anyway—but they’re both looking for different things relationship-wise. As in he sort of wants one (with her at least) but she sort of does not. Several weeks pass, they ghost each other into the rear-view, when Wendy texts Milo an urgent message. They must meet, most urgently! Naturally Milo thinks scary thoughts of pregnancy, but no, Wendy has given birth to a plan instead—they got along well enough, right? So why not try a friends-with-benefits type of thing?

Nevermind that it didn’t seem like they got along well enough in the first place since they seem like people who are merely waiting for the other to finish their sentence so they can share their clever retort—everyone in their lives and everyone in the audience knows that this contract will go terribly wrong. But Milo and Wendy insist they’re way hipper than all you losers, and set about doing everything a couple in a relationship do, just with the pre-proclaimed determination to fervently deny that label. Millennials do hate labels! So they spend all of their time together, they snuggle and have sex and bicker about mundane baloney, but don’t you dare call them boyfriend girlfriend or they’ll put you on blast.

Of course they are wrong and feelings develop, yadda yadda it gets complicated, they stop speaking… just to one another unfortunately; if these characters stopped speaking altogether there’d be another X mark in this film’s success column. But no they still find plenty of time and the means to speak—-their mutually insufferable best friends Jessie (Catherine Cohen) and Hank (Brian Muller), who also met “cute” right about the same time, bear the brunt of it (as do we in the audience forced to listen in). And so these two relationships, one effortless and one wildly effortful, are I suppose meant to offer us a panorama of modern romantic possibilities—-dating in the tech age, Oh Em Gee Golly! But really it’s just four not-interesting straight people play-acting at being interesting while being anything but. (I mention “straight” because we do see a couple of nameless lesbians at one point, but they’re just there to be made fun of by our leads, haha.)

Which brings me to the “New York” half of the film’s title, and I think wrestling with the lifeless way this drudgingly heterosexual movie portrays my hometown gets to the heart of why this movie rankled me so thoroughly. Dating & New York opens and closes with old-fashioned painted credits of your typical Manhattan environs—if your first thoughts are of Walt Disney, something like Mary Poppins, well you’re not wrong; the movie leans into that vibe hard. Alongside these painterly images, and over a cheerful chorus of strings, in sweeps the narrator telling us with his most apple-cheeked yet lightly snarky delivery of this magical place, of “Happily Ever After”s for everybody—Dating & New York clearly thinks it’s here to modernize fairy tales for us; a cyber Cinderella. So edgy, so hip!

Having lived in and loved in New York for over two decades now let me tell you that the mere idea of the Disneyfication of this place is to any of us who care about it, in actuality, a dirty word. A concept that is supposed to make a New Yorker’s hair stand on end; we spit it out like the religious do the Devil’s name. And yet every character in Dating & New York seems built from the ground up on this foundation and its inherent righteousness—Milo at one point “jokes” to his finance-bro bestie how he wishes the local old-school bodega was more “bougie” and such sentiments in actuality shoot like arrows through the heart of anyone who loves this place; to anyone who has wept at the Guiliani / Bloomberg era eradication of its personality in favor of endless bank-fronts.

These characters are bank-fronts; this movie could be a covert Capital One commercial and I wouldn’t be surprised in the slightest. These people have all the character of cardboard cut-outs shaking hands with a real estate broker in a store window. Their gigantic generic apartments decorated by Pier One have the life-force of showrooms; their toothbrushes and artwork are indistinguishable. Their witty repartee reveals no essence, no personhood—they talk about each other talking about talking. Do they have interests outside of the romantic plot they are trapped inside of? Damned if I know, since that’s all they have time for. To tell you how dire things get, the mention of a John Mayer concert comes in electric, a bolt out of the blue. John Mayer! Imagine! It keeps me up at night, I tell ya.